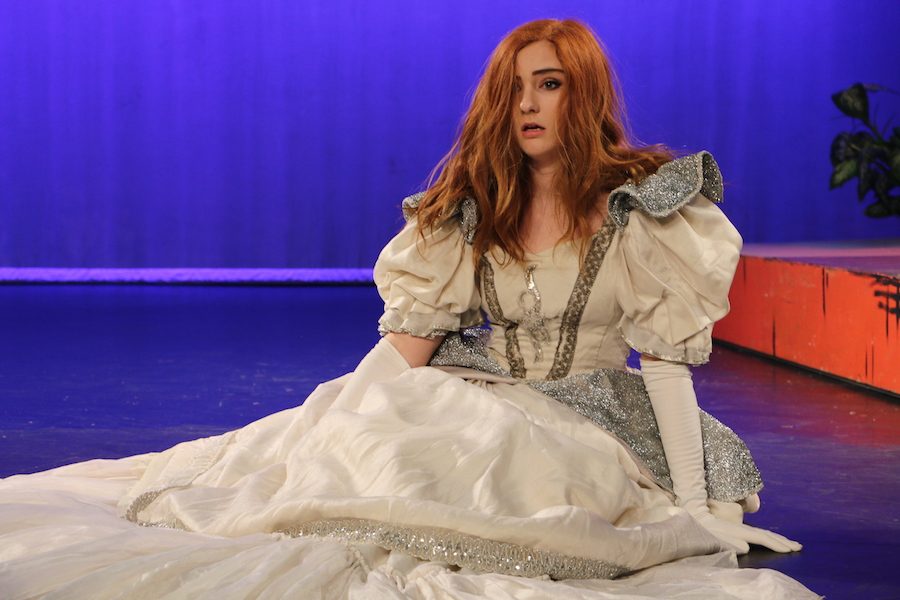 Off Broadway, onto the big screens, and now into West Ranch, “Into the Woods” is a recognizable show that merges many classic fairy tales into a magical storyline. The Advanced Musical Theater class presented a story with witches, princesses, and fairy godmothers in a land of enchantment.

“Into the Woods” is about a baker and his wife who are cursed by a witch and are unable to have children. The only way for them to have a child is to find the cow as white as milk, the cape as red as blood, the hair as yellow as corn, and the slipper as pure as gold. The rest of Act 1 includes the hunt for these objects.

In Act 2, a giant is released onto the land, and a mass slaughter follows. Red Riding Hood, Cinderella, Jack, the baker, and the witch all fight to kill the giant. The ending is far from happy, but it finishes on a realistic note of life and loss.

An interesting part about this production is its use of many principal roles. There are so many stories which connect into one. Each needs a lead actor. This is perfect for the theater department at West Ranch to showcase its diverse talent.

“I am the Baker’s dad. I am a mysterious man. I like to think of myself as a key character because I started it all. In the beginning I took beans from the witch’s garden, so the baker can’t have kids. I think I am kind of important, but people can say otherwise,” said junior Miles Vivirito.

Although everyone had their notable strengths, one actress stood out from the rest, and not in the way you might think. Senior Gloria Zavala did not have a notably large role. Instead, she used every moment on stage as a showcase for talent.

As a cow, there is not much she could do regarding beautiful solos or one-lined zingers, but her facial expressions and body movement carried through as wonderful comic reliefs. The audience laughed as she mooed at the other characters and jumped around the stage. Characters like hers are at the actor’s disposal for interpretation. She made sure that each line had emphasis and was used to its full potential.

The baker and his wife searched for the cow as white as milk, Gloria’s character — Milky White, in order to lift the curse. Suddenly she dies, but the witch is able to bring her back to life. Her milk is then used to restore the witch to her youthful glow.

Gloria could have easily set her role aside as merely a prop, but instead she took the opportunity to create a character with its own personality. “Playing Milky White was a lot of fun. Since there were only a few lines, I was able to be creative and do what I wanted to do. I had a lot of freedom with this role which made this character memorable,” said Gloria Zavala.

Playing Milky White was a lot of fun. Since there were only a few lines, I was able to be creative and do what I wanted to do. I had a lot of freedom with this role which made this character memorable.”

Although Gloria did amazing, she did not have the chance to contribute to another good aspect of the play — the music. Composed by Stephen Sondheim, the score for “Into the Woods” has an interesting dialogue between the pianist and the singer. During rehearsal, the cast worked to time it perfectly. It became an effective way to tie scenes together and make transitions smooth. Over the piano, the lyrics were just as interesting.

Maybe even more impressive than the music was the support and turn-out seen in the audience. Many West Ranch students and community members came to the play. They all supported the program by buying tickets and concessions. Everyone seemed enthralled and intrigued with the storyline. The theater was filled with boos, gasps, and applause for the characters. They were the livelihood of the performance and encouraged the actors on. At the end many gave standing ovations, and some brought bouquets of flowers for their favorite performers.

The cast had been working endlessly for months, so it was rewarding to see such support from their peers. “It’s just been really time consuming. We have been working on this for a whole semester. We have been after school everyday for like two months,” said Haleigh.

Although the play itself was spectacular, time was an issue. The musical was 2 hours, 30 minutes; an amount difficult for most high school students to sit through. The cast could have spent more time on building the first act and ended it there. That being said, “Into the Woods” is a famously recognizable script — any changes would have been noticeable.

While the show was long, every second was enjoyable. It featured some stand-out performers, but it still became a cohesive production. The theater program at West Ranch is not something to miss; be sure to see their next performance in the spring.