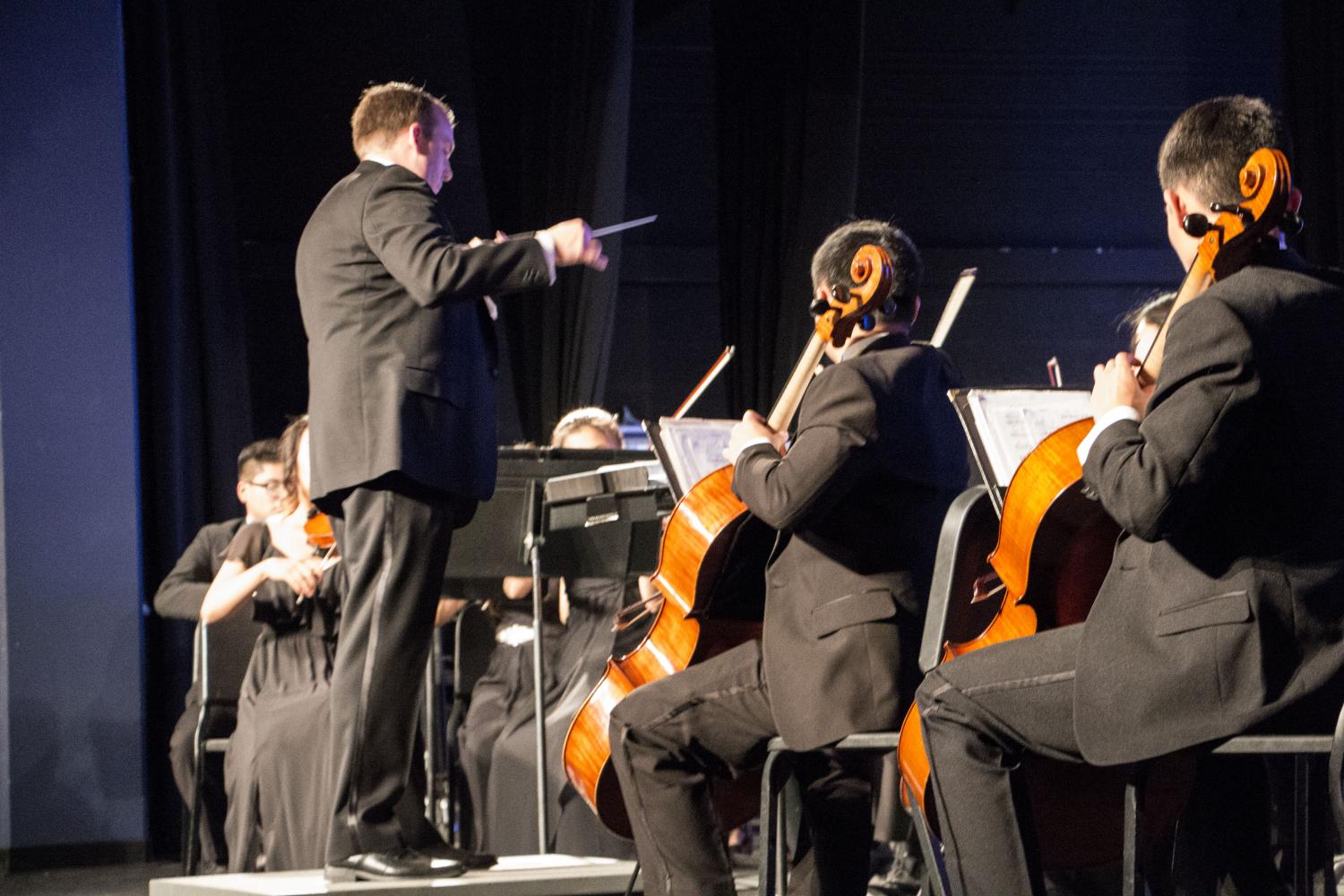 On May 16, I attended the annual West Ranch Instrumental Music 2017 Spring Concert where West Ranch student musicians performed a grand finale of assorted music pieces to finish off the school year.

Playing tunes composed by composers like Soon See Newbold, Todd Stalter, and Gary Gilroy, music teachers Jason Marshall and Brian Leff led the way as both they and the performers sent the crowd into a whirlwind of reminiscence and awe of the melodies dancing in the air.

The first to perform was the West Ranch Concert Orchestra, who walked out onto the stage with sweaty palms, crooked smiles, and short, hard breaths, holding their instruments with one hand and their hearts in the other.

After Marshall walked over and looked down on them with a proud twinkle in his eyes, the West Ranch Concert Orchestra began tooting out the first notes of “Momentum” by Richard Meyer. Marshall conducted their every step, swishing his arm against the rhythm.

I play the violin, because I remember hearing this one piece, a first classical pieces that I heard a long time ago, and it was a violin. I thought it was just so pretty, and I fell in love with it.”

When finished, their faces red and flushed with excitement, the orchestra members stood up and bowed while being drowned with hoots and shouts of encouragement. Their brilliant performances of not only “Momentum” but of “Arabian Dreams” as well had left the audience in a state of longing for more — more of those violins, more of those violas, more of those cellos, more of that music.

“I like more the feeling about being on stage. I just started a new instrument: the bass, and I felt like after that, I finally accomplished it,” said freshman musician Chika Ma.

The next group to perform was the chamber orchestra with Marshall conducting, and they played several melodies such as “The Idylls of Pegasus” by Richard Meyer and “Rhythm Dances” by Brian Balmages.

Both were two solid pieces that hit straight to the bone; however, the one performance that struck out to me was senior Alisa Luera’s violin solo intertwined with the resonating sound of the chamber orchestra, as they played “Three Pieces from ‘Schindler’s List’” by composer John Williams.

A solemn stillness enveloped the crowd, as Luera’s stern demeanor, the thin notes floating into the darkness, and the haunting cries entwined into the tugging melody encapsulated the very mood of “Schindler’s List”: tragic, in despair, and lost without hope.

To the left of me, I could see a girl silently wiping away her tears as she held tightly onto her arms for warmth, trying to keep herself together during the performance.

“It was like the feeling of it. I low-key wanted to fall asleep during the concert, but I remember that those pieces — they actually woke up me up, like they gave me shivers from the way they played it so smooth,” said Ma.

To lighten up the mood, the concert band, along with conductor Brian Leff, marched out with great pride as they roared out “Critical Mass” by Todd Stalter and led the audience on a spine-tingling adventure with Blackjack in “The Rise of the Blackjack” composed by Gerald Oswald. An exhilarating rush washed over me, as the fast-going pace of the beat echoed across the floor.

And, to finish it off, the concert band surprised everyone with a stunning rendition of “A Disneyland Celebration” arranged by Michael Brown; the grandparents who had been patiently sitting near me were now beaming as they tapped along to “Be Our Guest” from “Beauty and the Beast.” Behind me were two girls who sang along while giggling to “Part of Your World” in “The Little Mermaid,” and the atmosphere became somewhat as if Tinkerbell had sprinkled a load of fairy dust all over us. The audience was flying with laughter and rocking out in their seats, crackling with visible happiness.

The final group to perform was the West Ranch Wind Ensemble, who wooed the crowd with “An Obvious Love” by composer Gary Gilroy and took us on a hair-raising “Ride” by Samuel Hazo. It was “Midway March” created by John Williams that let the audience be on their way, as the band’s creative use of the piccolo played by juniors Shane Cho and Yuxin Zhao and the many solos of different instruments created a pleasing harmony for all to hear.

“I really liked the diversities of the bands and how each one had a different set of tunes,” said alto-saxophone player Ethan Styadi.

As the concert came to an end, Marshall, the orchestras, and the bands waved their good-byes and thanks to the audience who had come out on a Tuesday night to support them; as the student musicians hugged and took photos with friends, they also began complimenting each other’s performances.

And while people began to trickle away with the theater quiet once more, the deafening noises of those rich, clear brasses and vibrating movements of the strings still lingered on inside of my ears.

For, as I had just seen in that moment, it was music that had the power to move the heart, the mind, and the soul. 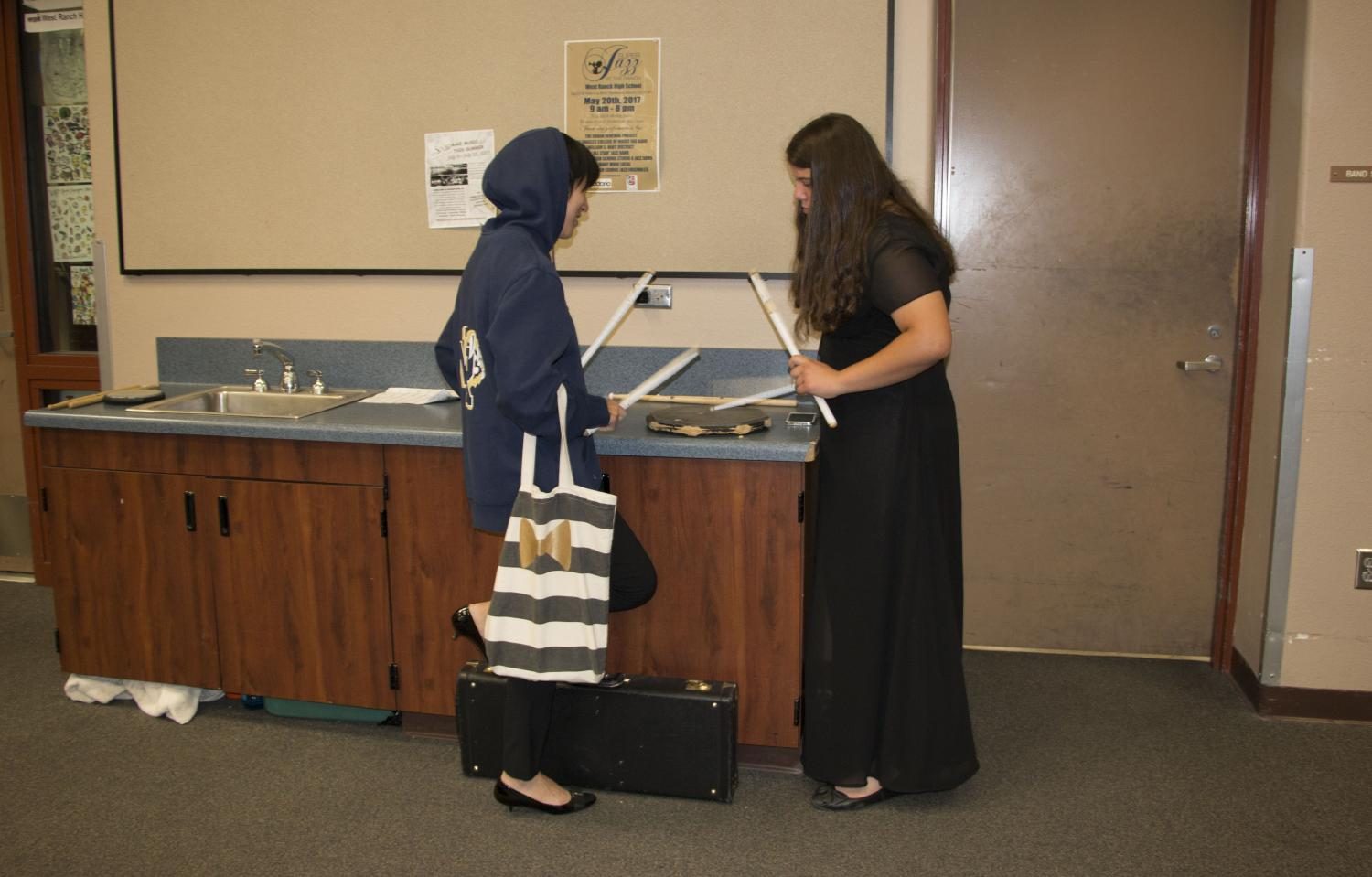