Fear and the Entertainment Industry: A Match Made in Heaven 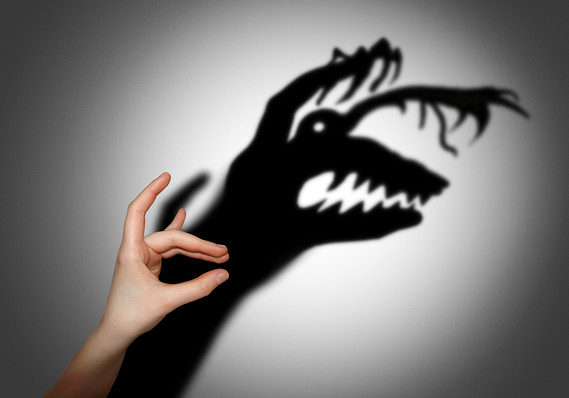 You’re walking in the woods. There’s no one around, and your phone is dead. Out of the corner of your eye you spot him. He’s following you, about 30 feet back. He gets down on all fours and breaks into a sprint. He’s gaining on you. You’re looking for your car, but you’re all turned around. He’s almost upon you now.

Does this scenario sound familiar at all? It’s something you could expect to pull right out of pretty much any horror movie set in the woods. While the exact wording of that scenario is from a parody song circa 2012, the sequence of events is a common horror movie trope. But why is it used again, and again, and again, if we recognize it immediately? That’s because it garners the same audience reaction every time. We become tense and nervous, waiting for that jump scare that we all know is coming. While the likelihood of us being alone in the woods at night with a dead phone and no memory of our car’s location are very, very slim, we’re still scared of the unknown. What’s that rustling in the bushes? You don’t know. And it makes you scared.

Fear is one of our strongest emotions, and with this month being a candy shop for fear junkies, the horror industry is booming. Not all of us love this entertainment genre, though. Some of us would die of happiness if we could hit every haunted house in LA this Halloween. Others wouldn’t be caught dead anywhere near the parking lot of Fright Fest. No matter your perspective on the matter, it doesn’t change where we live. LA. Hollywood. One of the biggest entertainment industries in the world. October is a time to turn out movie after movie, haunted house after haunted house, and to hit every theme park imaginable. But how can they keep doing this year after year if we expect it? The answer is simple: Because we still fear what they give us.

As I’m sure you know, “It” just hit theaters this September. After scarring a whole generation of 90s kids, they just couldn’t stop there, and so now we got our own adaptation. We all know the classic premise of “It,” right? Creepy-psycho-murder-demon-clown Pennywise lives in sewers and loves kids. Loves eating kids, that is. Ok, I’ll admit that’s watering it down just a bit, but still. Pennywise is one of the most well known Stephen King villains out there. And regarding horror movies, he’s one of many. Freddy Kruger. Michael Meyers. Chucky. Pinwheel. Samara. These are some of the most famous horror stars in the world. Now, some of these villains have kind of stupid names, in my opinion. Nonetheless, I will admit that I am scared of insulting these villains, lest I encounter them sometime in the near future (My editor made me do it, I swear!). It’s entirely irrational, yes, but that proves my point. As long as we still fear these villains, they’ll keep remaking them in terrifying, bone-chilling ways.

Horror movies, with their availability, are certainly one of the most common horror platforms. But, living near Magic Mountain, we can’t forget about the theme parks that go all out to give us that adrenaline rush we get every time we jump and run away from that thing over your shoulder (I dare you to turn around). And then, there’s Hollywood Horror Nights at Universal and Knott’s Scary Farm just south of here. People will pay anywhere from $40 to even $300 dollars to go to these parks. I don’t know about you, but that’s kind of overkill, if you ask me. And yet, we pay this and more to have the best experience possible, and sometimes, we get so scared that we swear not to go back. And that very fear is what keeps these parks just itching for something scarier to do next time.

Now, I’m sure you recognize the ever-so-classic log cabin in the distance of that forest, with a single light shining through the window. Or maybe you know of an ancient gothic castle that’s been built on an ancient burial ground? Or you could be familiar with that one giant, dark house in a cheery, bright suburban neighborhood. This scenarios are more horror movie gems, and something you’ll see often replicated in haunted houses across the country. In fact, we can see it in haunted houses right here in LA. One such place is The Witch House, one of the more famous haunted houses in California. However, this place doesn’t exactly take it to the extreme. There are some haunted houses that make you sign a waiver to get scared, and to be honest, that itself is terrifying. What exactly are they going to do to you that requires you to sign a legal document signifying your consent? I don’t really want to find out.

After everything we have in LA designed to scare us, from theme parks to haunted houses, one thing has become clear: we love getting scared. It’s as simple as that. For as long as we like getting scared, we’ll pay any amount to see just who can do it best. And as long as we keep getting scared, the scarier these attractions are going to get. This cycle might sound repetitive, but it’s true. Now, I’d better leave you so you can go enjoy everything this industry has to offer. Go watch a movie. Go to a theme park. It doesn’t matter; it’s all the same result at the end of the day. Have fun sleeping with the light on tonight. Oh, and tell the monster that followed you home, who is now living under your bed, that I said hello.