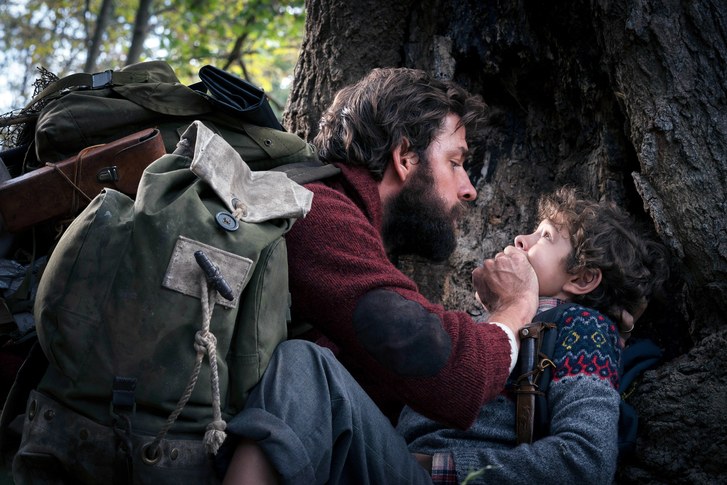 While most horror films these days are so terrible they’re almost funny, “A Quiet Place” is unlike any other. Directed by former “The Office” star John Krasinski, “A Quiet Place” delivers a horror thrill ride for audiences of all ages.

The fear experienced by Krasinski’s character, Lee Abbott, his wife Evelyn, and their kids Marcus and Regan, is palpable throughout the entire film. After most of the world’s population has been decimated by alien-like creatures, the family of four must learn how to survive in a post-apocalyptic world by relying on one another’s care and support. Since these creatures are blind and extremely sensitive to all sounds, the family is forced to live in silence in order to avoid a terrible fate: death.

The family communicates in sign language, not just because they can’t make any noise, but also for their deaf daughter. The father accumulates piles of news articles and research, attempting to find a way to stop the creatures, especially before his pregnant wife has to deliver her baby in a world where sounds can get you killed. “A Quiet Place” plays on every mother’s worst nightmare: having to bring your child into a world even you don’t feel safe in.

One aspect of “A Quiet Place” that sets it apart from other films, aside from the absence of dialogue, is its sharp attention to detail. Instead of walking on a dirt path ridden with crunchy leaves and twigs, the family walks on a path of sand that they’ve created themselves. At dinner time, the family eats on leaves of lettuce to avoid making clanging or tapping noises on plates. The incredible visual storytelling orchestrated by Krasinski draws you in as an audience member, almost as if you’re living in the post-apocalyptic world with the family of four.

I especially loved watching “A Quiet Place” because of its message. It reveals the depths we go to to protect our loved ones, even if we have to put ourselves in danger. Instead of having to watch a fake exorcism on the big screen, I really enjoyed the family dynamic presented throughout “A Quiet Place.” It was incredible to be actually engaged in the film and feel like I was fighting for my own life against the dark creatures, something I’ve never experienced while watching a typical horror film.