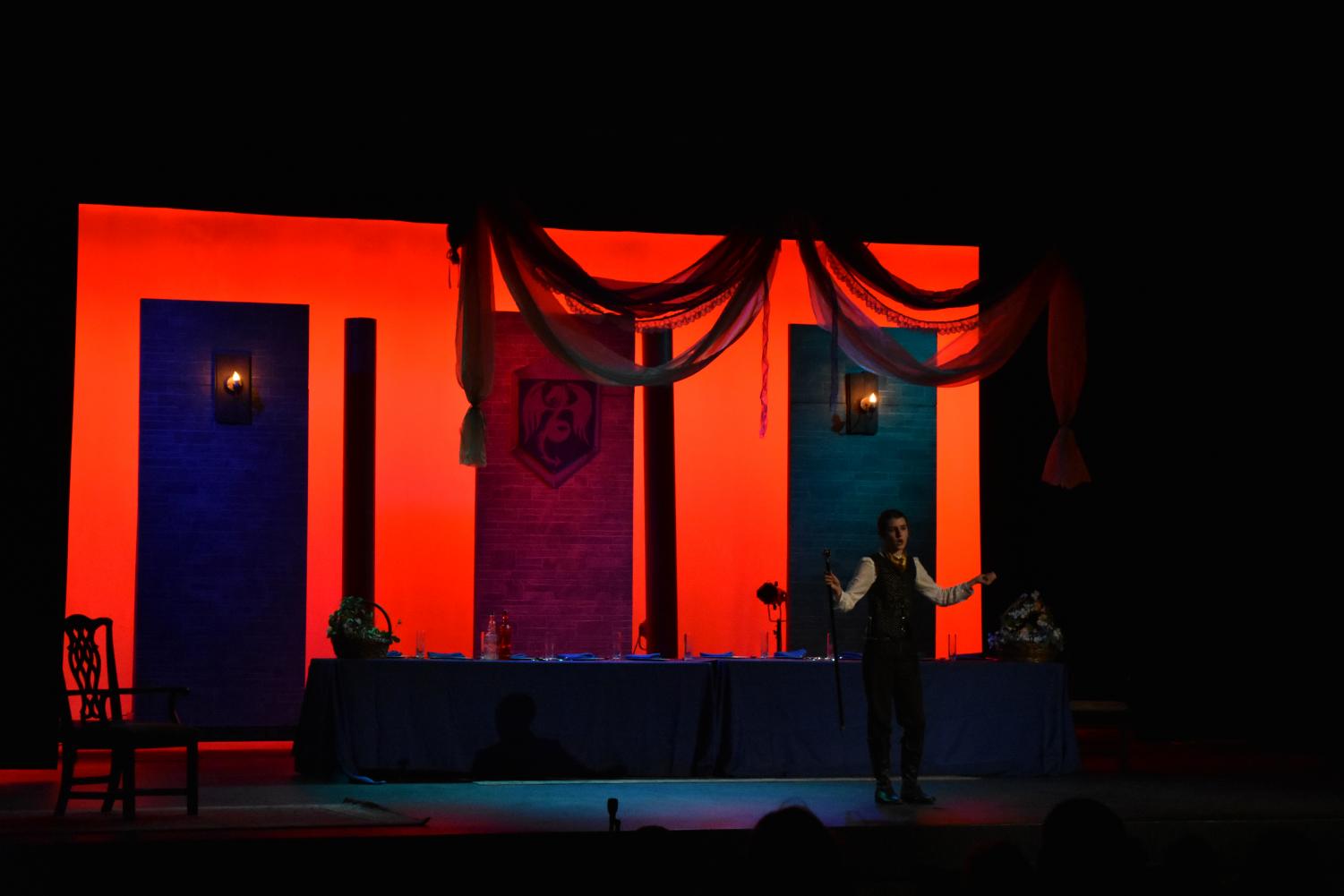 “All my life has been an illusive impression,

Every moment swept away…

All hope without a gain.” 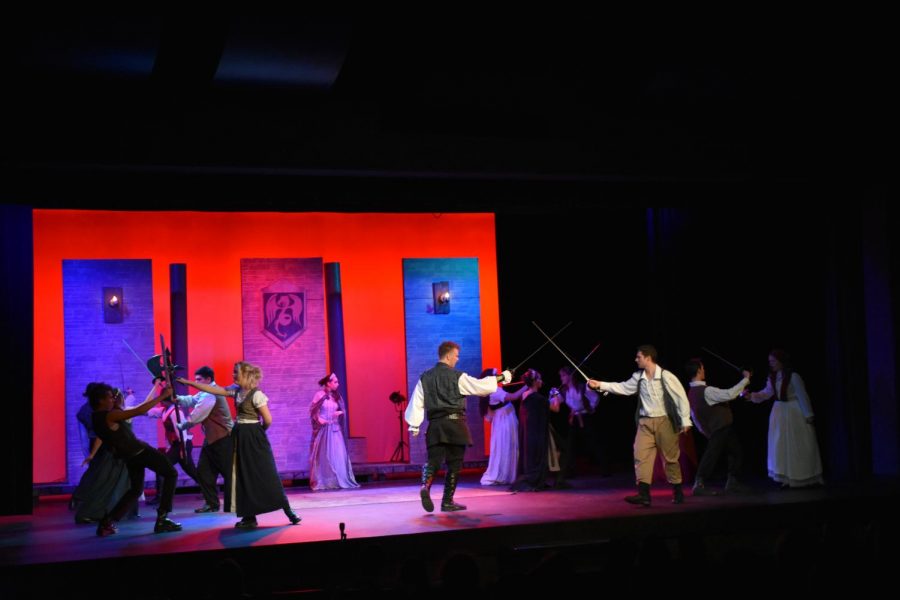 A chilling breeze whistled through campus on the nights of Feb. 6, 7 and 8, whispering of mysteries. If you took a few steps into the theater hall, you’d begin to hear the phantom harmonies, you’d see the regal castle walls, you’d feel the looming danger. Although this may sound like a scene from Broadway, it all was part of “Illusive Impression,” a musical written right here at West Ranch.

The Paw Print had the privilege of interviewing Arnold and Davis to learn about their hard work behind the scenes. When asked about the themes of their original play, Arnold was eager to share.

“The show is all about ‘don’t aimlessly follow your emotions, because it will lead to destruction,’” said Arnold. Destruction was more than evident in the show’s events. Beloved characters fell to the floor as death overtook them. The maniacal laughs from arrogant Prince Park and the mysterious narrator echoed through the room — quite often — as each tragedy unfolded.

“Illusive Impression” began with a cheerful scene filled with busy servants as they prepared a wedding for the castle’s betrothed princess. But the bliss soon morphed into betrayal and suffering as the princess’s true love, a humble servant, was murdered in cold blood. Plot twist after plot twist left the audience fidgety with curiosity and emotion in their seats.

The play was chock-full of intertwining storylines, romances, heart-wrenching ballads and dark ironies. Three faux stone pillars, backed by an eerie red light during particularly dark scenes, lined the back wall of the stage. Shadows created ghostlike impressions of the actors that floated creepily across the set. Between massive sword fights and bouts of sobbing, the audience couldn’t decide whether to cry, scream or laugh, so they bit their tongues in anticipation.

Arnold knew she wanted to write a play for a long time, but first laid out her ideas for “Illusive Impression” in May of 2017. After sketching a crude outline of the story, her dream began to take shape, and her partnership with the cast began.

“I got my two friends Eva and Becca to help edit what I’m writing because sometimes I don’t make sense,” said Arnold. “And then sophomore year, they introduced me to Connor because they were friends with him, and I was like ‘wow you’re good.’ And we’ve just stayed together since.”

“I remember singing ‘A Once Great Man’!” Davis interjected with a smile.

“I fell in love with a once-great man,

Davis, who produced all of the songs, also played the role of Spencer. The peasant boy belted out heartwrenching notes about unrequited love for a servant whose heart had been stolen by the rich Prince Park.

The actor, singer and producer revealed that the process of making music was very emotionally-guided.

“We took the emotional content of what she was trying to get across and put it into music. We would literally sit down at the piano, go over the song and try to come up with things that would have a melody, have emotional content,” he said.

Last year, he assumed the role of musical director and taught songs to the cast.

“But this year,” he explained, “we had so much more time to do that, and so it sounded better than it ever has. The harmonies really came together and it was cool to see the music we wrote being sung by them.”

“To touch on that, like, musical theater is not full of people who are musicians,” Arnold clarified. According to the playwright, most of the time, only the “musically inclined” sing harmonies.

“This is like the first year that the entire cast has sung a three-part harmony for every single song. And like, it was kind of amazing to see Connor be able to teach the cast and people who have never read music before to be able to sing something that wasn’t the melody,” she beamed.

So how often did the pair need to meet to finish writing and producing songs for an entire two-and-a-half-hour production?

Arnold seconded his statement. “We met every day at lunch. And then, in junior year, we met a lot after school.”

“It took the entire day. I didn’t get any homework done. And then I would stay up till 5:00 in the morning doing homework,” Davis admitted.

After she’d finished writing the lines, polishing the lyrics, picking the cast and helping produce the show, Arnold got to exercise an even higher honor: directing. She admitted that directing her own work has been her favorite part about senior year.

Although Arnold strengthened bonds with the cast, she grew the closest with her characters as she watched them leap off the page and onto the stage. Among the spirited servants, delicate princess, evil royalty and sarcastic executioner, she found herself partial to one person.

“Prince Park is definitely my favorite character,” she explained, “because he’s the villain the whole time, but in the end, it’s like, ‘wait, but I don’t want to hate him anymore.’”

The student-created, student-directed and student-produced play still needed some guidance from West Ranch’s theater teacher, Mr. Cook. Arnold expressed extreme gratitude for his generosity in giving them the stage and directing responsibilities.

“He explained what looks best and which parts of the stage are the most important parts. Downstage left is where the audience tends to look at the most, so that’s the most emotional part of the stage. I wouldn’t have known that without Mr. Cook!” she exclaimed.

Despite the title, the talent behind West Ranch Theater’s latest production is no illusion. The thrilling, immersive production is the child of hard work and unafraid creativity. Arnold, Davis, Gibson, Waegner and the entire cast stunned the audience, and their performance is not easily forgotten.

“Our whole lives have been an illusive impression,”

“Our whole story was an illusive impression.”

Look out for a full feature on Arnold and Davis in the senior issue of The Paw Print!