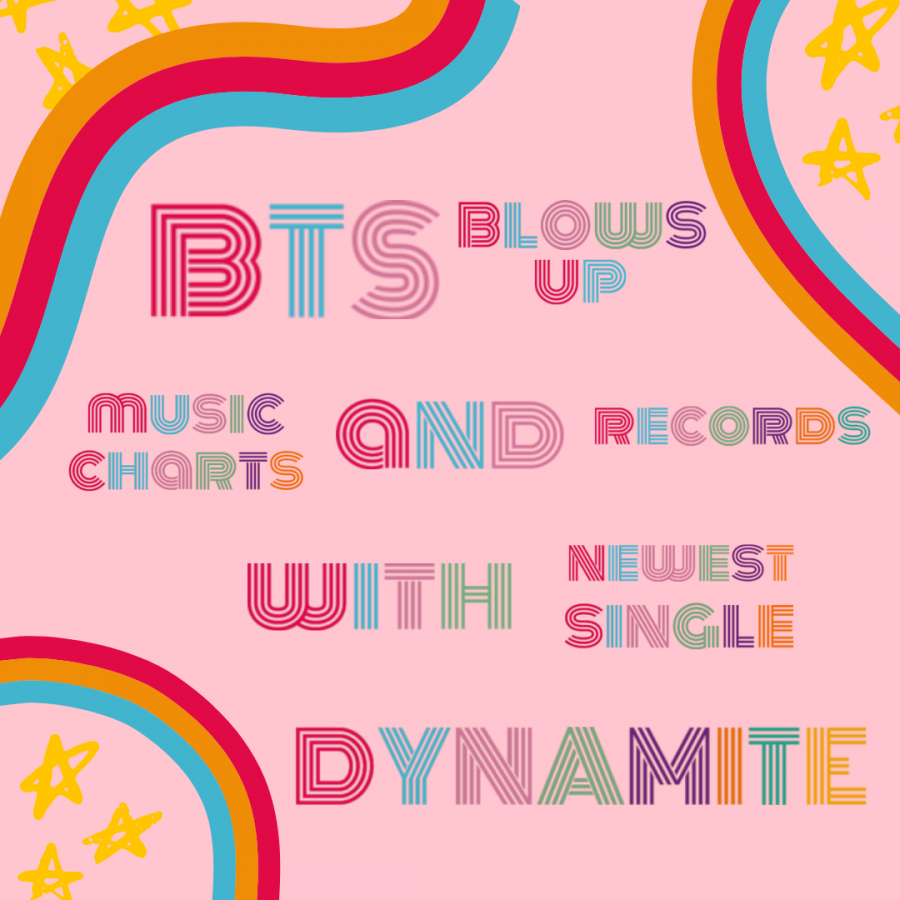 After weeks of anticipation, BTS — the famous South Korean boy band of seven — made headlines once again with their newest single “Dynamite” on Aug. 21. The group, consisting of members Jin, RM, Suga, J-Hope, Jimin, V and Jungkook, achieved its first No. 1 on the Billboard Hot 100 songs chart with this first all-English single.

In addition, they also set the record for the first all-South Korean group to lead the Hot 100 as well as the biggest digital sales week in nearly three years. According to Nielsen Music/MRC Data, “Dynamite” roared in with 33.9 million U.S. streams and 300,000 sold in just its first week. Among groups, the song hit the biggest weekly digital sales sum since Prince and the Revolution’s 1984 classic “Purple Rain.”

The 28-second teaser previous to the official release quickly became the most-viewed music video teaser in 24 hours and the official music video soon followed as the fastest YouTube video to reach 10 million views.

West Ranch High School Junior Julia Jung claimed, “a key highlight of the single has to be the music video. The video is so carefree and full or color, bringing good vibes. With the song being in English, I think it was able to reach out to a wider audience since international fans can easily sing along and understand the lyrics.”

The popular music video featured a poster-studded bedroom with tributes to David Bowie and The Beatles, as well as a record store with aesthetic backgrounds all around. This video also set the ‘70s and ‘80s vibe by featuring the group decked out in vintage-inspired outfits.

The official BigHit website introduces “Dynamite” as a disco pop single that brings the much-needed energy to reinvigorate the community. The choreography is described as edgy and upbeat, with addicting movements featuring shoutouts to Elvis Presley and Michael Jackson’s iconic kick.

The catchy lyrics were written by David Stewart and Jessica Agombar who are famously known as the songwriters behind the recent “What A Man Gotta Do” by the Jonas Brothers. Stewart and Agombar thought of catchy tunes and lyrics that fans could easily follow in the chorus like, “So watch me bring the fire and set the night alight / Shining through the city with a little funk and soul / So I’ma light it up like dynamite.”

As for their meaning behind the single, BTS member Suga claimed in a recent global press conference, “We wish we could give you strength in this time of exhaustion…we hope that a lot of people cheer up and take comfort in the song.” Leader RM went on to say that “We’ve been through all the sadness and desperation but with this song and performance we just hope the world gets more positive and be happy.”

The DailyTrojan reports, “the 1970s-80s inspiration, infectious beat and uplifting lyrics all make it a fierce contender for the song of the summer and gives viewers a much-needed boost of energy during these hard times.”

Overall, the song was able to be so popular by providing comfort and light during a time of unprecedented isolation and uncertainty for global fans. Cats, make sure to stay positive and safe during these tough times!