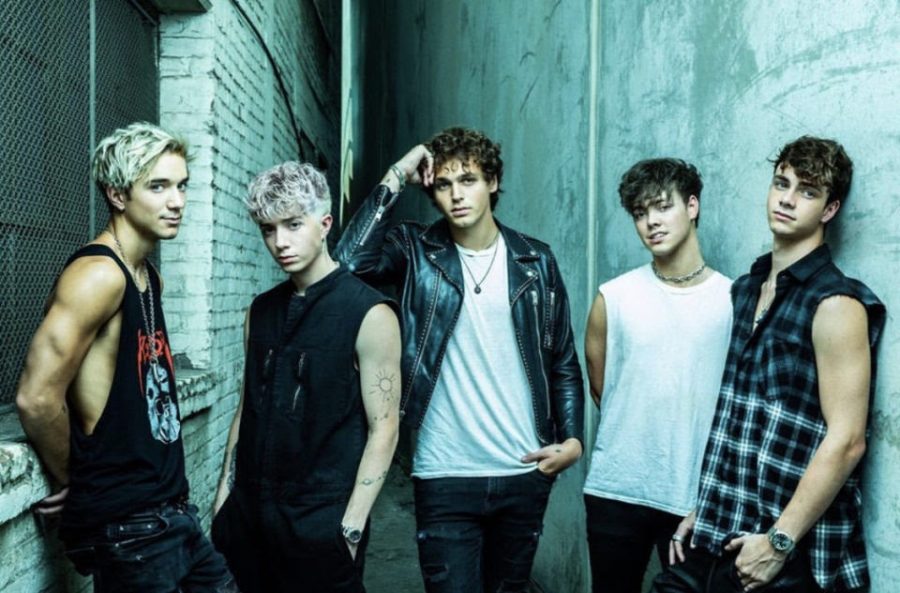 On January 25, boy band Why Don’t We logged themselves off of social media and laid low from the public. They were gone for over nine months and have only recently returned. However, where was the heart-throb music band during 2020?

In an interview with People magazine, band member Jonah Marais said, “As amazing as social media can be, it can be a toxic place as well and it was nice to delete the apps off of our phones for a bit.”

The band decided to take a break from social media to focus on writing their second studio album, and wanted to get away from the pressures of the internet.

“I was disappointed but I thought that they did need the time to work on the album.” explained Kayla Koontz, a West Ranch freshman. Many fans are understanding when it comes to the band needing a break from the public and focusing on themselves and their music.

Their return began with an immediate drop of a new song. On Sept. 29, Why Don’t We

released their newest single, “Fallin.” This new single was written and produced by the band itself, and many fans pre-ordered signed CDs. Its tune and vibe are inspired by Queen and the song “Electric Love” by Børns, according to Paper magazine.

Although “Fallin” has only been out for a short time, 8.3 million people have streamed this single on Spotify, and it is reported to have hit Billboard’s Top 100 Charts. Since its release, fans have enjoyed the new song as well as the music video. West Ranch freshman Keeley Baumann loves the “very catchy song” and especially “the beat of the music.”

Another reason the band went on its hiatus was because four out of five of the band members did in fact catch COVID-19. This can be confirmed by the video “The Making of Fallin’: Episode 2” that was posted to their official music channel. The video is the second episode of a series that the band is producing to showcase the process and the precautions they took to produce the song with the pandemic.

Precautions consisted of band members going to the studio fully masked and dressed in hazmat suits. In between each of their recordings, a portion of their crew would go inside the recording studio and wipe down everything that the member prior touched before allowing the next one to enter.

Over the course of their break, the band came up with new music for possible future albums and singles. Fans are growing eager and are excited to see what the band has produced.

Who’s Why Don’t We?
Why Don’t We consists of five members: Zach Herron, Daniel Seavey, Corbyn Besson, Jonah Marais and Jack Avery varying from the ages 19-22. Each of the members all began on YouNow, a popular streaming website back in the 2010s according to J-14, teen magazine and radio station.

Eventually, in September 2016, they came together as a band, and wrote their first single together, “Taking You.” They produced their music with Atlantic records, whom they signed with.

Back in 2017 the band wrote five EPs in just twelve months, and eventually released their first album in 2018 called “8 Letters.” The album debuted in the top 10 on Billboard 200 at #9 and immediately blew to #1 on iTunes, which resulted in a sold out international tour according to the Why Don’t We official website.

In 2019, Why Don’t We came out with twelve singles, dropping one song for every month of the year. They worked with Ed Sheeran and other song writers to produce them. Their songs tend to be highly instrumental and pop, along with forms of techno.

The band has worked with a variety of celebrities including Charlie Puth, Ed Sheeran, Liam Payne and Logan Paul, receiving a number of awards such as the Teen Choice award for Choice Music Group in 2019, according to Seventeen magazine.

Beyond this, according to Spotify they have over 1.4 billion streams and exceeded 560 million total views on YouTube. Why Don’t We has also been featured in Billboard Top 200 multiple times. They also have five million followers on Instagram.

An announcement of a new album has been teased by the band as they mentioned how production has been in the works for multiple months. Fans are excited to listen to the new variety of songs once dropped, and are eager for the release of new music videos as well. The album does not have a set release date, but is expected to drop before 2020 ends.

Why Don’t We has been able to accomplish an abundantly successful career in just a few years, and have taken the world by storm.