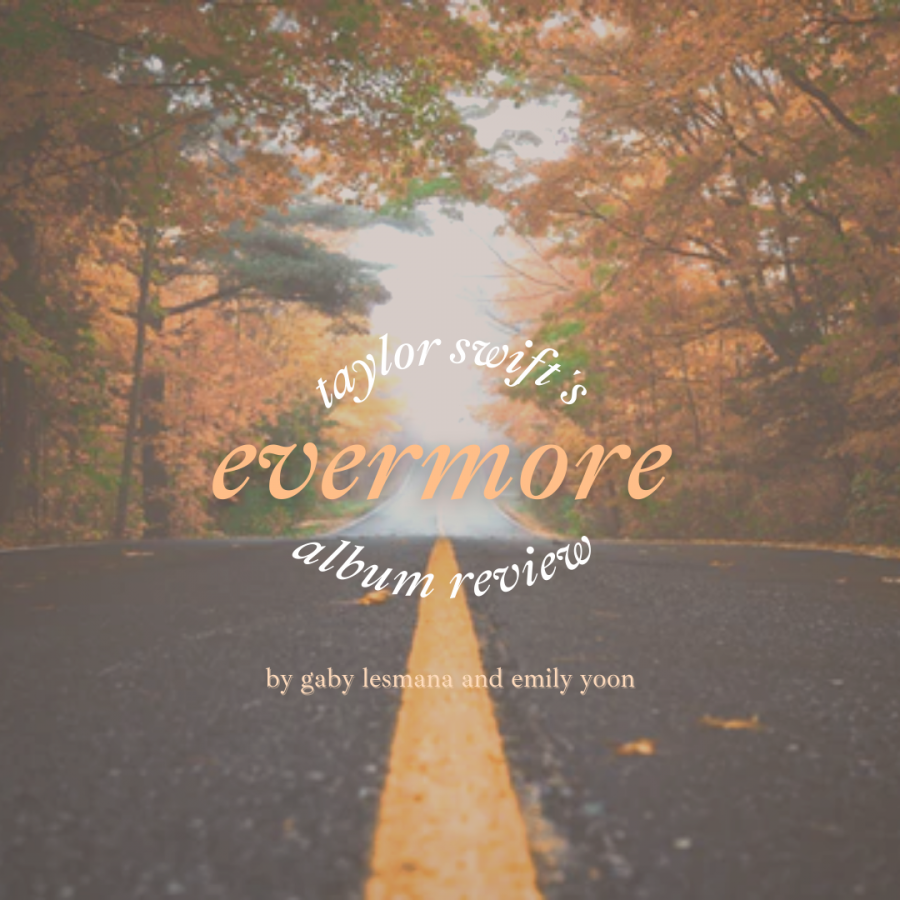 In August, The Paw Print published a review of “folklore,” Taylor Swift’s unexpected venture into the world of indie folk and alternative music. The summer surprise release was met with excitement, gratitude, and, as with all Swift albums, a bittersweet relish: the knowledge that Swift always sheds the sound of an album only to arrive anew at a completely novel aesthetic and genre of music.

But Swift, as she proclaims in the “evermore” song “cowboy like me,” had a few tricks up her sleeve. “evermore,” announced the morning of its Dec. 11 release on Swift’s social media, would be Swift’s first sister album—instead of assuming a completely new genre for her ninth studio album, its soft woodland charm is akin to that of “folklore.”

Swift and collaborators describe “evermore” as “dreamscapes and tragedies and epic tales of love lost and found.” Her journey into the “folklorian woods” was accompanied by familiar faces: producer extraordinaire Jack Antonoff, “The National” singer Aaron Dessner, Bon Iver frontman Justin Vernon and Swift’s boyfriend Joe Alwyn, who goes by the stage name “William Bowery.” Swift also invited her longtime friends, the three-piece sister band HAIM, for a feature on a song.

Like “folklore,” “evermore” is a loose concept album: instead of speaking strictly about her own experiences, Swift weaves character-based narratives of heartbreak (“champagne problems”), fame (“dorothea”) and even murder (“no body, no crime”). Swift also retains her crown as master of love stories with tracks like “willow” and “ivy.”

As Swift said herself when the lead single “willow” premiered, it is about “intrigue, desire and the complexity that goes into wanting someone.” Swift describes the sound as “casting a spell to make someone fall in love with you,” she commented on the “willow” YouTube music video. The whimsical, folksy guitar background track sets the tone for the album. As the lead single from “evermore,” it strategically sums up the songs’ storytelling style.

Swift certainly lives up to her name by making tears flow two songs into “evermore.” Although she continues with a signature stripped-down piano ballad, “champagne problems” is no conventional breakup anthem: it injects the melancholy melody with the guilt of breaking off a relationship with someone you still love.

Although Swift titled the third song “gold rush,” it’s not necessarily describing the 1849 California phenomenon that had everyone and their mother panning for sweet sparkly dust. But Swift actually pans for love in this song that playfully dances the line between vivacious and bittersweet. Combined with Swift’s tongue-in-cheek, purposefully ambiguous lyricism, “gold rush” simultaneously spins a story of imaginative longing and leaves you wanting more.

In “‘tis the damn season,” Swift tugs at holiday sentiments without making the song sound too “Christmas-y.” She reminisces on her favorite memories of winter festivities while keeping the whimsical, fairytale-feel of the album.

Among her fans, Swift has been known to strategically choose a vulnerable, heartfelt song as track 5. “tolerate it” is no exception: with its somber piano accompaniment and the heartbreaking lyrics of unnoticed love and affection.

“no body, no crime” certainly spins a haunting story worth telling. Swift returns to her country roots with subtle nods to Carrie Underwood and Miranda Lambert. We won’t spoil it for you, but it’s a righteous crime-drama of a cautionary tale, all within the span of three minutes and 36 seconds.

Swift continues the album with a somber yet lighthearted piece—”happiness” tells about missing the contentedness of a relationship that no longer exists. It expresses a hopeful tone for the future and moving past the heartbreak.

“dorothea,” whom Swift fondly refers to as “one of the ladies of ‘folklore’ and ‘evermore” in an Instagram post, tells of a girl who left her hometown to chase her big city dreams. With a cheerful tone, Swift writes from an alternate perspective yet again: “dorothea” is told through the eyes of an unnamed young adult watching a beloved friend or lover chase fame.

Despite Swift’s history of songwriting with Aaron Dessener, “coney island” featuring his band, The National, marked a long overdue collaboration. The dark, somber tone describes a dysfunctional relationship and everything that went wrong in it.

Keeping up with the theme of “evermore,” the folksy tune of “ivy” tells of an irresistible forbidden romance in a whimsical, fairytale-esque style. It uses the metaphor of the ivy plant to symbolize the growing love.

As one of the more chill songs on the album, “cowboy like me” keeps relatively similar dynamics throughout the song, which is unusual for Swift. “cowboy like me” allows Swift the space to reminisce on her early country music days.

Perhaps the song that most clearly screams fairytale, “long story short” is Swift reclaiming her narrative, explaining that she is fed up with her people-pleasing habits and will no longer continue them. However, she incorporates the themes of “evermore” by using classic storytelling lines such as “if the shoe fits” and “right down the rabbit hole” to create catchy, memorable lyrics.

Also considered one of the ladies of “folklore” and “evermore” is Swift’s very own grandmother, “marjorie.” Since her grandmother’s passing, Swift claims that she still visits her in her dreams, ones that she fondly looks forward to. She speaks of lessons that her grandmother may have taught her as a young child, like “never be so kind, you forget to be clever.” Fittingly, this is the 13th song on the album just as “epiphany” is for “folklore,” which speaks of her grandfather’s wartime service.

In “closure,” Swift emphasizes the importance of letting go of a past relationship/friendship. The lines “yes I got your letter, yes I’m doing better” is her saying that she’s doing completely fine without toxic people in her life.

Swift aptly concludes the album with its title track, “evermore.” The collaboration with Bon Iver connects “evermore” to its sister album, “folklore.” Though their unforgettable ballad “exile” on “folklore” is hard to compete with, Swift and Bon Iver were able to execute yet another intensely heartbreaking track with “evermore.”

Swift truly displays her incomparable songwriting skills with “evermore,” with each album consecutively demonstrating stronger lyrics. Swiftie or not, “evermore”’s skillful storytelling is worth a listen.