Soundtrack your life for fall with these five atmospheric albums 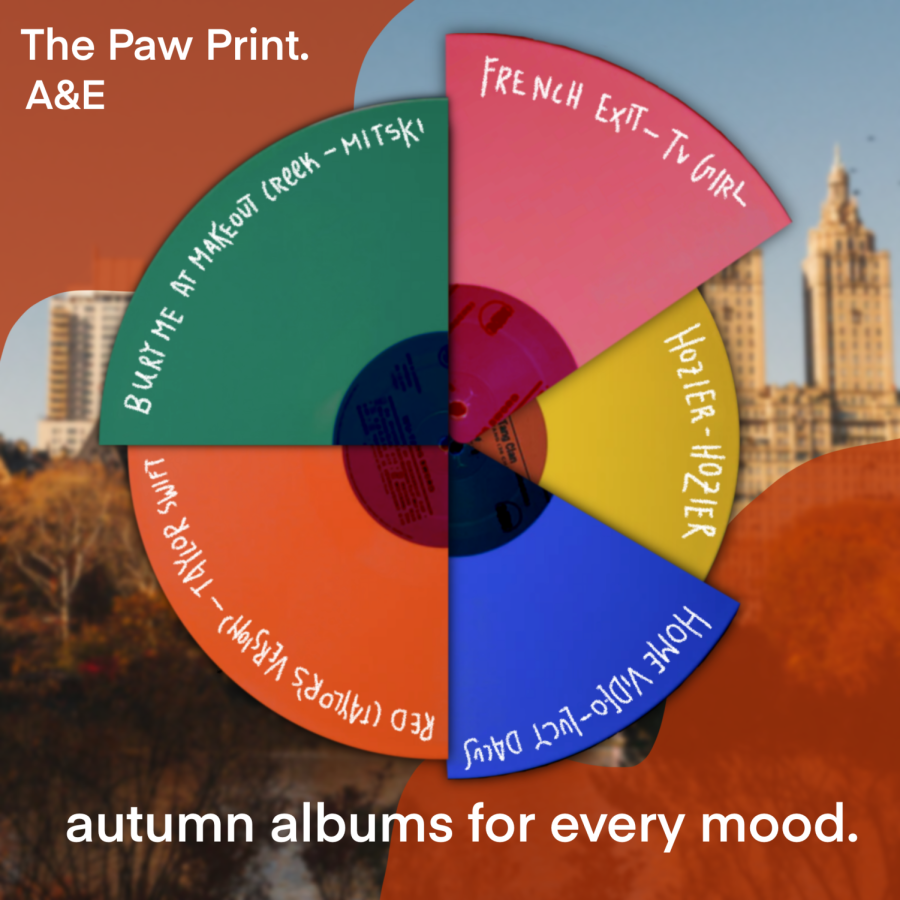 As the weather turns chilly, it is customary for us to become more introspective and emotional beneath layers of plaids and puffers. From the haunting melodies of Mitski’s “Bury Me at Makeout Creek” to the rousing folk-pop of Hozier’s debut album, The Paw Print explores the sounds of fall—the crunch of autumn leaves beneath your boots, the mournful twang of your heartstrings after a breakup and everything in between.

For cozying up with a journal and tea:

On her third studio album, indie singer-songwriter Lucy Dacus revisits the most transformative and nostalgic experiences from her youthhood. With a knack for voicing succinctly piercing anecdotes set to plaintive acoustic melodies, Dacus draws listeners into a hazy memoryscape of the suburbs where she grew up.

As Dacus reflects on her days skipping school to attend a matinee with a high school beau, or sharing secrets in a cabin at Vacation Bible School, she strays away from both condemnation and romanticization of her memories. Instead, “Home Video” is Dacus’ exploration of one central question: How did I become who I am today?

Fearlessly, she invites audiences to venture through the gardens, lonely diners and the eerie caverns of introspection—emerging with a grounded sense of self-appreciation that radiates hope.

For romanticizing life during a long car drive:

With thirty heartfelt ballads and bops, Taylor Swift returns to her “sad girl autumn” era with the release of “Red (Taylor’s Version)” on Nov. 12. Focusing on staying true to her country roots with a pop twist, each song alludes to falling leaves, chilly breezes and warm colors (hence the title “Red”). It is guaranteed to put listeners in the cozy mood as the weather gets colder and leaves change hue.

Swift manages to capture the emotions and surroundings of the season to create the soundtrack of autumn. For many, fall is either a time of melancholy or joy. From emotional tracks like “All Too Well” (bonus points for the 10 minute version!) to concert-esque tunes like “We are Never Ever Getting Back Together,” “Red” has the songs for every kind of listener, upset or upbeat.

For hopelessly falling for someone:

In 2014, Hozier debuted his self-titled album with 15 soul-inspired, indie folk tracks. The Irish musician reminisces on his first relationship, processing what it meant to be loved and in love.

With his somber plea of “Take Me to Church” to his joyous high in “Jackie and Wilson,” Hozier is not afraid to expose the euphoria and misery that accompanies a relationship.

Despite the intense contrast of these emotions, the album’s flow is seamless with the portrayal of his unapologetic vulnerability. Hozier’s constant use of religious and autumnal imagery allows listeners to transport themselves into the love stories he has created.

Whether you are simply admiring or absolutely smitten, this album will have you falling faster than autumn leaves.

For pretending to be the main character in a classic 80s rom-com:

Effortlessly incorporating dramatic dialogue and carefree scat with the lead singer’s distinctly LA-indie voice, TV Girl epitomizes pining and infatuation on “French Exit.” At heart, the album’s tongue-in-cheek, casually cruel lyrics seem to satirize the world they sample from, yet the endearing highs of the album’s love ditties draw listeners back in every time.

Atmospheric and enchanting, “French Exit” is the Timothee Chalamet of albums: the 2014 release’s youthful timelessness and elegance will no doubt continue to captivate old and new audiences for years to come.

For when the season changes and snow begins to fall instead:

“Bury Me At Makeout Creek,” Mitski

Japanese-American singer Mitski explores the complexities of growing up with her third album, “Bury Me At Makeout Creek.” Although it was released 7 years ago, her indie rock and punk style ballads resonate with today’s generation. They are redolent odes to Mitski’s youth as she undergoes the stages of grief. She ends with “Last Words of a Shooting Star,” her ultimate defeat yet acceptance of having to move forward.

With the stress of college applications and completing senior year bucket lists, the class of 2022 may have a hard time accepting that the end of our adolescence is almost here.

“Bury Me at Makeout Creek” offers seniors, and all ages, a chance for reflection and to just let out a good cry before it is all over.

Speaking from experience, there’s no better way to celebrate the cool weather than to slip on your headphones and slow down the pace to one of these five great albums.