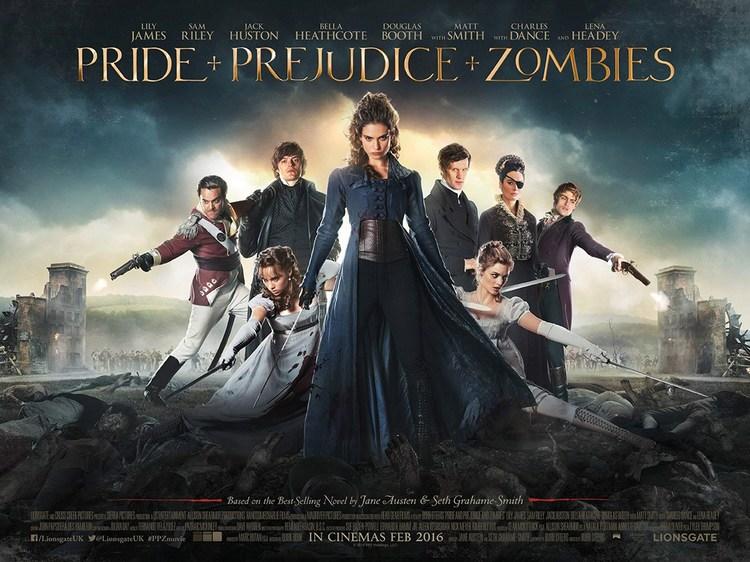 Pride and Prejudice and Zombies

It’s official. One of the most revered classics of all time has been corrupted by the twisted mind of modern-day society. Jane Austen is probably banging her head against her coffin in shame at this very moment.

If you haven’t read the book or seen the movie, I’ll give you a quick synopsis of the Walking Dead version of Pride and Prejudice. During the 19th-century, a young woman named Elizabeth Bennet has been trained to be an expert at close combat and handling weapons. She becomes acquainted with an infamous zombie killer known as Mr. Darcy, and they set off together in order to vanquish the undead together.

There were so many things wrong with this movie that I’m not exactly sure where to start. Let’s talk about one of the most important parts of any film: the cast. One redeeming aspect of the movie was the fact that Lily James played the leading role. If it weren’t for her presence, I probably wouldn’t have even gone to see the movie. She played the part of Elizabeth so well, despite how ridiculous everything else was. She completely owned the role and was able to bring many of her character’s most important qualities to life. It was easy to tell how dedicated she was through her perfect portrayal of the love/hate relationship that Elizabeth shared with Mr. Darcy. The rest of the cast also did a quality job of accurately portraying Jane Austen’s characters; however, there was no room for any character development due to the lack of screen time.

Unfortunately, one particular member of the cast was not at all meant for the role that he was given–Sam Riley, otherwise known as Mr.Darcy. I wasn’t too bothered by his looks, and even his acting was “perfectly tolerable,” but his voice drove me up the wall. I never thought that how an actor’s voice sounds really mattered, but after having to sit through nearly two hours of listening to his voice, I’ve realized just how big of an impact it can have on the movie as a whole. He sounded like a 50 year-old man with a smoking problem trapped inside the body of a twenty year-old. I cringed every time he spoke, and he completely ruined just about every scene that he was in, which accounts for more than half of the movie. This was a major downside, and I’m not really sure what the producers were thinking when they casted him.

Anyways, next comes the plot. Thankfully, all of the major events in the original book were included, even if they were a little twisted to better accommodate zombies. In fact, I have to say that I’m pretty impressed with how they made the whole thing tie together while still staying true what Jane Austen originally wrote. However, there were still many problems with the storyline. Due to the sudden addition of zombies, the original plot had to be changed and rushed, which made for choppy scenes and hasty dialogue. Many of the scenes were sort of just strung together without any transition, and the abruptness of it all gave me a headache. It’s blatantly obvious that the director was just trying to move things along, rather than make each scene flow to the next like its predecessor.

As if that wasn’t bad enough, there were also so many just completely unnecessary scenes. For example, on more than one occasion we were forced to just sit and watch Mr.Darcy as he chopped up a bunch of trees with his sword. These moments did nothing to add to the plot, and were extremely boring to watch. Although, if I had to point out one redeeming quality about the plot as a whole, it would be that it was so ridiculous that I actually got a good laugh out of how they just ran with the concept of zombies in the Victorian era. It was refreshing not to watch a dystopian movie about a corrupt government and a female heroine for once.

Finally, the visual effects. This is the part where I can do nothing but praise the movie. The costumes. The make-up. The set. All were given an enormous amount of detail, and made everything so much more interesting to look at. Each dress was perfectly fit for each of the Bennet girls. The face of every zombie was made to look so realistic and gory. (I was relieved that they didn’t just throw fake blood on people’s faces and ruffle up their hair.) Every ballroom was elegantly lighted and decorated. The houses that they visited were all designed to fit the time period. Everything was just so well executed that it almost made up for what they other aspects of the movie lacked.

Even though the movie was a pretty big let-down, I did find myself somewhat enjoying it. There was enough humor and action to get me all the way to the credits but I definitely would not pay to see it again. I recommend watching this only if you’re searching for something totally different from the current movies out there. However, if you’re looking for a good, wholesome movie that’s worth your time, I suggest that you stick to the Kiera Knightley version, or look elsewhere.  (2 out of 5 paws)