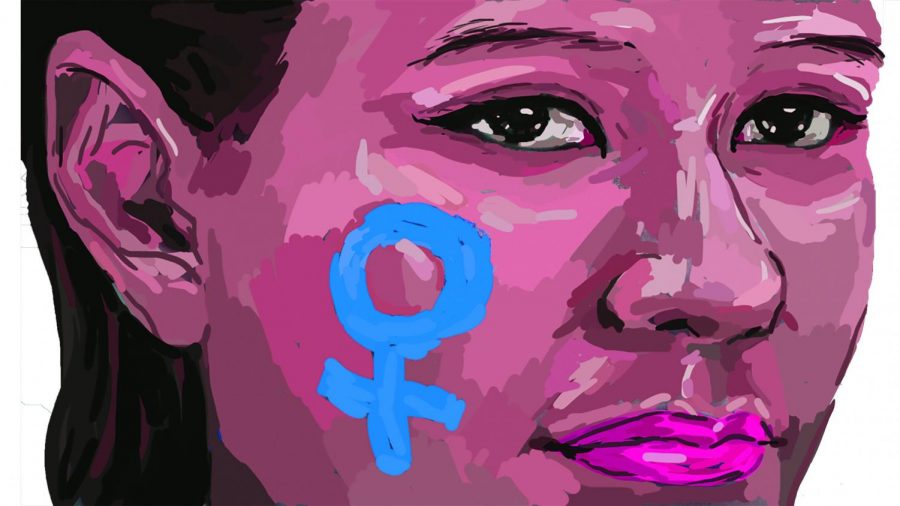 We the Females (Stand)

I am a South Korean girl — confident of the monolids that paint the outsides of my eyes, proud to hold the basket filled with traditions interwoven within centuries of bloodlines.

This was not always the case.

Once, the mention of my race brought my younger self to a gagging disgust and snide remarks. Korea was what I cursed out when my achievements and efforts were meaningless compared to its elite students, was what I degraded and blamed when I placed my pudgy-looking face next to clear-cut images of Western beauty standards. Inside me set ablaze a flame of detestable shame; I was sheepish of my homeland, humiliated at the sight of my country’s open arms, ignorant of the depth and value my culture held as well as deserved to be recognized for.

But what I had despised the most throughout my years, livid of being Korean, was having to be a Korean female.

From Uncle’s comment of “For a girl, you really do not dress like one” to Grandmother’s head shaking in disappointment when scolding me about not having aegyo (a cute display of affection), I felt only the toppling of my pent-up anger built upon too many clenched fists.

“Maybe ‘feminism’ exists in America or whatever, but we do not have anything of that sort in Korea,” Grandma had said loudly, wanting me to take in her words.

And I did; I believed her and all my rotten thoughts underneath, foolishly imagining Korea as a world of women weak, demure, and nothing more than just limp bodies against the wall or the pale wrists to grab when the lead male needed to prove he was the dominant “hero.” I watched Korean variety shows where women in their early 20s danced with middle-aged male television hosts watching on, hooting in delight. I scoffed as my mother sat on the couch with a laptop balanced on her knees, devouring Korean drama series where forced kisses were coated with romantic, light-hearted melodies. I listened to Korean girl-groups’ songs — “Gee” by Girls’ Generation,  “Loving U” by Sistar, “No No No” by Apink — then grimaced with bitter contempt.

“Autotune, autotune, autotune: Can they not sing about anything else other than wanting to fall in love? These girls aren’t real artists. They are only famous for being pretty, but even that’s probably from plastic surgery,” I would mutter, my nose haughtily held up high.

If I could have set free the limitations of my perceptions, maybe I would have noticed what I had not yet acknowledged.”

In my mind, I had thought that the place I lived in — America — was a country of such progress and development while South Korea’s push towards change would never come like a nation drowning in quicksand. Somehow, I had thought I was better than my fellow Korean brothers and sisters, as though I was more educated on current events, more modern, more politically and socially active as though I was a real feminist and they were not.

Oh, but how very wrong I was. Feminism was not about slut-shaming and tearing women apart when we needed each other the most. Feminism was about equality between female and male: equality in the workforce, equality at home, equality regardless of gender. And at that moment, my past self was not a feminist but somebody extremely rude, intolerable and unaware of her surroundings. My mind was stuck in the past while I existed in the present, the now, and it needed to wake up. If I could have set free the limitations of my perceptions, maybe I would have noticed what I had not yet acknowledged.

I had not yet known that Korean girl groups — who danced day and night in a tight practice room — too had approached songs of females confidently pursuing their sexuality, such as Brown Eyed Girls’ “Recipe” and 2Ne1’s “I am the Best.”

I had not noticed the rise of strong female protagonists in Korean dramas like “Strong Woman Kim Bok Joo,” as they ventured through their troubles with the help of their friends and supportive love interests.

I had been blind to the 2016 murder at Gangnam Station, where a 34-year-old man surnamed Kim who “was waiting for nearly an hour in a unisex bathroom near exit 10” let six men pass by but stabbed the first woman walking in with a 32.5 centimeter-long sushi knife.

I was deaf to Kim’s claims of killing her because he had “hated women” for ignoring him throughout his life, and I was oblivious of the court’s order, which stated this was not a hate crime against women.

I ignored the women who united together at the subway exit after this incident for the victim by sticking Post-its with uplifting messages on the station’s walls, chanting their fury out in the sidewalk, and holding discussions about misogyny.

No woman will be left behind on this ongoing path towards equality.”

I walked past the abuse happening in music labels, skipped over the fact that some people had surgeries to feel comfortable in their own skin, cared less of honest, kind personalities and was on the edge for more exciting news to come.

How could I expect change for women when it was I who was an obstacle, a mismatched piece of the tracks? How could I call myself a feminist as I tried to place myself in a higher standard than other girls, spewing insults and seeing red? How many of us viewed and diminished a foreign country into a generalization, only paying attention to its happenings when they impacted us directly?

Nowadays, many of us shut ourselves into a madness we can only say is ours; we thrive on each other’s misery, and we abide by the rules of not our own but of our intellectuals. Our way of life should pertain to the individual, but I fear that has gone astray; hatred has brewed within the bodies of humanity, and it has poisoned men’s spirits. Our knowledge has made us weary, our voices tattered and worn out, our curiosity ashamed and belittled.

However, I do not lose hope, because no matter how tempting, we cannot succumb towards this desolation invisible to the world, lunging and ripping each other apart like vicious dogs trapped in a metal cage, for it is only women who can truly lift up women. To understand and to be understood: These feelings are most comforting to a girl at harrowing times, marking a reassurance deep within the soul and building a trust once broken.

We the Females of this world must do the same internationally — understand and unite in this universal fight. If we could meet at Earth’s ends and touch at the tip of our fingers, communicating through our emotions rather than words, perhaps despite our differences we could strengthen as one over our fresh wounds and old scars.

Each and every woman on this planet has a story to tell, and we must bring light to all of them, because no woman will be left behind on this ongoing path towards equality.

Day by day, I break free of confinement and take in the unknown inch by inch, learning from all the brave women gone unnoticed that to be a Korean girl is a great honor. Standing by their side, I am in constant awe of the courage and determination, the flames burning in their stares, for although we may forgive, we do not forget. To rouse the unmoved and to acknowledge the secluded, to care for the neglected and to understand the mistaken, to fight for our rights and sing in the abyss that be our lives — We will be heard, and together we shall rise.