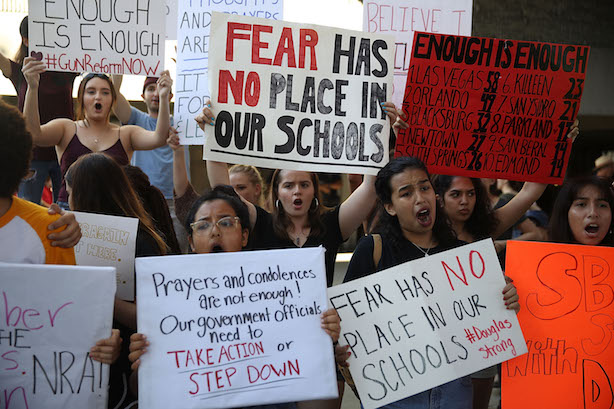 Activism is not defined by age or race, but rather by one’s courage to stand up against pressing injustices and their tenacity to take a movement to new heights.

In light of the horrific school shooting that occured in Parkland, Florida on February 14, many students from the devastated Stoneman Douglas High School have taken the tragedy as an opportunity to fight for stricter gun control. These teenage activists have risen from an extremely calamitous event and have turned their fear into fury, unleashing it on the United States government about lawmakers’ unwillingness to protect the students of America. Although the students have presented educated, mature and valid arguments, they still face scrutiny from older generations because of their age. These claims make a mockery of the determined youth and their avid attempts at activism by deciding that their age and supposed immaturity constitute as flaws that make them unworthy of being involved in their country’s government. This argument is a timeless attempt to undermine teenagers in their actions toward creating a better future for themselves and their country.

As students, we are constantly instructed to “be the change we wish to see in the world,” a phrase repetitive in usage but all too true in its meaning. I have seen countless posters in pretty classrooms preaching that we must speak up, use our voices and be heard; why must we only adhere to these commands when it is convenient for adults? It is imperative that, as uncomfortable as it may be, young people get involved in issues that they believe in. With Common Core and other educational monotony, adults should be praising youth in their attempts to stand up for something other than a bad test score. I am constantly hearing older generations speak of young people as if they are technological robots who do nothing but text and tweet and twiddle their thumbs, but when teens try to make a difference, they are scrutinized for doing anything but what we are expected to do.

Many even chalk up teenagers’ inability to bring about change to the assumption of immaturity. But, with a President who calls people names behind a phone screen, maturity is clearly not a required trait for leadership. Knowledge can exist with the presence of immaturity. Immaturity can exist with the presence of old age. Although it is true that teens’ brains are not fully developed, this does not make them any less fit for revolution. It is not difficult to establish right from wrong — this is a skill we are taught since preschool. Students are consistently chastised for applying their learned morals to something that actually makes a difference. I have seen petty politicians and childish leaders, all of which had more support than the strong groups of young people working to better their future and the people who will be a part of it.

Prejudice runs rampant in America. Similar to false ideas that women are unable to live up to the   standards of men or the concept that black people are inferior to white people, many have constructed the opinion that children are not capable of being aware of what is going on in the world around them. Political awareness is not a present wrapped neatly in an American flag and gifted to young adults on their 18th birthday. Rather, it is a set of opinions we should help young people foster throughout their life. Adults have generalized youth and labeled us as uninformed and undeserving of being listened to. Our nation is in desperate need of a bright future and young people are that future. The old white men in office who bash us for speaking out, for listening when they tell us to stand up for what we believe in, cannot tell me I am too young to care about the country I will one day inherit. One day, much sooner than it seems, this nation will count on us to be the change they wish to see, so what is so wrong with getting a head start on that change? Activism does not come with age, it comes with ideas, courage and the determination to make a difference.

Revolution is not an act of dramatized defiance or rebellious youth, but rather an awakening of eager children working towards something bigger than themselves. So what is the real reason adults mock and refuse the rampant activism spread by teens around the country? Maybe they are afraid. Maybe they feel threatened. Maybe they truly believe we are not capable. But no matter what, the youth of America must stand together in unity for their rights and safeties. Protest cannot only occur when it is convenient for others. We have been told since elementary school to never sit back and watch someone get hurt, and we will not change our ways now. Let them cower behind tweets and taunts. Let them laugh and look away. But we, a generation of willing warriors eager for a fight, will never stop speaking out.