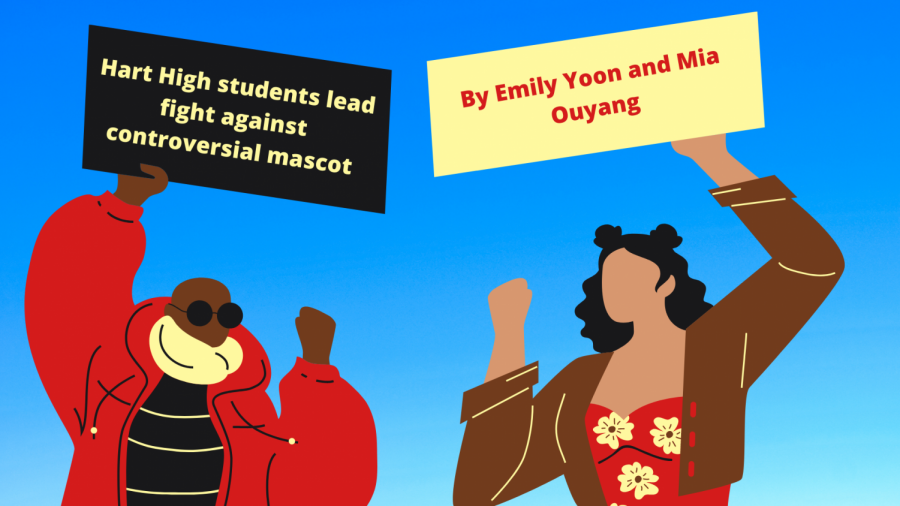 With time progressing further from this country’s controversial–if not darkly cruel–past, many have found it easier to re-examine the history of the United States without the rose-colored glasses of foggy patriotism.

One of these includes the brutal mistreatment of Native Americans, both as America was colonized and by the future presidents, from Columbus’s massacres to President Jackson’s infamous Trail of Tears. One would think these times are far behind us; however, it seems they’re much closer than we’d like to believe.

With the Black Lives Matter movement once again gaining momentum, young people across the globe have taken to their own communities to combat racism, including our very own Santa Clarita residents. As local teenagers take to the streets in protest, attention turns to Hart High School.

Hart High School’s controversial mascot is the Indian, which is referenced at sporting events and rallies. The student body is known as “The Tribe,” along with their “Tribe Leader,” who, when crowned with the title, is donned with face paint and a feather headdress.

“The mascot is derogatory to Indigenous people in general because it stereotypes our culture into a caricature,” says Izzy Medbery, an SCV teen of Native descent who attended Hart her junior year. “The ‘Indian’ is not only the incorrect term for Native American individuals, but also reduces us to a ridiculous Caucasian vision of a savage, a cartoon being, not a people.”

It becomes apparent upon further investigation that the problem with the Hart mascot is not necessarily the mascot itself, but the image it portrays of Native Americans. An entire culture is simplified and distorted, a culture that permeates American history yet is still to this day fighting to be heard.

“I’m sure you would feel extremely uncomfortable if you saw students throwing a sombrero through a crowd or shaking maracas at football games, painting their mascot stereotypically,” says Julia Estrada, a 2020 Hart alumnus and also another leader of the campaign.

When asked about the overall student consensus on the mascot, Medbery responds,

“The student body for the most part does not seem to care, though some have voiced their disagreements with the mascot. I feel offended by white students sporting headdresses like sports caps at athletic events, and [others] take offense as well,” she states. “Individuals of color are not your cartoon, indigenous peoples are not your high school mascot, and we are not to be taken as a joke.”

Despite many students’ loud outcry for change, many students still rally behind the “Indian” mascot, and they seem loath to any modifications.

“Well, in my friend group, we all agree that this is a necessary change. However, on multiple Snapchat stories, I’ve seen fellow students talk about how ‘if they change the mascot, I’m going to [blank] school,” Hart sophomore Bella Shean shared in an interview.

Another Hart student discussed his positive interpretation of the mascot. “I think of it mainly as a homage. It’s not like we are mocking the Native American culture by putting on headdresses and dancing around like idiots trying to make fun of them,” shared senior Kekoa Huihui-Andrew. “As far as us calling ourselves ‘tribe,’ I believe it has more to do with the strength of the body than a derogatory term.”

Huihui-Andrew went on to say that he would not be opposed to changing the mascot.

Despite backlash, many students in the Hart District have rallied behind the cause to change the mascot and signed an online petition to retire it. The petition reached 17,557 signatures, exceeding its goal of 10,000.

Grace Gooneratne is a 2020 Hart alumnus and leader of the movement to change the mascot. Gooneratne spoke about the cause at a Hart District board meeting held on June 6, but stresses that discussion is not enough: “While [the school board members] are willing to open a conversation, they’ve been somewhat dismissive of the idea that Hart’s mascot is in any way offensive or detrimental to Native communities.”

In recent months, board members, student activists, and even the local Fernandeno band of Tataviam Indians have been engaged in conversations relating to the mascot. A statement from the Tataviam tribal senate regarding the removal of race-based mascots reads: “It is demeaning to depict us–the first People of northern Los Angeles County–as mascots because it does not honor our history, ancestors, or culture.”

As of August 10, leaders of the movement and Hart District school board members have reached a compromise. Hart students will not be allowed to use a “teepee,” make stereotypical “Indian” chants or wear the headdress at school events.

“I think this was a decision long overdue,” Medbery told The Paw Print in a follow-up interview. “It’s a step in the right direction for sure, but the end result needs to be the changing of the mascot. I honestly don’t know why this decision wasn’t made earlier.”

With mounting support behind the changing of the mascot, many may wonder whether the Hart district will finally change it, or whether the situation will remain a ticking time bomb.