Alana Pelaez, president of GSA, alongside her girlfriend.

It’s another day at West Ranch and you walk through the gates, but you don’t stop until you meet that familiar smile or place that lets you release that breath you didn’t know you were holding. It’s your safe place.

For many students worldwide who are apart of the LGBTQ+ community, it’s hard to find a safe place, whether it feels as though they have to keep a part of themselves secret or they are openly out and face judgement. The West Ranch Gender Sexuality Association, more commonly referred to as GSA, strives to provide a source of comfort for all, as well as education on important topics related to the LGBTQ+ community.

Our campus’ GSA club is not new, but its name has taken on a new meaning since its founding. While it used to stand for Gay-Straight Alliance, the purpose of the name change was to make the club more inclusive to those who identify with a different gender or sexual orientation previously left out of the acronym. Albeit, the name is not the only change this year’s leadership has in mind for the direction of GSA.

“There wasn’t a whole lot of meeting structure last year; it was just a good environment for LGBTQ+ and non-LGBTQ+ to come in and have a safe place, and I’ve definitely kept the same outline of that structure. But now we have more defined meetings where we say, ‘Hey these are the topics we’re going to cover, let’s talk about it and let’s educate everyone.’ We’ve had a really good turnout because of that, so something’s working,” explained Club President, Alana Pelaez.

The color of Alana’s hair and eyeshadow is always changing, but what’s constant is her cheerful disposition and the warmth that she radiates.

“I always say to someone ‘If your parents don’t support you, come sit next to me at lunch. I’ll be here for you. I’ll be your ally. I can be your support.’ It’s amazing for the club to have certain people to stand up and say ‘I need someone in my life,’ so I say, ‘I’m right here, here’s my number.’”

GSA’s mission statement is “to protect and educate everyone,” whether you are part of the LGBTQ+ community or not. Pelaez aims to end the stigma that prevents non-LGBTQ+ members from attending meetings, however, she understands that taking that first step may seem daunting at first.

“I know it can be a lot, but you can also walk in and be like ‘Hi, I’m an ally’ and that’s fully okay. You can come in with one mindset and leave with another. I want it to be a safe environment where people can just walk in and feel welcome instantly,” said Pelaez.

To raise awareness for GSA, Pelaez hopes to hold fundraisers for the club including bake sales and a benefit concert. She also plans to host a swap meet where people can come in and make items or donate their old belongings. And to benefit the LGBTQ+ population outside of West Ranch, Pelaez intends to donate a portion of these earnings to different organizations such as the Trevor Project or to anywhere that would benefit the community in its entirety.

As explained by Pelaez, GSA’s end goal for this year is to host a drag show to celebrate and show support for the LGBTQ+ community. Holding fundraisers throughout the year and picking venues are on her agenda to ultimately carry out this empowering event.

“Everyone could come out, have a good time, and wear a bunch of wigs. That’s our end goal: just a big celebration where people can come out and just appreciate the LGBTQ+ for what it is, all the history behind it and all the amazing things it has to offer.”

Together with Vice President Isabella Kludjian, Secretary Ayden McKenzie and Treasurer Quynn Lubs, Pelaez and other members of GSA have taken strides to help students feel comfortable with their sexuality, even if their loved ones don’t see common ground.

“I sit them down and say ‘Hey, these are the steps you can take talking to your parents.’ And just showing them and having the conversation of ‘This is who I am; you have to deal with this now.’ In the LGBTQ+ community specifically, you have your chosen family which is your friends who can support you,’” explained Pelaez.

One moment that stands out to Pelaez during her time as president of GSA is a club meeting that covered how to be an ally or friend to someone in the community. Despite their religious backgrounds and parents’ beliefs, some students revealed to GSA members that it would not stop them from supporting the LGBTQ+ and being a good friend. 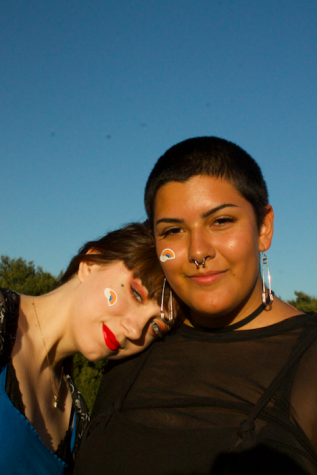 “It was such a good moment to see. The community had expanded much farther than I thought it actually would, so it was real heartwarming,” said Pelaez.

Through their efforts to protect and educate students on the LGBTQ+ community, GSA has lent a helping hand to those struggling with their identities. GSA’s influence on West Ranch and beyond is sure to be impactful for all students in the future, whether they are part of the community or not.

Recent events have successfully opened the conversation on gender and sexual orientation and our GSA club is a part of it. Even a small change on our campus, is progress for the entire LGBTQ+ community. You can join their meetings in room 540 on Wednesdays at lunch.