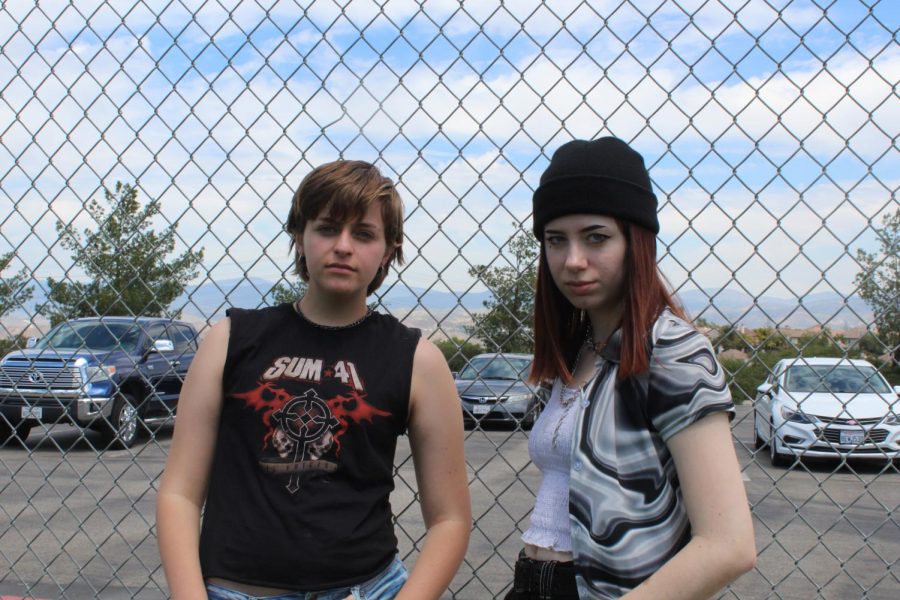 The alternative scene: A label given to people who look a certain way and like certain things, and, therefore, the rest of the world gives them dirty looks, shielding the eyes of children and walking the other way.

A scary thought, isn’t it?

Today, the punk subculture exists in nearly the same way as it did when it began. Punks are classified by their out-of-the-ordinary appearances — mostly their outfits. Layers of fishnet, denim and leather as well as spikes (whether that’s on jewelry or in hair), chains and rings are just some of the various aspects of punk fashion, and it has nearly always been this way.

The term “alternative” was coined in the 1980s when in reference to underground punk bands — like Black Flag and The Clash — who didn’t belong in the mainstream music of the time. Since then, people belonging to the alternative scene — those who find their happy place in concerts and who dress differently than the trends — have strayed away from cultural and social norms.

This scene (or lifestyle, as some like to say) has existed since the early 1970s. Punk subculture originated in England, following the Skinhead subculture. The ideologies and history of the subculture are shown in the study, “A Detailed Journey into the Punk Subculture: Punk Outreach in Public Libraries.”

Punks were known for their anti-establishment, anti-racist and anti-sexist belief systems. The culture was adopted in the U.S.; however, Americans were mostly attracted to punk for its symbols and look — not its ideals.

Within the punk subculture, there exists a number of factors that are unique to the movement. Punk ideals include rejection of status quo, skepticism of religion, anarchy, freedom of the people and destruction of tradition. Punks focus on challenging the beliefs of parent cultures in order to uncover a more authentic truth that exists beyond society’s constraints. These ideals are unique to the subculture, and are still believed by some today, although not everyone who defines themself as “punk” believes every single one of the ideologies (which can be seen in nearly every culture or subculture).

Since the early 1970s, many people believed the ideals of the punk subculture because more and more “misfit” teenagers wanted an escape from the boredom and constraints of society. The ideologies were encouraged by high unemployment rates, racial discrimination and social turbulence that existed worldwide during this time. The need for change fueled the fire that existed within early punks, and, eventually, the shock-factor of loud music and boisterous behavior developed, with the thought that gaining attention would allow for faster progress.

These ideals are put into action in hundreds of countries across the world today. In 2018, military rule in Thailand had been controlling the country for four years. In protest, a punk show was held in which hundreds of people involved with the pro-democracy movement attended — even older women in their 60s who had nearly no idea what the punk scene even was. The concert was held in order to protest the militant government of Thailand, but it also served as a memorial for the student-lead protests from 1973 where troops opened fire and killed at least 77 protestors. The five-word slogan, “It’s been four years, mother****er!” enabled the protesters to go viral online.

The punk subculture’s strong focus on anti-establishment views and members’ abilities to voice their opinions without worrying about backlash leads to change occurring within individual countries as well as the world. From protests to fundraisers to awareness raised through music, change can often sprout from the punk subculture.

Today, the scene can most clearly be seen in teenagers — those who aren’t afraid to dress and act a certain way, knowing they will face criticism from nearly everyone around them. Straying from norms always comes with the possibility of harsh judgments from those who embrace society’s constructs. Punks scare people — not because of how they look, but because of their ideals. People are afraid of change, and the punk ideology fuels this change.

Since the 1970s, despising adults was a large part of the alternative scene in teenagers. This can be seen in plenty of songs and music videos internationally, including “Fight For Your Right” by Beastie Boys from 1986 and “Mom Stole My Darts” by The Chats from 2017. Lyrics that bash parents for trying to put a stop to the alternative scene — because of the older generations’ tendency to hold on to traditions and the punk tendency to stray away from these same traditions — have existed since the beginnings of the punk genre. This, in turn, leads to adults disliking teenagers that belong to the subculture.

Teenage rebellion is common amongst nearly all adolescents, but it is seen most prominently in alternative teens. Two common types of rebellion are against social conformity and adult authority. Rebellion is a huge reason that adults look down upon teenagers in general; specifically, teenagers who listen to punk rock bands and who refuse to conform.

Punk teenagers tend to dislike authority due to authority figures (like the government) trying to control their people. Punks want freedom for all people, and when this freedom is threatened, they speak up in the only way they know how: music. Lyrics that blatantly call attention to government wrongdoings have existed within the movement since the movement was contrived. This, in turn, lead to countless moments of censorship and bans, but, don’t worry, underground shows kept the music alive.

Fans of punk rock bands found a sort of salvation within the genre. Attending underground shows and playing punk rock CDs allowed teenagers to channel their rebellion into a subculture that was known for change. Listening to punk was a small way for individuals to make a contribution to a larger cause, to take down authority that controlled them and to force society into a progressive state.

The anti-establishment views of those involved in the punk movement are likely responsible for the dirty looks given by those in older generations. Songs about hating authority for its stifling of progressive ideology, like “American Idiot,” by Green Day and “Killing in the Name” by Rage Against the Machine, put the ideals of the punk movement into words that are sung by thousands. With more and more people believing in the anti-establishment, tradition-eliminating ideals of the punk movement, progression seems to be right around the corner. However, those who reside on the opposite side of the spectrum from the punks — believing that establishment and traditions are the glue that holds society together — may be offended by the loud and opinionated music that blatantly go against their beliefs.

Those who believe that the government wants the best for its people may regard these lyrics and beliefs as disrespectful. Punks have grown up being taught the same exact things about society, but, at a certain point, their realization of wrongdoings and their drive for change caused them to work to achieve that change through listening to or playing the powerful music that is the backbone of the punk subculture.

The dirty looks from some of those who disagree are coming from a place of assumption and judgement — anyone who looks as though they are a part of the punk movement must be disrespectful towards older generations. This belief is coming from the idea that punks are simply rebellious teenagers who just want to feel like they belong, not really caring about what they’re fighting for or against.

Adults have always had some sort of judgment towards the teenagers who went against the norm — when rock ‘n’ roll first originated, it was referred to as “The Devil’s music” by those in older generations. It was thought that listening to rock would cause juvenile delinquency and teenage rebellion. The fact is, music like rock and punk, that go against the norm, simply provide an outlet for people who want progression. The music doesn’t cause the drive for change; it provides a safe place for people who believe in that change.

On the West Ranch High School campus, one may notice a few students who fit the description of someone involved in the punk movement — going against the norm and not caring about what others think.

Senior Hannah Le Blanc describes her 90s grunge-esque style as “just wearing what I like. I don’t really try to hold my style to any labels. Whatever mood I’m in, I just pick what I feel like represents me and what I think is cool.”
Being involved in the punk subculture means more than just dressing the part. In the same interview, Le Blanc told The Paw Print, “I agree with some of the punk ideology, like freedom of expression and letting go of traditions; however, I think other people have the freedom to believe what they want as long as it doesn’t affect or harm other people because I’m not okay with that, and I will speak up against it.”

Another student at West Ranch, Emma Smithson, describes her style as “androgynous, playing with masculine and feminine clothing types, but always has an almost dirty or lazy look that is still color-coordinated.” When it comes to ideals, Smithson said, “I believe punk to be the purest example of [government] for the people and by the people. I have always promoted speaking out and showing the world a movement that wants you to be who you really are.”

Although their fashion differs slightly, both Le Blanc and Smithson have experienced ridicule for their appearances.

“I’m told that I look dirty kind of often, and my hair tends to be a topic of discussion with it being a messy unisex cut,” Smithson revealed.

Le Blanc shared her experiences with ridicule as well. She told The Paw Print, “I usually receive stares and occasionally rude comments, usually from older people, specifically men. I think I receive ridicule because especially older people hold the younger people to such a high standard, and when the youth doesn’t conform to what they want, it comes across as ‘disappointing.’ Living in SCV, which is such a small bubble, closes people’s minds to creativity and free expression.”

Those in older generations will always expect the youth to perform certain tasks at a certain level of excellence, whether that’s with school or with upholding traditional values. The problem with this is that some traditions as well as ways of thinking are not acceptable in today’s social environment. The punk ideology of destruction of tradition comes across as offensive to those who believe in traditions as a foundation for humanity. It is impossible for change to occur if old beliefs are held on to. Punks challenge what has always been known as “truth” in order to make progress.

Creativity and free expression are vital for change, and, in a place like SCV, they can be largely stifled. To dress the way you want is one thing, but to believe in ideals that are frowned upon by a majority of citizens is another. It can be difficult to hold on to beliefs if most of the people around you are telling you that you’re wrong. The punk subculture has created a way for young adults to feel that their voice is being heard; through listening to music and going to shows, it gets easier to believe in the ideologies that are frowned upon in a place like SCV.

The punk subculture has always been looked at as a safe place for those who are bored with society’s constraints and who feel that the world can do better. Though the loudness of the music as well as appearances may be off-putting to some, punks have learned that you need to be outrageous in order to be heard.

The movement encourages people to embrace themselves and to go against tradition, creating a confident and outspoken group of people who fight for what they believe in and dress however they want. 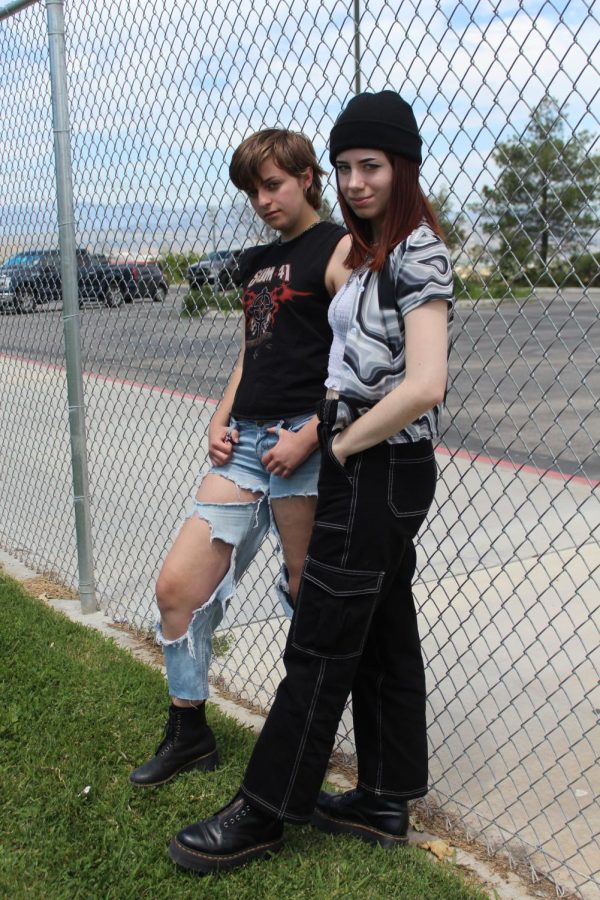