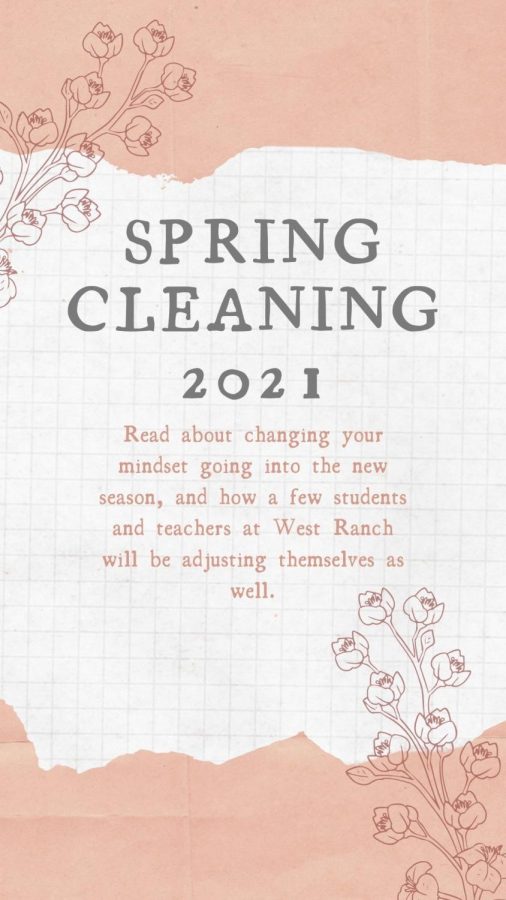 Spring cleaning is a popular household activity during the months of March, April, and May. Families get rid of items they no longer need to make space for new things, but this year, due to the pandemic, spring cleaning has also been a time for individuals to cleanse their attitudes and mindsets.

Mrs. McCormick, West Ranch’s Algebra 2 and Statistics teacher, expanded upon the idea of spring cleaning by saying, “If I don’t reflect [on my attitude], I can get stuck in one way of thinking and start to become self-centered.” Becoming aware of both your attitude and behavior is the first and most important step when changing your mindset.

According to Oxford Languages, attitude is defined as a settled way of thinking or feeling about someone or something, typically one that is reflected in a person’s behavior. Your attitude and mindset are what determine your character and your personality, and how you go about everyday life. As AP Biology teacher Mr. Smith explains: “If you’re always positive, then you’re helping yourself and you’re helping others. If you’re always a debbie downer then it’s not beneficial for you or others.”

With the new season and a fresh start approaching, The Paw Print reached out to a few West Ranch students and staff and asked them about habits or mindsets they would like to leave behind with the old season, as well as new attitudes they would like to gain during the upcoming one.

“I want to get rid of the mindset that I’m not smart enough or strong enough to get through things, because I know that I can with enough effort,” freshman Ryan Rhudy stated. Having never been through a normal year of high school, Rhudy explained that it has been hard to feel as though she can actually keep up with the West Ranch curriculum. However, she hopes that she can “gain the mindset that anything is possible, and that all you have to do is push yourself.”

Mr. Smith admitted that “The length of time has made it hard to keep a positive attitude for more than a year.” Due to such a long time in quarantine, many of us have sprouted bad habits and gained a different kind of normalcy; Mr. Smith noted that his has become “just wondering: ‘when is it going to end?’ and ‘will things ever get back to normal?’”

Mrs. McCormick voiced many of our quarantine adventures when she said, “Over quarantine, I became so used to being at home that I started avoiding leaving home altogether.” But she also went on to say, “I hope to maintain appreciation for my life as it is. Only when so many things I care about were taken away, did I realize how great my life truly was.”

And Mrs. McCormick makes a great point. With the world in shambles right now, all of us are extremely lucky to have the opportunity to learn both online and in-person, maintain contact with family and friends through online platforms, and receive vaccinations and news regarding the virus in a timely manner.

Spring is all about a sense of renewal and the opportunity to kick off a new season with a fresh start. With achievable goals in mind concerning both your mindset and attitude, spring is likely to bring with it a more positive and favorable environment.

We have all been through the ups and downs of this worldwide pandemic together, and there is no doubt that many of us would agree with Mr. Smith, who, when asked for any parting words for the old season, simply laughed and said: “Good riddance.”