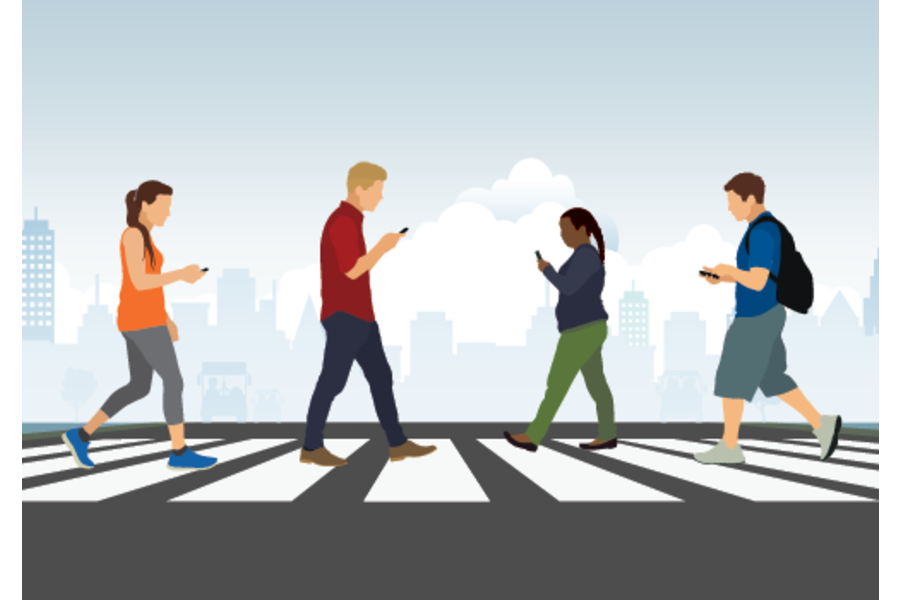 Reckless driving is a major problem throughout the whole world. On average, according to a study by the Association of Safe International Road Travel, more than 3,000 people die daily in car accidents. With increases in dangerous acts like drinking and driving and texting while driving, driving safely is more important than ever. The following story is part of a series detailing the various aspects of reckless driving.

You are walking alone, with your eyes glued to your phone—you just posted on Twitter, and likes, tweets, and followers are rolling in. Without being aware of your surroundings, you cross the street, still staring at your phone. The moment you decide to look up, you realize there was a car zooming right toward you, the driver not noticing you were there until there was no time to adjust, but it is too late. After a loud, hard crash, it wasn’t only you who got hurt, but also the driver. Most of the time, the driver is blamed for hitting another driver’s car, but in this case, it wasn’t the driver’s fault—it was partly yours, as a pedestrian.

Pedestrians can cause car crashes by simply walking while distracted. Whether it is because we are talking to friends or using electronics, we are putting ourselves and others in danger by not knowing what is going on around us. Teenagers put a lot of value in their phones and electronic devices.. Our lives revolve around social media, talking to friends and family, and all of the other phone features that we incorporate into our everyday lives. But, because of this, teenagers are the main culprit.

A 2013 study by Safe Kids Worldwide shows that pedestrian injuries among teenagers have been increasing, specifically by 25 percent in the last five years for the age group of 16 to 19, and that this age group is responsible for over half of all pedestrian deaths among children who are 19 years old or younger. It includes the observation of 14,930 high school students and 19,395 middle school students. Distraction was found more often in the high schoolers, as 20 percent of them were found crossing the street while being distracted by an electronic, whereas only 12 percent of middle schoolers were distracted. A majority of those kids were texting, using headphones, talking on a call, or playing games.

“Once, I had the right of way at a turn signal but a pedestrian jaywalked and put himself in danger. I had to stop my vehicle even though I was following the rules of traffic, which also put myself and the cars behind me in danger,” says junior Shreyas Hariharan.

The National Highway Traffic Safety Administration (NHTSA) says that the total rate of pedestrian deaths compared to overall road deaths is getting worse as the years go by. Also, in the United States in 2012, there were about 5,000 pedestrian fatalities and 76,000 traffic collision injuries. At that rate, someone would die every two hours or get injured every seven minutes.

Hariharan states, “I think some pedestrians may be careless when walking because they know that they have the ultimate right of way, however there are still traffic rules to be followed even while walking.”

The Huffington Post wrote about a 14 year old girl, here in southern California, who jaywalked in heavy traffic. In these dangerous conditions, she got hit by a car, but she and the other drivers did not stay at the scene or tell the police. Anthony Bertagna from the Santa Ana Police Department says, “Had both drivers stayed at the scene, this would have been the 14-year-old’s fault. She was responsible for what happened.” The girl was found with leg injuries and taken to the hospital.

Walkers tend to think that it is the driver’s responsibility to prevent them from getting hurt, but they’re wrong—they have as much power as the driver to keep things safe. Reckless driving is something everyone knows, but the idea of reckless walking is new to some of us. Reckless walking may even be more dangerous, considering everyone is capable of it, and it could be the end of your or someone else’s life. What is so important on your phone that it matters more than life?