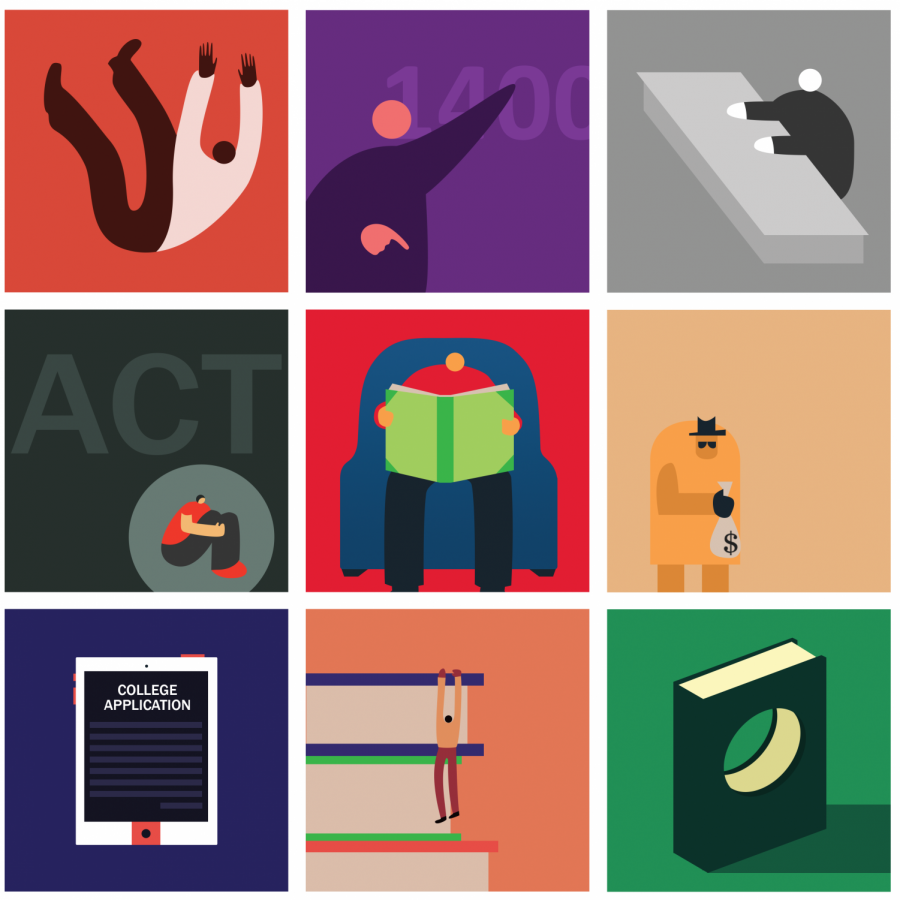 These three-lettered abbreviations dominate conversations between West Ranch students; they all represent numbers — quantifiable evidence of academic achievement. To a lot of us, they are tickets to college admissions, and we become obsessed. As a result, many have turned to test prep centers for help. These businesses are designed to facilitate growth and give students an extra edge on the competition. Claiming to improve test scores and analytical skills, the cure-all nature of these test prep centers brings up questions about their operation, legitimacy and ethics. They have prices upwards of several thousand dollars — could privileged students gain the upper hand by “buying their test scores?”

These mysterious beacons of branded backpacks and Barrons Books pose more questions than they answer. Do the test prep centers actually help? What is the student culture like at these places? Why do people pay so much money for these programs, and is the cost a concern when considering if the SAT and ACT are fair measures of intelligence?  So, we went to two of Santa Clarita’s well-known test prep centers — Elite Prep and Global Prep Academy (GPA) — to see what goes on behind closed doors.

All real student names have been replaced with pseudonyms for the sake of anonymity.

Hidden just off of the Old Road in between banks and insurance offices, there lies a small, quaint building. Upon entering, the first thing one would see is a pristine array of certificates, boasting SAT scores in the 99th percentile and names of Ivy League universities. Behind the flurry of paper and ink, inside glass-plated rooms, there is desk after desk of students silently working away on mock SAT exams.

This is Elite Prep Center.

These classes aren’t cheap. According to the official Elite website, programs such as the Elite Premium Package can cost up to $5,000. Bentham said that he believes he’s spent around $8,000 to $9,000 at Elite in his five years of attending it.

“I honestly have no idea why my parents spend this much money; it’s actually ridiculous,” said junior Jennifer Locke. “I feel like it’s this thing where they say, ‘Look, we invested this much into your college education, and if you screw it up, you just wasted our money.’”

Additionally, the costs of these test prep centers raise serious questions about the ethics of standardized testing in general. When services that range from weekly full-length practice tests to professional teachers who are “experts in their field” (as stated on Elite’s official website) are restricted to the few who can afford them, the socioeconomic divide between students seems to grow into a chasm.

However, price is not the only factor that seems to stand out at these test prep centers.

“See, Asian culture seems to be dominant there. You see Koreans and other Asians everywhere there,” said junior John Mills.

Whether it’s the hagwons of South Korea or the juku of Japan, Asia is infamous for its many “cram schools” — after-school programs designed to help students ace their college entrance exams. Because a single exam determines one’s university placement in many of these countries, after-school educational services have become a staple for many Asians.

In fact, a report by Michael Milken, financier and philanthropist, found that households in Asia spend upwards of 15 percent of their income for additional education services, more than seven times the 2 percent that American households spend. According to sociology professor Pyong Gap Min, the test prep centers of America are simply an extension of these “cram schools.”

However, while this drive for educational success may have well-meaning intentions, it can also splinter relationships within Asian-American families. According to a study by Pew Research Center, 39 percent of Asian-Americans say that Asian-American parents put too much pressure on their children to do well in school, while only 9 percent say the same about American parents.

“Our entire lives our parents put pressure on us, and they tell us that college is going to make or break our life,” said Locke.

For many Asian Americans, the importance of college as not only a path to higher-paying jobs but a site of personal development has been subverted by its symbolic value. To these students and their parents, college is no longer a means to an end, but a teleological end in and of itself.

“It’s like a game now. It’s not even about finding what you’re passionate about and what you want to do in life which is actually what matters — it’s about people wanting to show off where they went to college,” said Locke.

Perhaps the most unique feature of Elite, though, is its assignment of students into rooms. Programs such as Elite’s SAT boot camp divide students into rooms based on their scores during programs. While its intent is to put students in appropriate learning environments, it often has much more malicious effects.

“My least favorite part about Elite was definitely the segregation, I guess,” said Mills.  “I mean, automatically you would get called names like ‘untouchable’ if you got a lower score and got moved to a lower room.”

And while Elite most likely did not encourage this behavior, at the same time, student comments suggest that they didn’t try to actively stop it.

“The teachers there recognized this and actually ragged on the other classes,” said Bentham. “They contributed to the whole caste system.”

Yet despite these criticisms, all three students who were interviewed by The Paw Print said that not only did the center help them but that they would even send their own children to Elite. In that sense, the test prep center has become a symbol pervaded by ambivalence — an institution that students seem to criticize, fear and revile — yet one that they find themselves continually attracted to, even attached to.

Because in the modern-day game of the University — even if subjectivity is digitized into standardized test scores, acts of genuine charity are commodified into college app boosters and life as a young highschooler is reduced to pure utility — students (and parents) will do anything to gain the upper hand. 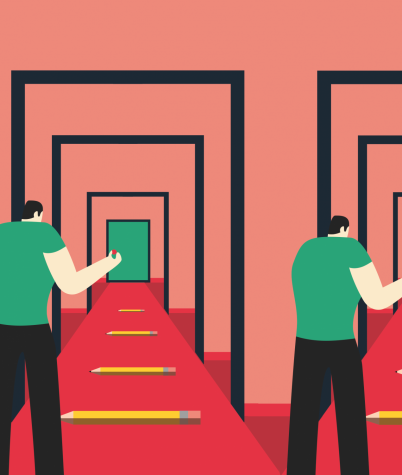 Plans for murals are outlined in sketch pencil on the walls. Students situated with laptops recline in piles of pillows in front of a decal of a famous Banksy painting. Awards and various eccentric trinkets line the shelves of this oppressively comfortable space. They live among throngs of books: Nietzsche, Fitzgerald, the Quran, and Introductory Chemistry — all lying comfortably in their comfortable little nooks.

This is Global Prep Academy — also known as GPA.

At the head of GPA is Davíd Najar. Often donning a Steve-Jobs-like black turtleneck tunic, he and his team of educators run the center.

He does not refer to GPA as a “test prep” or “tutoring” center, but instead thinks of the institution as reaching beyond helping students round out their scores, as more of a standalone place in which to supplement education.

“[GPA] is gonna be a project-based learning center that students are going to be able to create projects that will utilize their creativity, their critical thinking, their mental elasticity, and their people skills,” said Najar.

He even had plans to open a charter school but decided instead to open GPA as “an opportunity to be able to innovate in education while being outside of the system.”

The System. The cyclical management of education; the definition of students as grade-point-averages and test scores; the numbers game. The System.

GPA is familiar with this System; it knows what goes on at Elite and other places like it, and it tries to be different. Najar largely disapproves of the style of tutoring that takes place at other centers around SCV, such as segregation based on test score.

“So, there’s like the dumbsh*t room,” says Najar of Elite, “and the privileged room.”

He says that students “live under the cycle of privilege,” and wants to break that. Najar describes GPA as “not the traditional hagwon” and says that students at places like Elite have “cultural capital”: a know-how that Asian students have because of membership in a community centered around test prep. Instead of replicating this same culture, GPA mirrors a kind of liberal arts model of Western academia, even in its economic policy. Najar says that he will turn no student away because of an inability to pay, and that he is “trying to create economic and social value.”

But it’s not just other test prep centers that GPA is up against. It’s also a rampant private tutor market. One GPA student says that if he hadn’t found GPA, the only other option “would’ve been the person who was [his] sister’s college tutor, who was really expensive.” GPA is even up against a common theme in several classes at West Ranch: a focus on worksheets and a fill-in-the-blank mentality.

According to Najar, GPA exists to fill a niche. GPA exists because students “don’t know how to write. Because no one’s taken the time to teach them how to write.” It is a supplemental education, which he argues students desperately need.

But the problem with breaking The System is that The System works. While Najar explains that colleges and universities “are looking for somebody who’s bigger than numbers,” most students, out of necessity, place their focus on playing that numbers game. Places like Elite might be expensive and even demoralizing at times, but they remain because they work. They have a focused goal — get students into their four-year colleges, make parents proud — and GPA also recognizes this.

GPA will “still provide SAT as long as SAT is around,” and “still get you a five on the AP if you’d like one,” but this happens deep within an intent on reshaping and redefining that System.

Najar’s dream of that charter school persists. He says that plans are in the works to have GPA accredited, so that students could take classes there either part-time or even full-time.

At the present moment, however, the prep center still serves the same utilitarian functions as places like Elite, but at the same time, it tries to be different. It’s a paradox.

“[The business] is something I reject while at the same time, I’m in it,” says Najar. “But, I’m gonna try to redefine it and come out the other side as something else. I don’t know what that is yet. But, I hear that question.”

He adjusts his glasses.

At the end of the day, however, it seems like these test prep centers are not intrinsically pathological, but rather symptoms of much broader societal problems. The divide in test center scores that coincides with socioeconomic divides wouldn’t exist if the resources restricted to test prep centers were available to all. Asian-Americans wouldn’t be forced into a game that they largely created if myths of the “Model Minority” didn’t exist. And the incessant drive to increase one’s score wouldn’t exist without an even more incessant demand to satisfy the whims of the College Board, parents and society at large.

As it stands, academics largely exist in a particular game, and test prep centers are just another way of playing it.