A bright side during depressing times: How being quarantined can benefit the world and ourselves 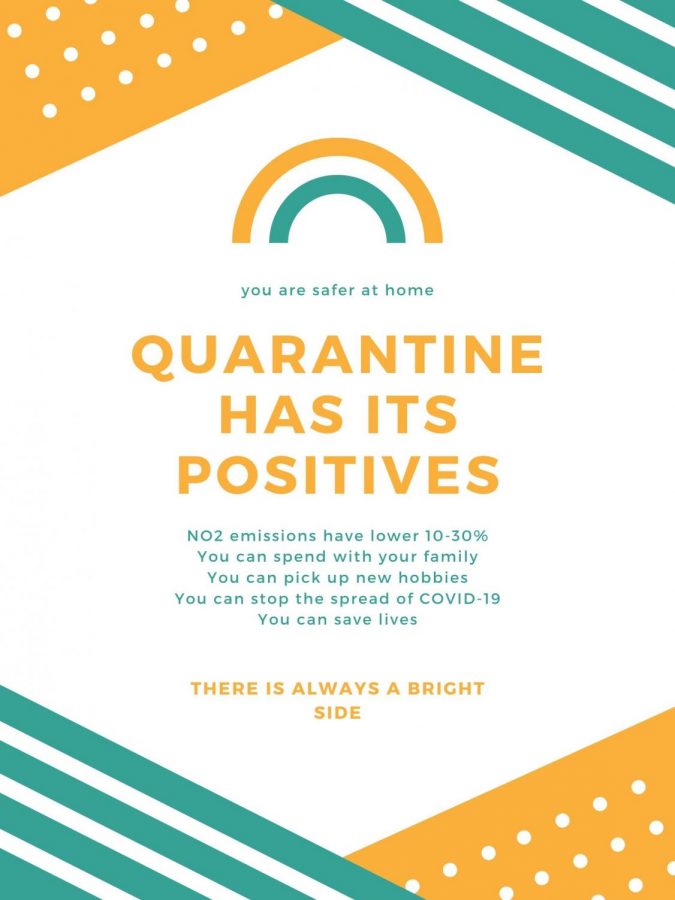 The coronavirus is wreaking havoc over humanity during these trying times, causing much of the population to be under an at-home quarantine. As the number of cases just surpassed 1,000,000 worldwide, staying indoors can lower the spread of this virus and, as the World Health Organization puts it, “flatten the curve.” This curve refers to the projected number of new cases over a period of time.

Currently, the health care system is working its hardest to provide for too many cases than it has the capacity to handle. Flattening the curve would mean to stagger the number of new cases over a longer period so that doctors and scientists have more resources needed to care for more patients, according to WHO spokesperson Christian Lindmeier.

While most of the world’s population is isolated in their homes, the great outdoors has been noticing a few positive turnouts. For example, The New York Times emphasized the decline of air pollution in major cities such as Los Angeles, Atlanta, Seattle, Chicago and New York. This was proven using photos obtained from emission-detecting satellites looking for levels of nitrogen dioxide, or NO2.

The Environmental Protection Agency explains that NO2 is a specific gas that is released into the atmosphere when fuel is burned. The decreased amounts of vehicle usage due to social distancing and being quarantined has, in turn, led to the slowing of NO2 production.

The NASA and European Space Agency’s satellites also picked up a decline of NO2 especially taking place in the origin of the coronavirus: Wuhan, China. During the outbreak, Wuhan saw drastic losses in this gas’ emissions. This trend also spread to the rest of China. NASA states that the levels of NO2 around Wuhan have decreased by 10 to 30 percent.

Besides the minimization of air pollution around the world, many are using this period of quarantine as a way to bond and become closer with their families. To get out of the house, some are walking around their neighborhoods with their pets or loved ones. To show community involvement, many eager citizens are writing inspiring notes or drawing detailed pictures on the sidewalk using chalk.

For instance, “Keep calm and use Lysol” and “Spread love, not germs” were spotted on the ground with pictures of flowers and smiley-faces here in Santa Clarita.

Many parents are bonding with their kids now that students are offered continued learning from home. People who are stuck at home are learning how to cook, knit, draw, solve a rubix cube and try many more exciting hobbies.

Being quarantined is scary as it causes tension and anxiety surrounding the coronavirus. Questions and concerns are rising as we continue to stay at home and six feet away from people at all times. People are being forced to scavenger for hand sanitizer, toilet paper and many other home goods. This only adds to the already nerve-racking situation and stress on civilians.

However, looking for a bright side can put ease to a racing mind and help one relax in the midst of this stressful event. While at home, try to make the best of it. Text people who you haven’t talked to in a while. Try a new activity. Walk your dogs. Take a hike. There is always a lighter side to these dark times.

One example of someone finding the silver linings in this frustrating event is Andreas Neuenkirchen, a German novelist and essayist based in Tokyo, who describes his personal outtakes on his wife working from home while being quarantined in Japan. “I was actually relieved. For her, because she’ll be able to get a bit more sleep in the morning and save herself the hassle of the commute. For me, because, with my phantom fear of her watching every move I make (through the walls), I will finally get some work done,” states The Japan Times.

“It is so important to keep a positive mindset during quarantine. Staying connected with friends, which can be really hard during this time, is crucial for our mental health. This is why West Ranch ASB has been doing virtual spirit weeks! We are trying to keep students connected to teachers and classmates,” they explain. “Seeing that your friend is thinking of you on Miss You Monday or seeing a motivational video from a teacher can make the students really feel connected.”

We will get through this together. Remember to keep washing your hands and avoid touching your face. Stay healthy, Cats!