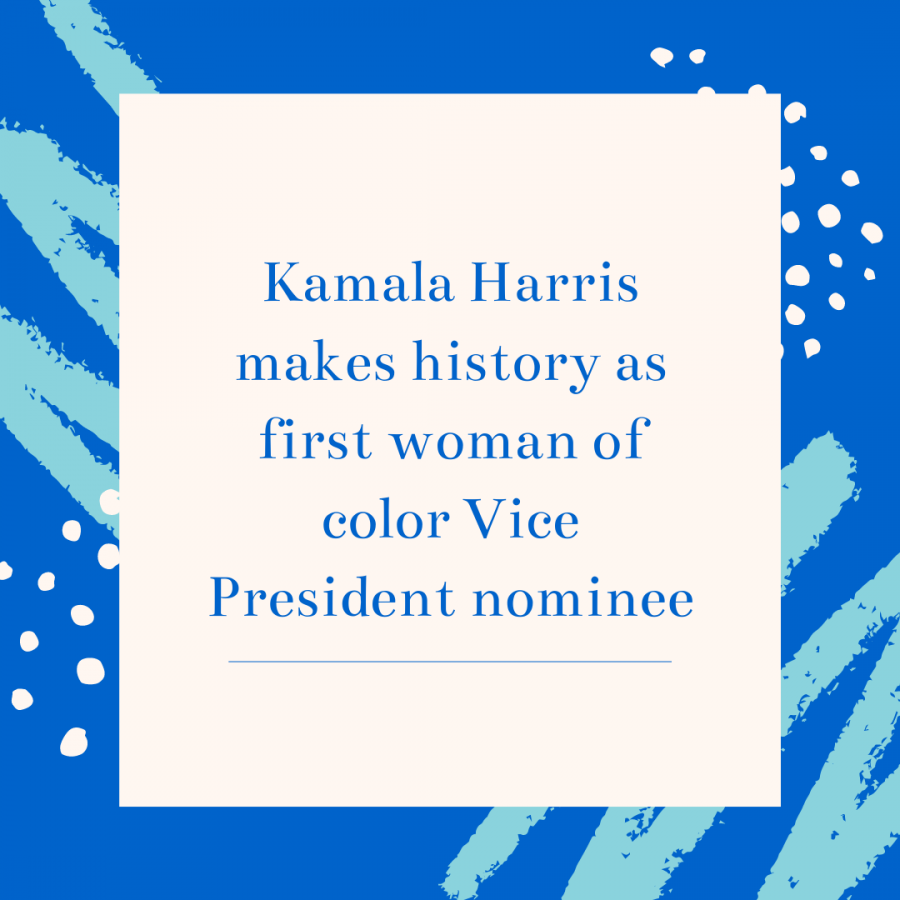 In her speech at the convention, Kamala Harris accepted the Vice Presidential nomination, stating that she stands by “a vision of our nation as a Beloved Community—where all are welcome, no matter what we look like, where we come from, or who we love.” According to The New York Times, while Harris is the third woman to accept the vice presidential nomination, she is the first woman of both African American and Indian descent to be nominated for national office by a major party.

According to NPR, Kamala Harris has several accomplishments which make her qualified for the role of vice president. Born in Oakland, Harris is the junior senator from California, and is known for being a tough questioner in Senate hearings. This political experience can help her gain the trust she needs for this year’s campaign.

Prior to her work in the U.S. Senate, Harris worked as District Attorney of San Francisco and was later elected as California’s Attorney General, making her the first African-American and first woman to hold this position. Throughout her years as an attorney, she focused on prosecuting homicide, robbery, and child sexual assault cases, according to the State of California Department of Justice.

“I don’t know that many Vice Presidential candidates have ever been prosecuting attornies, so she’s got that perspective,” Mrs. Arrowsmith explained. “Her personal background, her family story—that ability to see a view of America that is different from traditional politicians and have that shape the type of advice she would give to a president or presidential candidate on the campaign trail.”

According to Politico, Kamala Harris has been at the front of many policy fights. During her presidential campaign, Harris supported expanding the Deferred Action for Childhood Arrivals program—DACA, created during the Obama Administration—for migrants who were brought to the US as children. Harris also supports abortion rights, climate change legislation, expansion of DACA, and LGBTQ+ rights.

Not only does being a person of color make it more difficult for her to be taken seriously in the political world, but being a woman on the campaign trail can also have its drawbacks.

“Men run for office confidently whether they’re qualified or not,” Mrs. Arrowsmith told The Paw Print. “Women feel the need to be super qualified for whatever office they run for because, until recently, it’s been very rare.” She continued talking about the struggles women face in politics and how they are “reshaping what campaigning looks like rather than trying to emulate and adopt what men do—women are just themselves.” She goes on to say that this can be more appealing and lead to a win.

Mrs. Arrowsmith explains how Biden and Harris will work together to win the campaign. “The vice presidential candidate can go on the attack more and I think we see that in Kamala Harris’ skillset,” she told The Paw Print. “There’s been no one like her before. I think we’ll just have to wait and see in real time, as it unfolds, what she brings.”

What also gives Kamala Harris a greater chance of becoming vice president than previous female nominees is the position of Joe Biden in the election, who is currently leading. In the past, women have been brought on by presidential candidates when they were already behind in the election to boost their campaigns.

Harris’ nomination could potentially lead to more record-breaking headlines, and it is one step forward for our country in a more diverse direction. However, Harris’s nomination has garnered disapproval from many, who believe she cannot serve as Vice President. Whether or not people support her, Kamala Harris is a big front-runner in the election and represents the shifting ideals of the American people.