A recap of the Democratic and Republican National Conventions 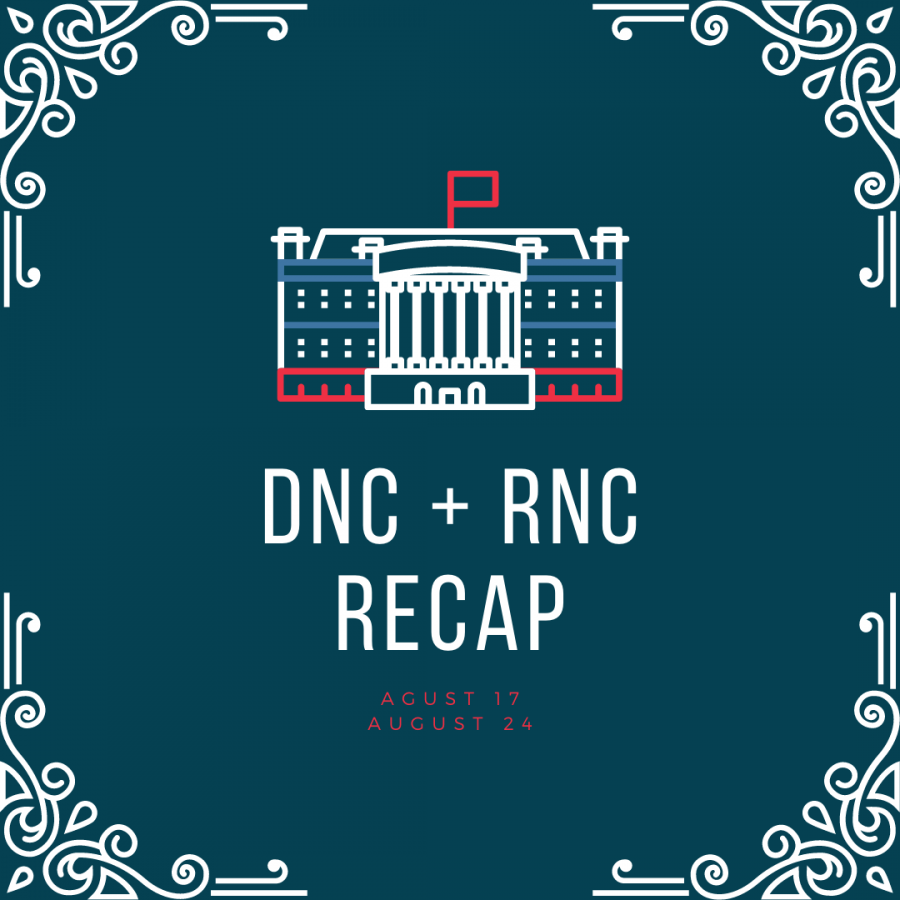 During the weeks of Aug. 17 and Aug. 24, the Democratic and Republican parties held their National Conventions. These events, occurring every four years, are held so that both parties can formally nominate their respective candidates for President and Vice President.

However, 2020 has been a year of the unprecedented— a reality that was reflected

during both conventions. This election year, the political climate between Democrats and Republicans has been especially tense, and the overlying message from both parties was clear— the other must be defeated in order to preserve the soul and future of America.

The Democratic National Convention kicked off on the night of Aug.17. Due to the COVID-19 pandemic, the event was held virtually, with participants attending through a video conferencing platform. It featured a variety of speakers, from celebrities, to longtime Democratic politicians and American civilians. This year, the Democrats’ primary goal was to rally support for their Presidential and Vice Presidential nominations: Joe Biden and Kamala Harris, respectively. Both gave powerful statements following their nominations. Other standout speakers of the convention included former First Lady Michelle Obama, who spoke of the urgency of this year’s election, and former President Barack Obama, who staunchly criticized the Trump Administration. Many longtime Republicans also spoke, highlighting the DNC’s overarching message that President Trump must be voted out.

“I have never seen a party give so much ‘time’ to members of the opposition party as the DNC did this year. This would be unimaginable in years past,” explains AP Government teacher Mr. Von Busch. “But 2020 is unique.”

Overall, the Democratic National Convention presented a strong, unified party base backing their nominations for the office of President and Vice President. Only time can tell whether this message will manifest in stronger support for the Biden-Harris campaign.

The Republican National Convention took place a week after the DNC, kicking off on the night of Aug. 24. The main goal of this event was to push for the reelection of President Donald Trump and Vice President Mike Pence.

“The Republican party is now the party of Trump. Those who do not agree with the President have left or been pushed out,” Mr. Von Busch remarks. “It will be interesting to see what the long term impacts will be on the party after he leaves office, whether that be in 2021 or in 2025.”

There were many speakers at the RNC, and similarly to the DNC, they ranged from key party politicians to everyday American civilians. The underlying message from each speaker was clear: that America as we know it would change should the Democrats come to power, and not for the better. Unlike the DNC, many speeches were made in front of live audiences, where social distancing guidelines and mask-wearing went ignored.

A few notable speakers included Former Governor of South Carolina and Former Ambassador to the United Nations Nikki Haley, who spoke of President Trump’s numerous achievements and qualifications, and First Lady Melania Trump, whose speech acknowledged the challenges presented by the coronavirus pandemic and pushed a message of unity. In addition, numerous other members of the Trump family spoke.

Overall, the RNC hoped to reinvigorate support for the incumbent President and Vice President by praising their achievements, and stressing the consequences of a Democratic presidency.

Election Day is Nov. 3, and as of Oct. 19, is just 15 days away. 2020 has taught us the importance of remaining politically active and exercising our civic duty as citizens of this country to vote for our political representatives.

“I hope all that are old enough take the time to get out and vote this year,” Mr. Von Busch expressed. “For those who are not, the mid-term elections in 2022 and 2024 Presidential race will be here before you know it!”

The deadline to register to vote in California, either online or by mail, is Oct. 19. Cats, if you or a family member still need to register, or want to find out more information about election processes this year, please visit registertovote.ca.gov/.