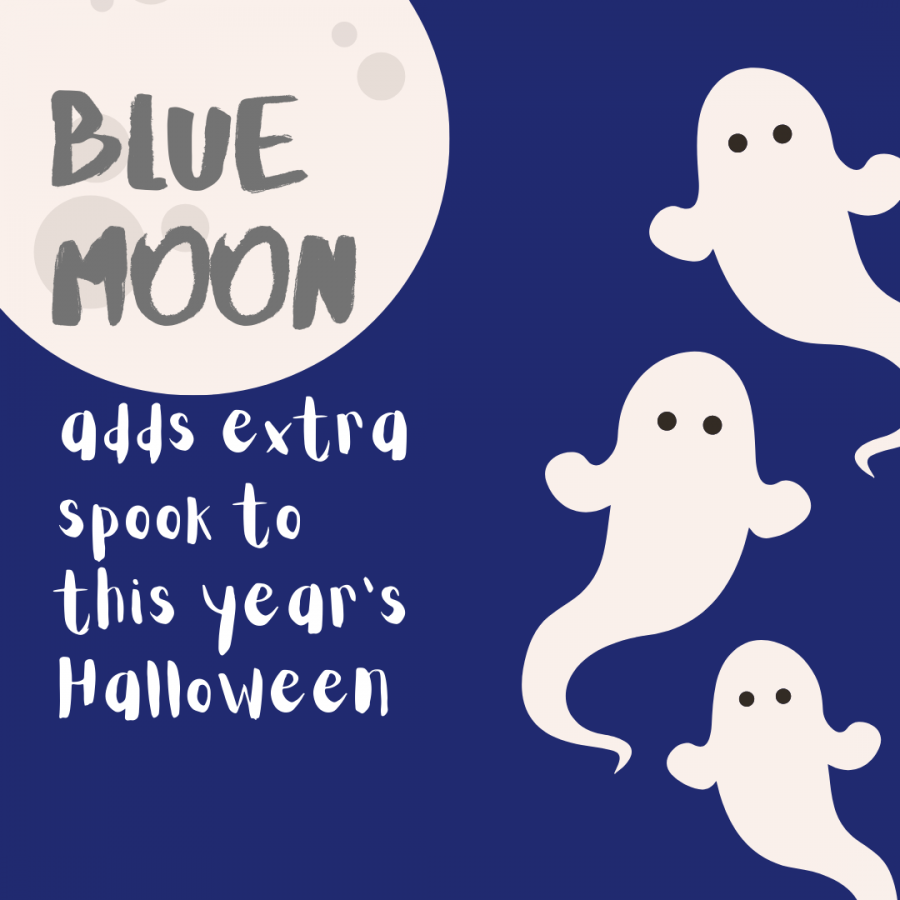 A rare occurrence commenced on Halloween this year: a blue moon appeared in the sky around 6 pm. Unlike the name suggests, a blue moon is not necessarily the color it is thought to be. As people looked up into the sky, some may have noticed that the much anticipated colorful sight was just about the same visually as any other full moon: white and gray.

“Before I saw it, I didn’t know what it was, but after I saw it I realized that it’s when the full moon is two nights in a row,” explained freshman Emma Gorelick.

It is easy to assume that the moon turns blue during this event due to the name, but in actuality, it means that there was an extra full moon in the same month.

The real question here is why do blue moons occur? According to Rebecca Ramirez at NPR, the lunar cycle is shorter than calendar months, lasting only about 29.5 days according to the synodic cycle, meaning that there will be a second full moon within the same calendar month. Blue moons occur when volcanic ash particles are large enough to block red wavelengths of light, while other wavelengths are the same as usual. Along the way, blue wavelengths are scattered, leaving behind longer/redder wavelengths. However, these colors are just a trick of light, and the moon will always remain a gray and white color, so the name deceives the reality of the moon’s appearance.

The name, “blue moon,” left many students, including sophomore Jonathan Dolce, surprised when they gazed upon the normally colored moon on Halloween. “I intuitively would’ve assumed the moon would be blue, but was surprised that [it wasn’t.] It was only later I learned that the moon doesn’t actually turn blue,” he expressed.

There has to be enough ash of a particular size kicked up into the Earth’s atmosphere to scatter all of the smaller red light particles, making it look bluish,” explained NPR reporter Rebecca Ramirez. For the moon to appear blue, there has to be enough matter of a particular size kicked into the atmosphere to scatter red light, such as during the enormous 1883 eruption of Indonesian volcano Krakatoa. This outburst of matter led to the moon appearing blueish and sometimes greenish during the years after the eruption. The ash particles were large enough to block out red wavelengths of light, while other wavelengths carried on as usual, leading to this bluish color.

The full moon this Halloween was called a “blue moon” since it’s the second full moon to happen in the same calendar month. This happens every 2.7 years and the term refers to the third of four full moons to happen in a season, or more officially “between an equinox and a solstice in that year.” A blue moon is not rare, but what made the occurrence on Saturday particularly special is that this was the first time a blue moon was seen on Halloween since World War Ⅱ in 1944.

The last blue moon occurred on March 31, 2018, but many do not remember this event too clearly. West Ranch freshman Emma Gorelick explained, “I don’t remember seeing it in 2018, but I remember people talking about it. This goes to show that this phenomenon is common, yet still a special occurrence to witness.”

There will not be another blue moon until August 2023. Waiting to see this beautiful work of nature and astronomy is not particularly fun, but until then, we can look forward to a well-known lunar eclipse occurring on May 21, 2021: a “blood moon.”