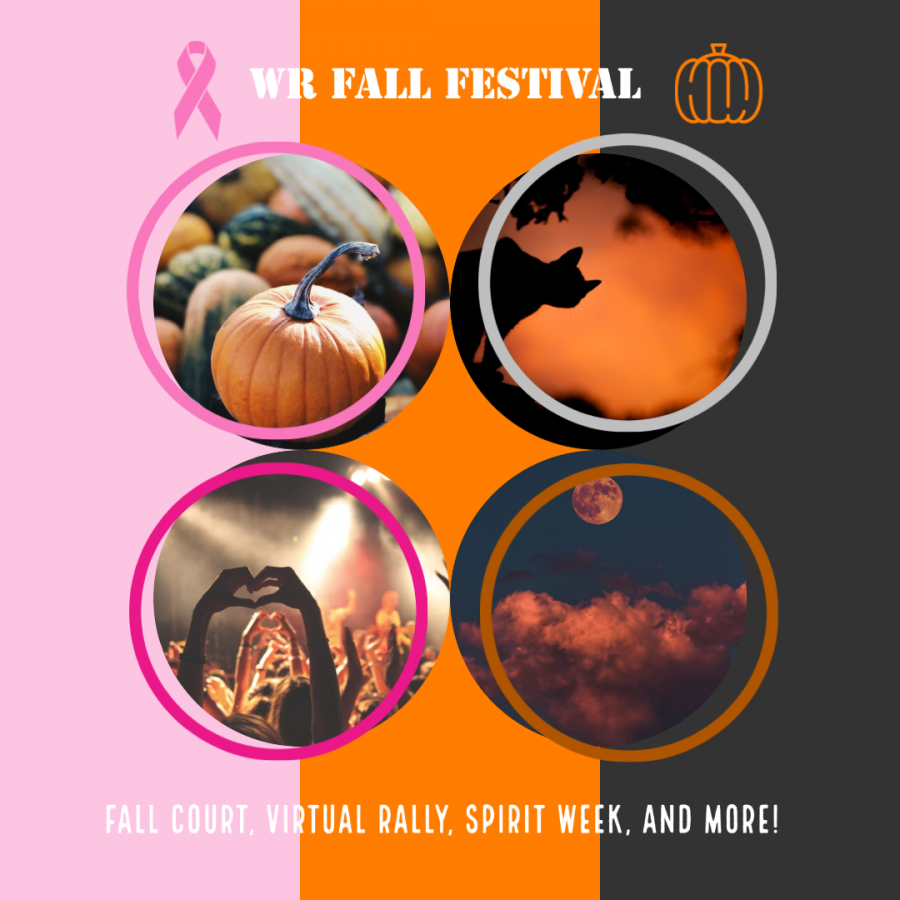 Just two weeks ago, West Ranch’s first ever Fall Festival took place. The entire month of October was filled with many surprises for hard-working students who were busy adjusting to Distance Learning. Starting on Oct. 6, when Wildcat Fall Court nominations began, ASB hosted numerous events for the spooky season.

Junior ASB member Carolina Peck stated, “Ultimately, my team and I and the rest of ASB just wanted to spread some spirit. At the time when we were planning the rally, we were a little over halfway through our first distance learning semester and I know a lot of people were feeling disconnected, so we thought this would be a great inclusive experience for the school.”

During the month, students were able to nominate their fellow freshmen, sophomores, juniors and seniors for Fall Royalty until Oct. 12, when nominations closed. Freshmen Julia Lohla and Zach Wyre, sophomores Victoria Davis and Madison Haynes, and juniors Cassidy Clarke and Jake Sullivan were appointed as Royals in Waiting for the Fall Court. The Senior Royalty Court was filled by Riley Blaugrund and Walker Eget after another round of voting.

Students also had the chance to donate blood to the Fall Blood Drive, as well as participate in the Pumpkin Carving Contest. Julia Flavell won  Spookiest Pumpkin, while Carol Wahba won Most Creative Pumpkin and Alexander Hepburn won Most Unique Pumpkin.

From Oct. 20 to Oct. 22, ASB held a scavenger hunt as a class competition for a prize of an In-N-Out gift card. Students solved fun riddles and clues to find hidden pumpkins all around the neighborhood.

“I personally thought that the scavenger hunt was a pretty good idea,” commented junior Eric Lee. “I thought it was a pretty safe way to have fun.” Each clue was posted on West Ranch ASB’s instagram account so students could access it easily.

Additionally, the last week of October was designated as WIN week, or What I Need week. Teachers didn’t give out any new assignments or teach new material, and students were able to treat this time as a break from the hectic Distance Learning schedule, or catch up with their work. WIN week also doubled as a spirit week, called Pink Out! Scare Away Cancer Digital Rally Week.

Living up to the rally’s name, the day before Halloween and the last school day of October was the virtual rally for cancer.

Lee expressed that his favorite part was “watching the DJ through YouTube and Twitch.” The rally opened up with Cayleen Green from the nonprofit Find Your Grind who had hosted a motivational speech assembly for West Ranch in September. She played a few songs as the DJ before WRTV introduced the segments for the rally.

Lily Fair opened up the digital rally with her rendition of the National Anthem, which was soon followed by a moment of silence in honor of those who fought breast cancer and lost their lives.

The rally also featured performances by the West Ranch Cheer Team along with the West Ranch Dance Team, who were masked and standing a safe distance apart. Students got to watch a Lip Sync battle between West Ranch teachers as well, while they cheered on their fellow students and breast cancer survivors.

The seniors ended up winning the class competition throughout the month of October, and the rally ended with the announcement of West Ranch’s Fall Court.

Even though we couldn’t meet in real life, students were still able to express their fall spirit through an online platform. This fall season has definitely been different, but the month of October has shown that there are still various ways to have fun.