The Different Holidays in Season 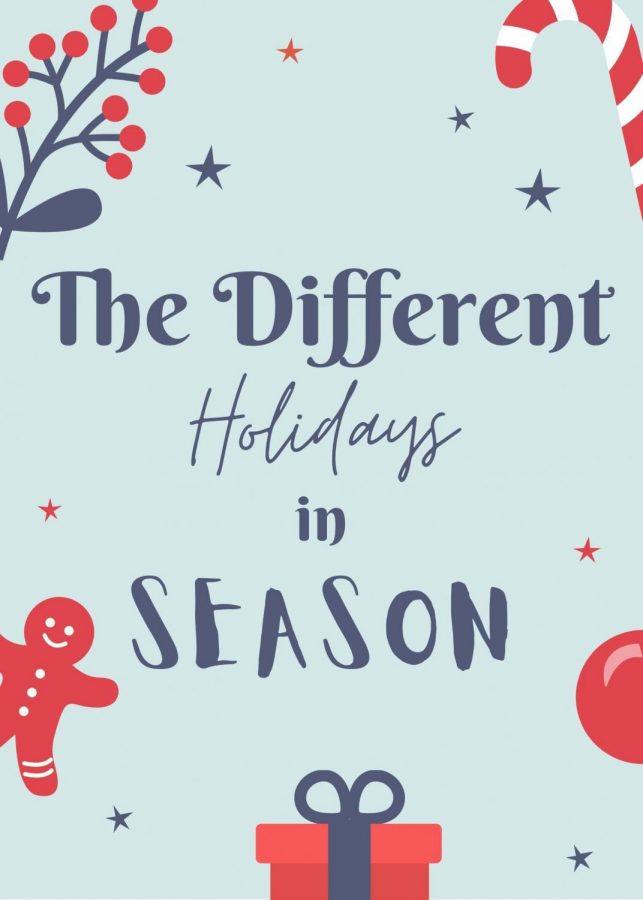 It’s finally the holiday season! This is a time for celebration in many parts of the world and in many different religions and cultures. There are mainstream holidays that billions of people know about and celebrate, but there are also numerous other holidays that are not common knowledge.

Perhaps the most well known holiday is Christmas. Christmas comes from Christianity, and is celebrated because it marks the birthday of Jesus (Christ). In keeping with religious customs, many families attend church and sing holy songs. They also light candles and listen to sermons about Christ’s life and the celebration of it. However, modernization has made Christmas somewhat less religious. Many families nowadays celebrate with no religious meaning behind it, and simply give gifts to family members and have feasts to celebrate a fun holiday.

Another holiday that might be familiar to many students is Hanukkah. This holiday reaffirms the ideals of Judaism and celebrates the rededication of the Temple of Jerusalem after it was taken by a group of Jewish warriors called the Maccabees. Hanukkah is traditionally celebrated in eight days, and on each day, a candle is lit and a gift is received.

“We meet up with our family to light candles, and instead of getting one present each day, we go skiing for eight days,” Bogoniewski told the Paw Print. Hanukkah includes a variety of religious and nonreligious customs, and while some families stick to the traditional method of celebrating, others add their own style, much like the Bogoniewski family.

One holiday you might have never heard of before is the Feast Day of Our Lady of Guadalupe. This day, Dec. 12, commemorates the day in which the Virgin Mary was encountered by a Mexican peasant in a desert near Mexico City. This is a big holiday in the Mexican Catholic community, and families come together from all over to celebrate this holiday together.

Alonso Munoz, a student here at West Ranch, celebrates the Feast Day of Our Lady of Guadalupe, and told the Paw Print about how his family celebrates the holiday.

Sticking with the Christian community, another holiday is Three Kings Day, often called “Little Christmas.” Three Kings Day represents the day that the Magi visited Jesus and became the first Gentiles to see Him. It is celebrated on January 6.

West Ranch students celebrate a diverse range of holidays, and student Jadyn Tunnell is one of many who celebrates Three Kings Day.

“My family celebrates Three Kings Day by leaving our shoes outside on the front porch so as to seek a visit from the three wise men that visited Jesus on this day. When you wake up the next morning, you will find that these kings have left gifts inside your shoes,” Tunnell revealed to the Paw Print. Feasts are also an important part of this holiday. Because Three Kings Day is often overlooked in the shadow of Christmas, Tunnell told the Paw Print that “I want people to know that if you celebrate Christmas, it is also important to remember the people that blessed him and gave his family gifts that helped them survive (as Mary and Joseph were quite poor) and this day should be thought of as a day to honor these kings and reflect on the impact that they had on Christ’s life.”

New Year’s is another classic holiday. Though it isn’t a particularly religious holiday, many people still celebrate and go all out for it. New Year’s celebrates the coming of a new year and leaving behind the old one. Many families will celebrate by staying up all night on December 31 and watching New Year’s countdowns on television or in person. Once the countdown hits zero and a new year begins, families usually celebrate together while watching live firework shows. Another huge part of New Year’s is resolutions. People set goals for themselves that they hope to accomplish in the new year, some of which are individual goals while others are goals for the whole family.

Victoria Vo, a West Ranch student, explains how she celebrates this holiday: “My family wears red on the day it starts and the kids get money from aunts and uncles.”

A new year in Chinese culture marks the beginning of a new zodiac cycle. The twelve Chinese zodiac signs in order are the Rat, Ox, Tiger, Rabbit, Dragon, Snake, Horse, Goat, Monkey, Rooster, Dog, and Pig. Depending on your zodiac sign (the sign of the year in which you were born), people can supposedly be either very lucky or unlucky.

The great thing about holidays is that you don’t have to be a certain religion, culture, or age to celebrate them. Whatever community you come from, holidays bring you closer to friends and family. Whether you celebrate Christmas, New Year’s, or Hanukkah, happy holidays!