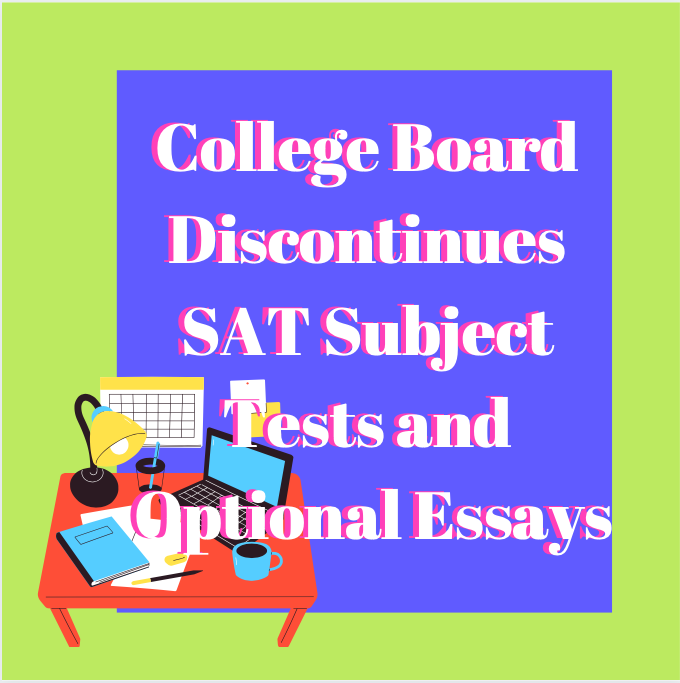 On Jan. 19, the College Board published its decision to discontinue SAT Subject Tests and the optional essay portion of the SAT. They explained that the subject tests were now unnecessary as AP resources are widespread enough to gauge student performance.

As for the essay, the College Board claims that the SAT Reading and Writing tests were sufficient in testing English proficiency, making the writing assessment unnecessary. They elaborated that their decision was likely to happen anyway but was accelerated because of COVID-19’s unprecedented effects on testing availability.

All SAT Subject Tests were immediately cancelled after the College Board refunded all students who signed up for a test in the spring semester of the 2020-2021 school year. The essay portion of the SAT will continue to be offered until June, but students can get a full refund if they have already signed up for it.

West Ranch Sophomore Swarada Kulkarni explains her stance on the matter: “I think for those who do well on the AP test, the subject test is an unnecessary repetition that tests the same concepts that the AP exam does. However, for those that don’t achieve their goal on the AP exam, the subject tests may motivate them to study more until they can grasp all the concepts correctly.”

She continues, “Personally, I would have liked to take the subject tests just as a way to retest my knowledge and keep my studying active even after each AP test. However, this is just a preference, and CollegeBoard’s decision doesn’t really harm or benefit me.” Kulkarni had so far only planned to take the Biology Subject Test, as she had taken the AP class freshman year.

Another sophomore, Tanya Dhanda, expressed her mixed feelings about the discontinuation. “I’m kind of both ways. There’s a lot of less stress, but also there’s now less ways to stand out for colleges.” She went on to explain how she would have liked the option of having one, whether or not she decided to take it.

Though some are happy about the cancellation of the SAT Subject Tests, the decision has left many students frustrated. Junior Katelyn Tao was among those unhappy with the College Board’s decision saying, “I’m disappointed because I studied and was prepared to study for a couple more subject tests. I was also hoping to make up one that I scored poorly on.”

She also said, “I am really sad that they are cancelled because I was hoping I could take the subject tests to try to show my merit to colleges as I think a lot of other opportunities have already been cancelled this year.”

The cancellation also poses a problem to those who were preparing for SAT Subject Tests this semester, as they are now stuck with study books they have no need to use. According to Tao, “Luckily, I have been using books that my older brother used, but I have several friends that bought books for the [Math] Subject Test and they’re all really bummed that they can’t use them.”

Tao hopes that “other students don’t feel too disappointed about the cancelling and realize that it’s not the end of the world, because there’s lots of other opportunities for them to show [colleges] what they’re capable of.”

Though standardized testing will be permanently altered from now on, students will continue to persevere in their future endeavors of test-taking.