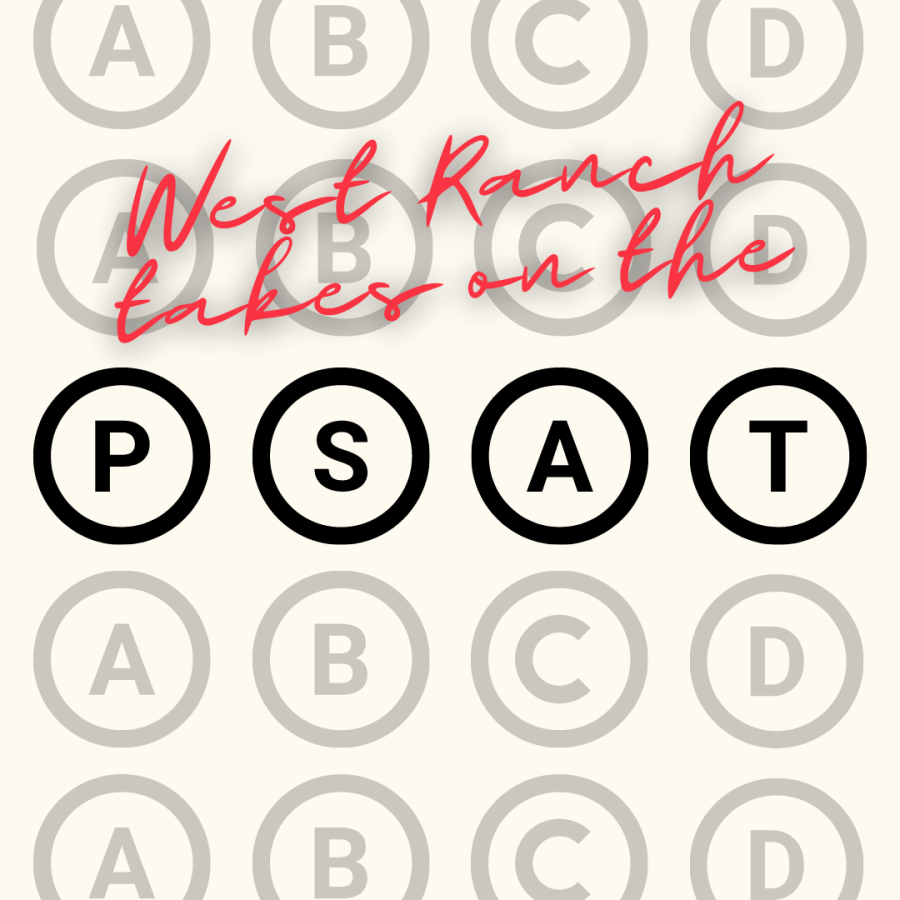 The annual PSAT is a shortened version of the regular SAT and is designed to help juniors prepare for the SAT. They both test on the same subjects and include the same four sections: reading, writing and grammar, math without a calculator and math with a calculator.

Students may go into the PSAT with no preparation to gain a baseline for future studying, or they may choose to begin their SAT preparation earlier. “I started studying for the actual SAT at the beginning of the summer, so that’s been my preparation up until now,” junior Ella Shin told the Paw Print after the test.

Even though scores are released two months later, many juniors are already reflecting on how they performed.

“I think I did pretty well on the PSAT,” West Ranch junior Bryce Blaugrund said. “I did some studying and it’s easier than the SAT.”

Last year,the PSAT at West Ranch was cancelled due to the pandemic. Even now, COVID-19 limits registration to 200 students in order to accommodate social distancing.

As a direct effect of this year’s lower capacity, PSAT tests sold out before every junior who wanted to take it was able to register. In previous years, there were enough tests that even a few sophomores were able to sign up.

In addition to SAT preparation, for juniors, a high score on the PSAT is also necessary to become a semifinalist for the National Merit Scholarship. According to the official National Merit Scholarship Corporation website, the nationwide scholarship competition awards $2,500 to each of the 7,500 students every year. Winners also receive additional scholarships provided by the college they attend and businesses in the industry that their major is in. Last year, CollegeBoard created “alternate entry”, which allowed students to use their SAT scores to apply after many PSAT test dates were cancelled due to the pandemic. Because becoming a semifinalist requires a PSAT score in the highest percentiles of one’s state, it is very difficult to qualify.

Mr. Gimber, a counselor at West Ranch helped proctor the test.“This year, we had six students that were considered for National Merit Scholarship Semifinalist, and last year I believe we had six as well. Some schools only average one or two students, so West Ranch does really well on the PSAT” Gimber said.

Even though more students were unable to take a PSAT this year compared to previous year, there are still more opportunities for both juniors and sophomores.

“For those that are interested in another opportunity for a scholarship, there are many others that they can apply for using their SAT score,” said Mr. Gimber. “For ninth and tenth graders that weren’t able to take it this year, I would definitely look toward taking it next year.”

Some of the resources that our student interviewees recommended for future students to utilize in their studying are the free practice PSAT tests and SAT tests available on the Collegeboard website.

For those who plan to take the test in the future, it is important to remember that the PSAT is nothing to worry about. At the end of the day, it is only a baseline to gain a better idea of what to expect and how they can improve for the SAT. To future PSAT takers, junior Ella Shin said, “Don’t stress too much about studying, if you take it totally blind, that’ll still be fine. There aren’t any consequences for if you do bad, you just get a scholarship if you do well.”

With another PSAT finished, good job to everyone that took it and good luck to everyone who plans to take it in the future!