The history of Thanksgiving 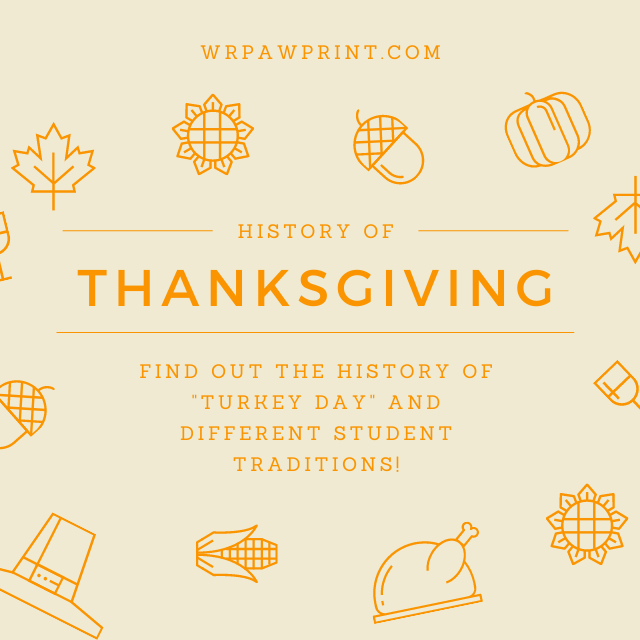 Thanksgiving Day is a national holiday that has been celebrated for over four decades in the United States.On the fourth Thursday of November, families and friends gather together to celebrate the harvest and the blessings of the last year.

Various traditions exist, but there are a few that are more recurrent than others. Across the nation, many choose to celebrate a “traditional” Thanksgiving, consisting of having a large dinner of specific festive foods, such as turkey, corn, stuffing, mashed potatoes, cranberry sauce and pumpkin pie. While sharing a filling meal, friends and families reflect on the past year and share what they are thankful for.

Kaitlyn Saxton, a senior at West Ranch, expressed, “I love Thanksgiving. I think that it is interesting that we begin learning about this holiday at a very young age. Beginning in Kindergarten, you learn the importance of being grateful and recognizing the privilege that surrounds us.”

Other popular ways to celebrate the holiday include tuning in to the Macy’s Thanksgiving Day Parade and watching The National Dog Show. Planning a friends-giving or having a potluck with friends are also popular traditions individuals participate in. Many also choose to attend religious services and give back to the community by handing out free Thanksgiving dinners for those less fortunate.

Creating new traditions happens almost naturally for some families and friends while celebrating. Freshman Arav Shah explained that one year, his family accidentally bought a really small turkey. “[That year, it] was just my immediate family so I had the honor of cutting the turkey. Instead of cutting the small turkey four ways I accidentally cut it in 3 ways so that way one person wouldn’t get a slice of turkey.”

From that point on, Shah and his family started a tradition based on this humorous story: “Basically one person that year didn’t get turkey and my family found that really funny. From then on, our family decided to make it a tradition that one of us doesn’t get turkey and has to fill up on other foods.” Shah said.

Sophomore Jesse Georgeson shared that during Thanksgiving, his family typically has family-friends over. In addition to a large meal, Jesse and his attendees participate in their own version of a marathon. “This event is one of the funniest things to witness. Each year it changes when we have the marathon. Sometimes we host it before ‘linner’ or after ‘liner;’ whatever everyone is feeling.”

Georgeson explained that the marathon consists of “board games like Monopoly and Ticket to Ride, sports events like spike ball, volleyball, wiffle ball, backyard games like corn hole, gold ladder, and bocce ball, and then a night scavenger hunt. It’s fun to see everyone get into teams and compete. We keep score of each team’s win and made the rule that the team with the most points have first dibs on dessert. Everyone gets super competitive.”

The History of Thanksgiving

In Sep. 1621, a small ship known as the Mayflower left Plymouth, England, carrying 102 passengers. According to britannica.com, pilgrims, an assortment of religious separatists (the Puritans) sought a new home where they could freely practice their faith. Other individuals also traveled to New England— led by the promise of prosperity and land ownership— where they endured brutal conditions that were not limited to starvation, disease and the lack of shelter.

After arriving in New England, they quickly met with an Abenaki Native American, who then later brought a member of the Patuxet tribe named Squanto. Squanto had escaped to London after being sold into slavery, which was where he learned English. Through this experience, he was better able to communicate with the settlers.

History.com describes how Squanto taught the malnourished pilgrims how to grow corn, extract maple tree sap, fish in rivers and identify and avoid poisonous plants. He also helped the pilgrims form an alliance with the Wampanoag tribe, which would continue for the following 50 years.

William Bradford, the governor of the colony that the Pilgrims formed in the New World, coordinated a celebratory feast lasting for three days to rejoice over the early colonists’ first successful corn harvest. The Smithsonian Magazine explains how Bradford invited the Native American allies, not limited to the Wampanoag chief Massasoit, to the entertaining event, starting the tradition of Thanksgiving in November of 1621.

Most Americans are familiar with the fall day in 1621, the day of the first ever Thanksgiving, when the colonists celebrated their first harvest with the Wampanoag Native American tribe.

However, over history, as new ethnic groups have come to the Land of the Free, the Thanksgiving holiday has begun to change. Using their culture’s ingredients, traditional cuisine has become more diverse, representative of the ethnic diversity of the United States.

Thanksgiving is an inclusive, open-to-interpretation holiday that gives every individual the opportunity to show their thanks, gather with loved ones, and give back.

Saxton elaborated on how this idea of thankfulness follows us on a daily basis. “Knowing that very different groups came to share a meal and slowly overcome their differences is something that we can totally apply to today. We need to remember that the country we live in was built upon various cultures, and so respecting and understanding the various Thanksgiving cultures is super important.”

Freshman Zane Zacharia concluded, “I think it is essential to come together as a group and acknowledge the importance of how Thanksgiving is about all the sacrifice that was put into the holiday.”

Cats, we hope that you take some time to show extra gratitude this month, whether it be giving your counselors a visit or complimenting your teachers. Happy Thanksgiving!