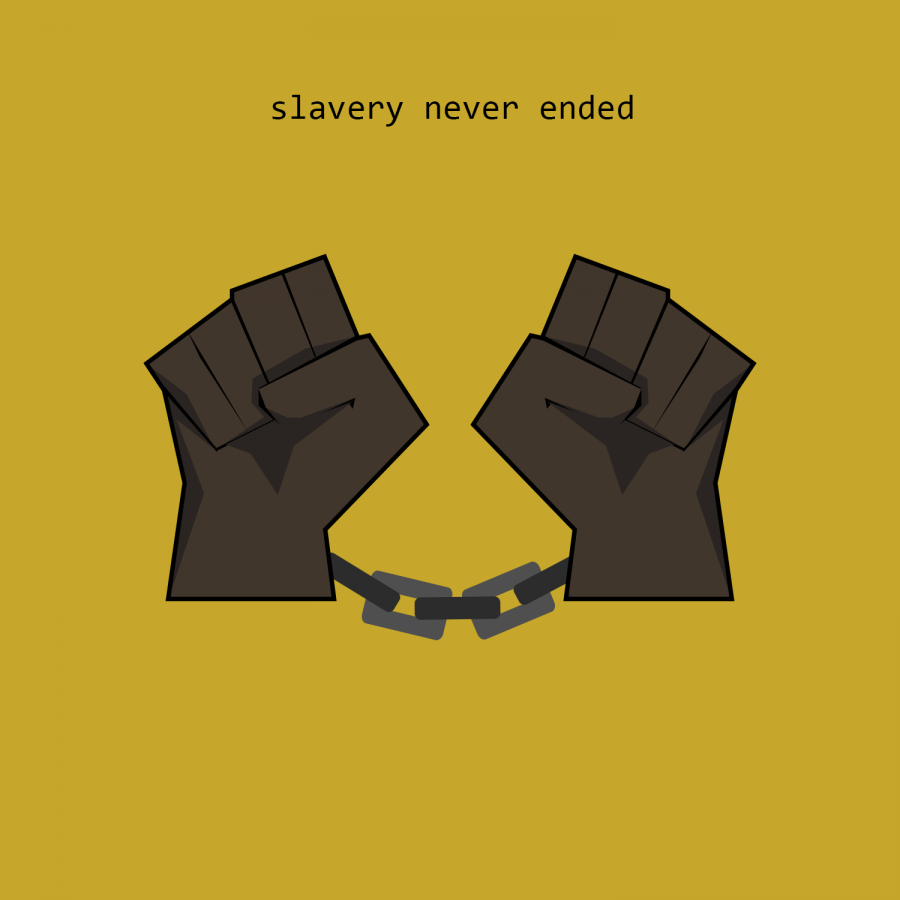 “Neither slavery nor involuntary servitude, except as a punishment for crime whereof the party shall have been duly convicted, shall exist within the United States, or any place subject to their jurisdiction.”

-The Thirteenth Amendment of the Constitution of the United States

Nearly every student in the U.S. has probably memorized these 32 words verbatim, remembering it as the amendment that abolished slavery. But, most seem to gloss over some of the most important words in the text — “…except as a punishment for crime.” In other words, it is illegal to enslave anyone except for criminals.

But that can’t be true; slavery was abolished with the Emancipation Proclamation, right?

Enter the prison industrial complex. In countless private prisons across the U.S. (and some federal prisons), more than 800,000 prisoners are forced to do labor such as manufacturing, cleaning, and farming, for wages that can reach as low as $0.00 an hour. Combined with the fact that black people in America are incarcerated five times more than white people , receive on average much higher sentences, and are twelve times more likely to be convicted for drug crimes than white people, the compulsive labor that prisoners are forced to do seems to look an awful lot like slavery.

If one was to look at the former slave plantation fields of Angola, where predominantly black prisoners can be seen hunched over picking cotton for hours on end unpaid in fear of punishment, it would definitely resemble the chattel slavery of the 18th century. Slavery never ended in the United States ─ it was simply reinvented.

When all of California was on fire a few weeks ago (as it always is), an article came out applauding prisoners who worked as firefighters. Underneath, swarths of soccer moms and suburbanites enthusiastically commented messages of praise and gratification for those “brave prisoners” who saved California “so much money.”

However, I had quite the opposite reaction. Yes, these prisoners are definitely brave, but how is it right that these people’s lives are worth less than $2 an hour? California is not saving money — they are robbing these people of a fair wage.

And it’s not as if these people are at any less risk than any other firefighters; according to David Fathi, director of the ACLU’s National Prison Project, “At least two [inmate firefighters] have died in California [and] [s]ix prisoner firefighters died in a single fire in Arizona back in the ’90s.”

It is not just the underpayment that is unsettling about prison labor, but the legal implications. The 13th amendment essentially equalizes prisoners with slaves. This means that prisoners have no legal rights, no constitutional protections. Prisoners can’t unionize. They can’t navigate the free market looking for a better job. They aren’t protected by minimum wage. They don’t receive workers compensation. Of course prisoners are supposed to consent to the labor that they do, but prison is a uniquely coercive work environment. With no legal protections, how are we supposed to guarantee that prisoners aren’t being forced to work?

Supporters of prison labor often cite the rehabilitative benefits that arise as a result. And amongst the very little studies that exist on this topic, this point does seem to stand up —  a study of federal prisoners found inmates who took part in UNICOR were 24 percent less likely to reoffend and 14 percent more likely to be employed a year after their release (albeit this study seems to be very susceptible to selection bias). However, where in the study does it say that paying prisoners much less than minimum wage will make them functioning members of society? This is no way logically or ethically justifies the gross underpayment and exploitation of these workers.

In response to these injustices, prisons all across the US have enacted and will continue to enact several demonstrations, such as hunger and labor strikes, to protest their underpayment, inhumane conditions and the general structure of mass incarceration. And I stand with them. If the United States truly wants to end slavery, they need to properly compensate and guarantee legal protections for prison labor.