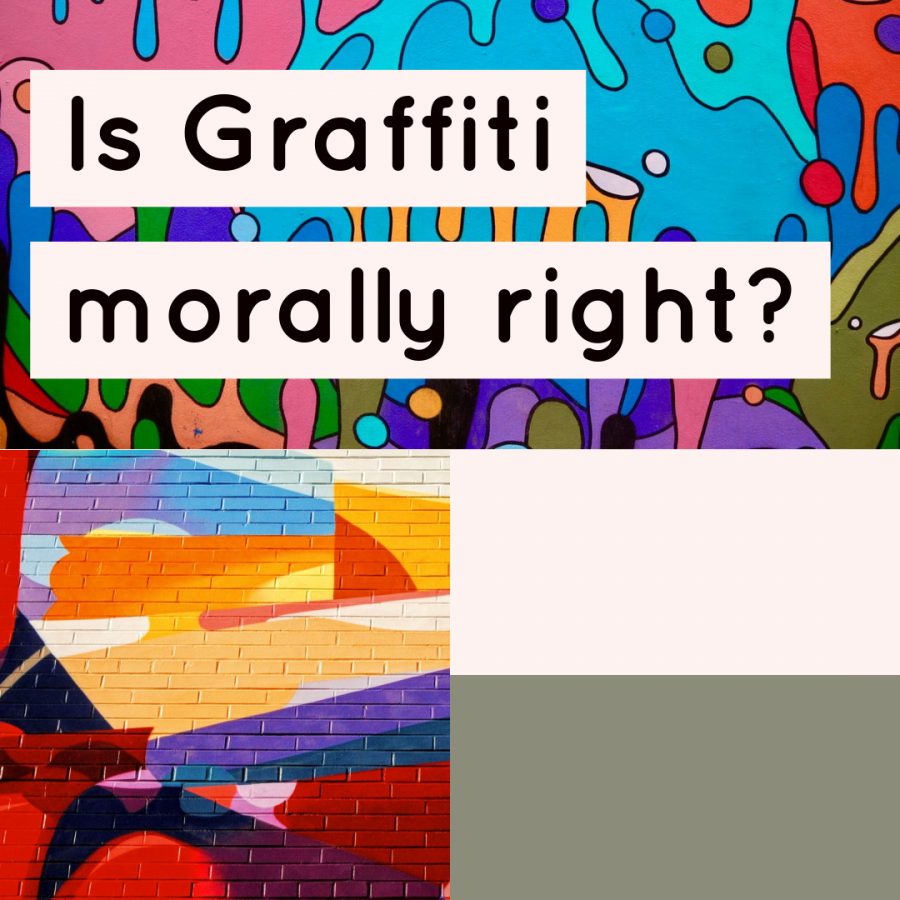 Imagine walking down the streets of Peru, one of the poorest countries of the world, and seeing some beautiful art on the walls around you. Should you have to be labeled as a morally “bad” person if you can’t afford to be a “good” person? In the world of graffiti, the answer is a definite “No.”

Even while walking down the streets of California, you’ll never come across the “f-word” written on the walls.

Graffiti is used for three reasons: to vandalize, to communicate or to express. Only one of the three, a minority, is not right–and you can guess–vandalism. However, if people start to believe it’s wrong, the government will take it away. And along with graffiti, the major benefits of it will be gone.

As Americans, we were guaranteed certain rights that should not be taken away. One of those rights is freedom of expression.

Graffiti is an outlet for so many people who cannot afford fancy oil paints and horsetail brushes. In fact, you might consider graffiti a preferable expression of art, since the artists involved in it only have some spray paint and a wall. Another art piece is another voice being heard, and banning graffiti is taking away thousands of voices. So just because some artists don’t have the money or resources to do what they love, graffiti is not morally wrong in any way.

Using some washable spray paint on a wall is a small price to pay for the thousands of other artists’ pieces that need to be or are recognized as revolutionary. Take the graffiti on the Berlin Wall, for example. These pieces represented and aided the freedom behind censorship, and united people when they were torn apart by war. Artists used this medium to bring East and West Germany together and create a lasting international influence.

It is common to think that the only purpose of graffiti is to ruin property. But you have to look past the negative actions and focus on its true significance: inspiration and the only outlet for many artists.

Now imagine driving through LA as bright, colorful paintings greet you from the walls. From far away, it may look pretty and harmless, but as you see more and more graffiti, you start to wonder what the purpose of all of this vandalism is. Graffiti does not inspire positivity, contrary to popular belief, and instead is just defacement of property. This popping and funky street art, seen everywhere you go, can be something you’ve never really thought about, or at least, never thought of the morality of it. Graffiti is not morally right because it can spread hate, the clean-up process is expensive and arduous, and it was made illegal for a reason.

A vast majority of graffiti spreads negativity. As curse words are painted on to the sides of buildings and walls, people are affected by this negativity.  Everyone has been exposed to some sort of hate, and they know how strong this can be. Places with more graffiti tend to be poorer, and if hateful graffiti is all you see, it can inspire hatred and even violence. This makes poorer areas even more unsafe as violence is bound to spread through hateful graffiti.

Additionally, graffiti can put more pressure on the people in charge of clean-up duty while simultaneously being super expensive to remove. As some feebly argue that graffiti is “beautiful” and “inspires positivity,” the people who have to clean up that mess have differing opinions. In fact, in Chicago, chemical trucks for graffiti removal cost $69,700. Even though they only require one employee, graffiti removal is not cheap. People think they are entitled to argue that graffiti is a beautiful form of art, when it’s not their property being ruined. The only thing people are entitled to do is art on things they own. Putting an obligation to the people who own the property to clean up someone else’s mess is not moral, and it’s unfair to judge graffiti just by how it looks, not where it’s located.

Finally, graffiti is also illegal. Defacement of property and vandalism is punishable by the law, and for good reason. The thing that most people don’t understand about graffiti is that it is done on other people’s property. It doesn’t matter how pretty, colorful, or even how positive the message is when the owner didn’t want it. However, graffiti is not just some spray paint on your property or your house. If you cross reference the definition for graffiti from Merriam-Webster, Oxford dictionary, and Cambridge dictionary, they all say “public.” Therefore, it is only categorized as “graffiti” if it is actual defacement of public property.

This is when most people argue that the artists can’t afford canvases and paper. However, this is the parallel of robbing a bank because you have no money. Because they can’t afford art supplies, they deface other people’s property, and that makes it moral? If someone is poor and they steal someone’s wallet, this still doesn’t make it moral. It’s the same for graffiti. Graffiti is definitely not moral because it spreads negativity, it puts pressure on the government to expensively remove it, and it was made illegal for a reason.

Try thinking about this next time you’re driving through LA, and maybe you’ll think about the morality of graffiti before you admire its “beauty.”