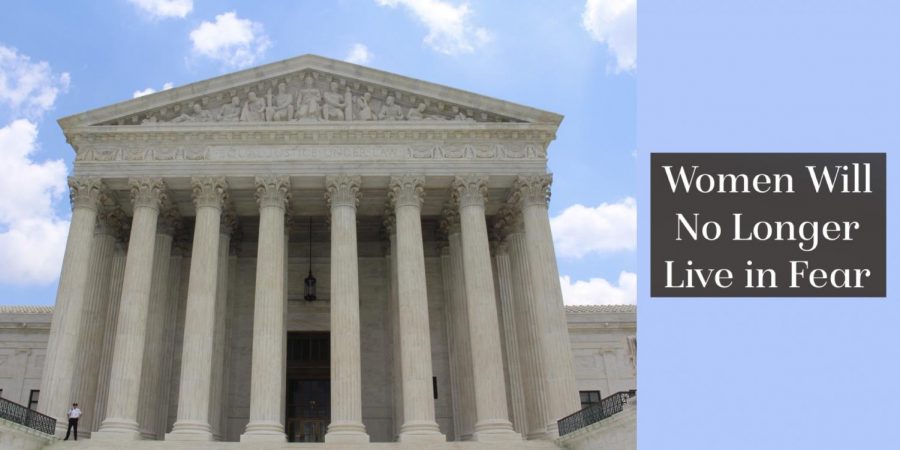 Women Will No Longer Live In Fear

How the Kavanaugh Case has Effected our Country

Don’t walk alone at night, especially if you have nothing to defend yourself with. Don’t wear things that are too revealing if you don’t want men to stare. Don’t drink things that are given to you by strangers. Don’t walk down the street, even in the daylight, because scary men driving by might whistle at you or call you names.

These “rules” replay in my head every single day. I am tired of living in fear.

I have worked on gaining confidence and ignoring the comments I receive from boys at school, as well as things I have heard shouted at me from car windows. I was finally beginning to grow unafraid.

Then, Brett Kavanaugh was nominated to fill the position of a Supreme Court Justice.

Dr. Christine Blasey Ford came forward in front of our country. She had to relive one of the most traumatic events she has ever had to experience. She was sexually assaulted by a 17-year-old when she was only 15. She attended a party, went to use the bathroom, and was dragged into a bedroom by Brett Kavanaugh and Mark Judge.

She recalls, “When I got to the top of the stairs, I was pushed from behind into a bedroom. I couldn’t see who pushed me. Brett and Mark came into the bedroom and locked the door behind them. There was music already playing in the bedroom. It was turned up louder by either Brett or Mark once we were in the room. I was pushed onto the bed and Brett got on top of me. He began running his hands over my body and grinding his hips into me. I yelled, hoping someone downstairs might hear me, and tried to get away from him, but his weight was heavy.” This occurred in 1982.

I believe every word she says. I believe her because if it were me, I would want to be believed. If I were standing in front of my country, speaking about an experience I tried so incredibly hard to forget, I would want people to stand with me.

One out of every six women are raped each year, and those aged 16-19 are four times more likely than the rest of the general population to experience sexual assault or rape. On the day of Ford’s testimony, calls to the Rape, Abuse, and Incest National Network (RAINN) spiked by 201%. Women across the nation gained the courage to speak up and get help because they were inspired by Ford. Her strength and composure will inspire me for the rest of my life.

Women are afraid to come forward because they think that they won’t be believed. However, seeing Ford remain so calm in the face of those who criticize her inspired these women to seek help.

That applause will echo in my head until I die. It shows me that men who are in power can say anything they want and be congratulated. If a woman were to mock a man who was sexually assaulted, she would be booed off the stage. Men have always been louder than women, no matter how strongly we fight back. Because women are “emotional” and should not be taken seriously.

The president didn’t stop there. He says that Kavanaugh is a “perfect” man, and that he could do no wrong. He is going through a lot. We should be respectful. Stop giving his family a bad name. Trump told the citizens of the United States, “It’s a very scary time for young men in America.”

Donald Trump has a history of blaming women for mistakes that the country is facing. He has also, on multiple occasions, discredited women because of their appearances. He has been accused of sexual assault, with 22 women coming out against him, and yet he is still the president.

Brett Kavanaugh was confirmed as a Supreme Court Justice after a five-day FBI investigation in which they only interviewed 10 people.

I do not believe that Brett Kavanaugh should have been confirmed. Having men like this in power takes away from the credibility of our court system. A major decision, like determining whether or not someone is going to prison, should not be determined by someone who could possibly be guilty of a crime himself.

Young women have been afraid of living in their country, but that did not stop them from speaking out against these injustices. Women are tired of being oppressed, and we are speaking up. Men are finally learning that their “norm” is not at all normal. Men are not going to stop women from coming forward to tell their stories and help those who are terrified to tell theirs. The women of America are a force to be reckoned with, for we will no longer remain quiet as men like Trump and Kavanaugh receive applause and power.

I will no longer stand on the sidelines, worried that no one will listen to me because I am just a teenager with an opinion. It is an opinion that matters. An opinion that can give hope to those who fear their country.

Maybe their voices are louder than mine, but that doesn’t mean that I am going to stay quiet.