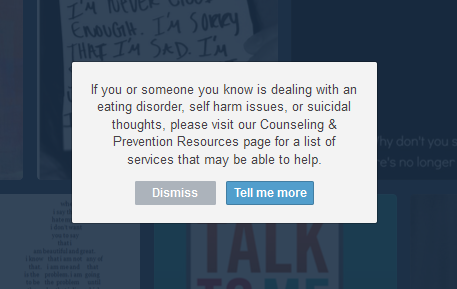 Beauty is Pain is Hunger: The Eating Disorder Community on Tumblr

About a year ago, I had stumbled onto a website bluntly named “MyProAna,” where a forum was discussing what their favorite “thinspo” photos were. They were using that term, “thinspo,” to describe anything that spurred them to keep losing weight, and it lead to the gaping black hole that exists quietly in the colorful, artistic front of Tumblr — the pro-eating disorder community.

The word “thinspo,” a cross between “thin” and the shortened version of “inspiration,” can be used to glorify photos of dramatically underweight people, introduce recipes with calories in the single digits, but, mostly, convey thoughts of a group of people that are suffering.

“Why should I eat if my thighs still touch?” “Hunger pains are your body eating away all that fat. I will be thin when I start getting dizzy from lack of food.” It sounds unreal, but it’s vocalized within this community, from page-long rants to hollow one-sentence declarations.

When this community is explored, it’s obvious that nobody is really living the same lifestyle.

An anonymous Tumblr account says, “My family’s always called me fat, and I always knew I was the biggest girl around.” Another adds, “I’ve always had really bad self-image problems, […] our gym teachers were constantly drilling into our skulls how bad it was to be fat […]”

On good days, they describe that they look in the mirror and like what they see, eating normally and believing they can recover.

But on bad days, they describe turning around every mirror in their house because they “just can’t stand to look at [themselves]” and either eat nothing or binge.

When the body is suffering from a restriction-based eating disorder, the hunger never disappears, gnawing slowly until it demands to be acknowledged, and binge behavior is released like water out of a cracking dam.

During a binge, a person eats an abnormal amount of food in a short period of time. They almost aren’t even tasting it, but are just eating because their body can’t handle being hungry anymore.

After a binge, some people may purge to try and erase the food they just ate, either by forcing themselves to vomit or exercising and pushing their body to a degree that’s unsafe.

Part of the reason why a binge is so detrimental to a person’s mental health is because it takes them one step away from reaching their ultimate weight goal.

Most people with restrictive eating disorders aren’t just starving themselves with no end goal in mind, they have a weight that they want to hit. For many, reaching this goal is the only circumstance that they’ll finally let themselves recover under.

When asked what they would do once they reached their weight goal, an account called “ventingissues” states, “I honestly just wish I’ll like myself a little bit more when I look in the mirror.” Another anonymous account admits, “I do know, deep down, that this isn’t sustainable […] unless I go into recovery, where I’ll definitely be forced to gain weight.”

What separates the eating disorder community on Tumblr from any other community that the Internet has ever seen is how large it is. 0.09 percent of the entire United States population, around 30 million people, are suffering from bulimia, anorexia, binge-eating disorder, or another variety.

The statistic is a meaningless number, but when one truly stares this group of people in the face, their own expectations of who these people are come crumbling down. They’re forced to peer into these people’s lives, see how real each and every one of them are, and realize that there is nothing they could possibly do from their side of the screen to force them to get better.

And hopelessness sets in.

It certainly felt like it when eight different eating disorder accounts allowed themselves to be interviewed, eager to answer my questions. When finished, almost all of them thanked me, wished me luck, and one even asked for an update if this article was ever published.

In the end, what’s most crucial here is that this group is humanized, and only then can this issue of how massive the eating disorder victims can come to light.

One of the accounts I interviewed, “boohoos-blog,” messaged me something that seems to conclude this article well. “I think it’s important that people realize that the ED community here aren’t some sort of monsters telling people to starve themselves. Mainly, it’s just a bunch of people suffering and trying to find some sort of support and sense of ‘I’m not alone in this.’”