Standardized testing in quarantine: how the closure of testing centers affects students. 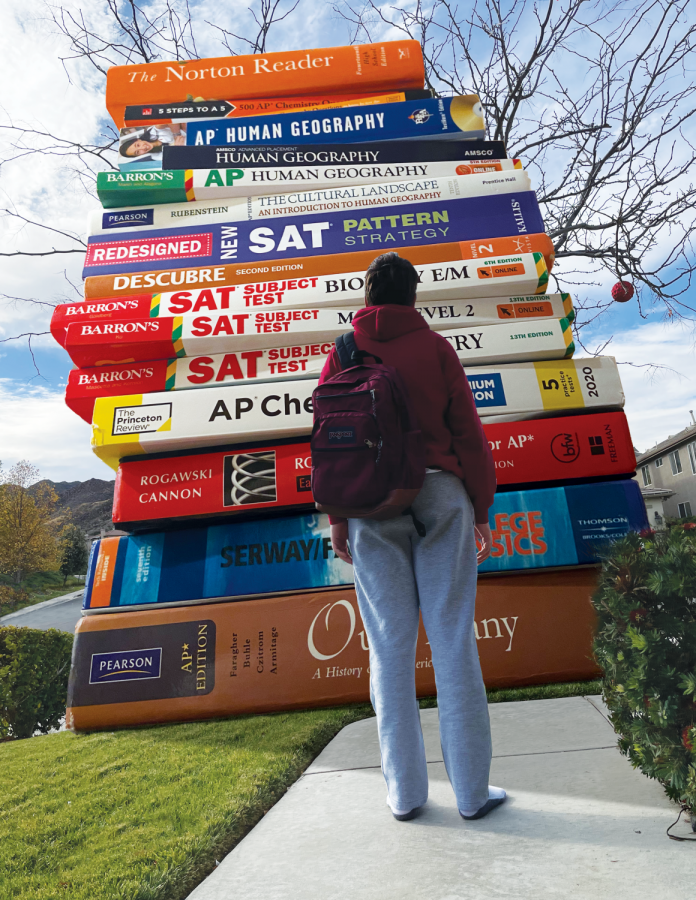 The coronavirus pandemic has significantly altered students’ lives. From sports being canceled to school being online, nothing is really the same. Standardized testing has also taken a hit. AP exams were all free response, open note and online. Meanwhile, the SAT/ACT have been cancelled for many months as testing centers were forced to close due to the pandemic.

“AP exams [last] year were really bad. I know a lot of people have an easier time with multiple choice and this year no AP exam had multiple choice so that really messed people up,” lamented junior Eric Lee. “It was kind of frustrating ’cause personally I’m better at multiple choice questions than free response, but due to it only being free response I think I could have scored a bit better with a normal AP test.”

The transition to online has made some teachers worried for this year’s exam, worrying their students won’t be prepared. Mr. Burrill, West Ranch’s AP Calculus AB Teacher, has had to completely redesign his class to overcome the hurdles students face due to online school.

“[Last year] was easier as it was just review. I knew who cheated on our [online] exams and who everyone’s friends were. It’s much harder teaching from scratch as I don’t know [the students]. It was much easier to know who was doing well and help those who were struggling [in person]. Now I rely on flex time to give students additional help, but the students who need it the most are usually not the ones who come.”

“The problem [with AP students] is that most are only concerned with their grade, but the kids who do the best in my class are the ones who care about learning the content and put the effort in. As I’ve learned by teaching this course for many years, those who put in minimum effort start to fall behind and don’t get the grade they want.”

Also, knowing [the College Board], the questions weren’t ones you could type in a calculator [so] you would need a good understanding of the content. I hope that they add [a multiple choice section] back to the exam, even if it’s online. There are many ways they can make the questions secure and [multiple choice questions] make it possible for students to be tested on a much wider array of information.”

AP exams were far from the only test affected. The Scholastic Aptitude Test, otherwise known as the SAT, has been used as a measure for academic ability ever since it was first distributed by the College Board in 1926. Then about three decades later, the American College Test (ACT), another exam designed to differentiate student from student, was created. For a long time, colleges used these tests as a way to gauge a student’s academic achievements. Though these tests have lost a little bit of their importance in recent years, they are still a huge milestone in a student’s life.

The senior class has been seriously affected by the change. Though many seniors take the SAT/ACT before winter break of their junior year, those who didn’t or wanted to retest would be in for a frustrating ride as the pandemic would cancel testing dates for the rest of the year.

Jayden Barnholtz, a senior at West Ranch High School, stated, “I mean initially [I wasn’t] really exactly sure how it was going to work. We kind of just thought [coronavirus] wasn’t gonna last that long. It was unfortunate that [the SAT] got cancelled in March ’cause I’ve been studying for that, but then I thought I’ll take it in June.” He continues explaining that his June appointment was then cancelled along with his August appointment.

To Barnholtz, learning the material wasn’t much of a problem, but he soon felt unmotivated to study due to the delays in testing as well as many colleges, such as the UC system, beginning to look past standardized test scores on college applications. Fortunately, Jayden was able to take the SAT at Trinity in September and October, though other students didn’t have the same opportunity.

The PSAT, another milestone standardized test for highschoolers, was supposed to occur in early October but it has been moved to January in hopes schools will be open by then. We asked Eric Lee who planned to take the PSAT, how he is dealing with the whole situation.

“I couldn’t apply for the [NMSQT] scholarship and I couldn’t really get any practice in as I was unable to sign up for the years before. Freshman and sophomore year I wasn’t able to sign up in time so not having the practice of an actual standardized setting along with the fact that I just couldn’t register for the actual scholarship was disappointing.”

Numerous underclassmen are also finding themselves in a bind as SAT Subject Tests have been continuously postponed. Most worry this time gap will negatively affect their score as it has been a few months since they have taken the class.

Unlike the SAT/ACT, which test your fundamental understanding of English and Math, the Subject Tests are similar to AP Tests as they only test one subject at a time. These tests, ranging from World History to Physics, aren’t required by most colleges, but can be used to differentiate students who are applying to more competitive degree programs.

“I wanna be a medical major so having these subject tests with science are helpful on [my] college apps but if I can’t take that then I can’t show them my understanding of the subject and my mastery of the subject as well,” said West Ranch sophomore Adhitya Ram.

With more and more schools moving to be test optional, standardized tests are now taking the backseat to extracurricular activities and grades in college applications. Though this change is sudden, colleges have been slowly moving away from standardized tests over the years. Some believe it’s a good idea. As Eric Lee put it, “[holistic admissions] show the more creative aspects of students through their essays and through extracurriculars. So it might be a good way for students to get accepted into college.”

The shake-up in standardized testing has affected students nationwide. Though colleges have shifted focus away from standardized tests, these exams were still important to the students we interviewed. Whether it was because they thought it would help them get into the school of their dreams, didn’t want to waste all those hours of studying, or simply wanted to fulfill this important milestone, everyone interviewed had one thing in common- they never stopped trying to take these tests, even if they needed to reschedule many times or drive an hour to another school.