An analysis of the recent hate towards Asian-Americans, and the impact it has on our community 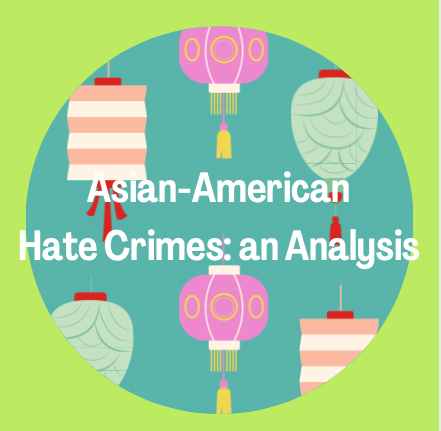 It seems that every time I check the news, there is a new innocent Asian victim of hate crimes. It sickens me that people target the elderly, the vulnerable in their pursuit of twisted ideals, blaming a race for problems that are not their fault.

The classification “Asian” is extremely general. Asia is the largest continent in the world and contains nearly 50 countries, including some of the most populated states like China and India. Asia also includes Pacific Islands like the Philippines, Indonesia and Sri Lanka. No matter how diverse our ethnicities, languages and cultures, we are defined by a common race in the United States and face the same struggles today.

I will not be covering all the recent injustices against the Asian community in this article. That is not its purpose. I want to explain the history and motivation behind the problem so that we may fight the mechanisms in place.

Asian-American hate crimes have soared in the past year, specifically in major cities such as L.A. and New York.

84-year-old Thai elder Vicha Ratanapakdee was murdered while taking his daily morning stroll. Jung Kim, mother of two, was assaulted at her business in front of her sons. An unnamed 65-year-old Asian-American woman was beaten severely on her way to church in New York City. Narayange Bodhi, 68, took public transit to his security job when he was hit unconscious by a man in the same car. 54-year-old Ming Liang was battered in the face by a pipe-wielding aggressor who screamed about his hatred for the Asian race.

Every one of these incidents was racially motivated, and occurred in the past few months. In addition, there are hundreds of thousands of instances where the aggression taking place was not major enough to warrant police reports, but left lasting scars and affected the mental health of those targeted.

Possibly the most jarring of all was the mass shooting at several Atlanta spas that resulted in the untimely death of eight individuals.

The victims of all the attacks I listed above are people. They all have stories, goals, hopes and futures that were warped by their experiences of hate. They were not seen as individuals with stories, but instead generalized into someone’s twisted idea of foreigners as an excuse for violence.

One must take into account that most first-generation immigrants do not speak up about acts of discrimination, so the spike of 150% more hate crimes towards Asians are likely higher than the incidents reported.

There were several factors that contributed to growing racism, like the political rhetoric of former President Trump who contributed to the disturbingly frequent pattern of using disease to justify xenophobia.

West Ranch AP Chemistry teacher Mrs. Chang admits, “Recently with quarantine, anytime my kids went out, I never prevented them from doing something as long as it was safe and responsible. I don’t want my children living in fear. That being said, with COVID and the rhetoric, and the continued increase in Asian hate crimes, I did hesitate because I knew that they were going out into a world that did not accept them wholly for who they are. That they might encounter people who would discriminate against them just because of the color of their skin. As a parent, as an Asian parent, I did fear for my kids. With the incredibly horrific incidents that have been happening, it’s devastating.”

Some amount of hesitance towards those different to us is not completely unfounded. It is a part of human nature to be wary of “the other.”

“I mostly feel sadness for people who are prejudiced against Asians,” thought Emily Doi, a West Ranch junior. “Don’t get me wrong; I feel anger towards them, too, but it makes me sad thinking about how much hate or ignorance someone has to harbor to be racially prejudiced. It’s one of those things where I genuinely can’t comprehend how someone could have that mindset.”

Hate crimes against Asian Americans are surging in the modern day and covered in the media, but the issue has been around for a long time, since the creation of the country itself.

There is a long history of anti-Asian, specifically Sinophobic, sentiment in America. In the Page Act of 1875, Chinese women were banned from immigrating to the country as they were labeled temptations for white men in a twisted hypersexualization of foreign females. Chinese men were soon blocked when in 1882, the Chinese Exclusion Act was published as the first and only ever federal law to prohibit immigration based on nationality, as reported by the Washington Post. In 1942, internment camps were created to imprison all Japanese, alien or citizen, simply because they were of a certain ethnicity. The establishment of such a system went against everything America stands for, and left trauma ingrained in generations of Japanese-Americans who would never again be able to assimilate into their communities due to stigma and paranoia, according to Smithsonian Magazine.

During the 1900s, Honolulu was hit with a bubonic plague epidemic, the first of its kind in the country. Bloomberg CityLab details that the population turned against resident Chinese, Japanese and Native Hawaiians, burning their houses and harming their livelihoods with the excuse of sanitation and targeted their businesses to be disproportionately affected by negative attention. A SARS outbreak in 2003 was accompanied by a spike in hate crime towards Asians even in the most “inclusive” of modern cities. Similarly in 2009, Mexicans and Latinos were stigmatized during the spread of the H1N1 virus due to speculation of its strain originating in their pig farms. The Harvard Gazette identifies a disheartening pattern to be found with scapegoating minorities for disease, separating Americans to no end with the repetition of history.

There is specific negative attention targeted on China and its people, as people claim its powerful standing in the world threatens our country. Sinophobia cannot be justified with political reasoning and perception of China as a competitor, as there are many Americans perceived as Chinese who are hurt and targeted as a result of the misdirected grievances. We cannot attack another country and its culture without directly harming some of our own, publically condoning the same treatment towards the Americans who identify with that culture. The actions of a state can’t be held against ordinary citizens that could not have taken responsibility for its politics.

The construct of the “model minority” is poisonous. I remember someone describing the position of race as similar to a family dinner. Asians are given a seat at the hypothetical table unlike other minorities, but are not placed in a normal chair. Rather, it is a baby chair. We are placed higher than the races not “allowed” to be at the adults’ table, yet we will never be able to be considered equal to those we sit with.

Society uses the model minority as a weapon against other ethnicities, citing selective success stories to undermine the struggles of the majority.

“I think the recent racism is a combination of the unproductive political discourse that has taken place over the last few years, people who feel discriminated against–and that goes both ways–and an inability to feel united,” Mrs. Chang deduced. “You have people who are not of color who feel they are also discriminated against. There is an ‘us against them’ in our heads. For as long as we choose not to listen to other people’s stories and only see things from a single narrative, we are continuing to divide.”

White supremacy has driven a wedge between all people in America, and established a racial hierarchy in which minorities fight each other to not be at the bottom, feeling threatened by the existence of the other.

Solidarity is so important, especially in the face of increased tension.

“I have so much love and appreciation for non-Asians who have supported the Asian community in this time, no matter if they’ve done it visibly or not. As much as this has been a time of persecution, it has been a time of community-building and communication, and I’m so grateful to everyone who has expressed empathy for our experiences. Even if it seems hopeless to try, as individuals, to erase this widespread hate, please continue to support us on this path from persecution to healing. It truly means everything,” expressed Doi.

It’s ironic that Asian-oriented hate crimes are soaring with the boom in global consumption of Asian culture. Unsurprisingly, there are individuals who love boba, anime, K-Pop and other products, but reject the humanity of the very people who create those commodities.

They use and they take, yet they cannot treat fellow humans with the barest amount of courtesy that should be provided for all.

I don’t think racism can ever disappear. That is not feasible in a country like America, where diverse people exist along with the instinct to fear people who are different from them. That does not mean racism should be accepted.

I’m tired of having to justify my existence as an Asian-American. It feels repetitive and disheartening to fight over and over for decency society will not grant me. What good does it do anyone, assaulting elders and innocents for the hate you feel? I am frustrated, but I will not give up. I cannot ignore these crimes because without consequence there is indirect pardon. None of this brutality is okay.

“A lot of our society can heal through empathy, but empathy is something that you need to work towards. Healing our society can only happen if people want to heal it. It’s as simple as that,” concluded Mrs. Chang.