On cultural dysphoria, its roots, and the effect it has on our world 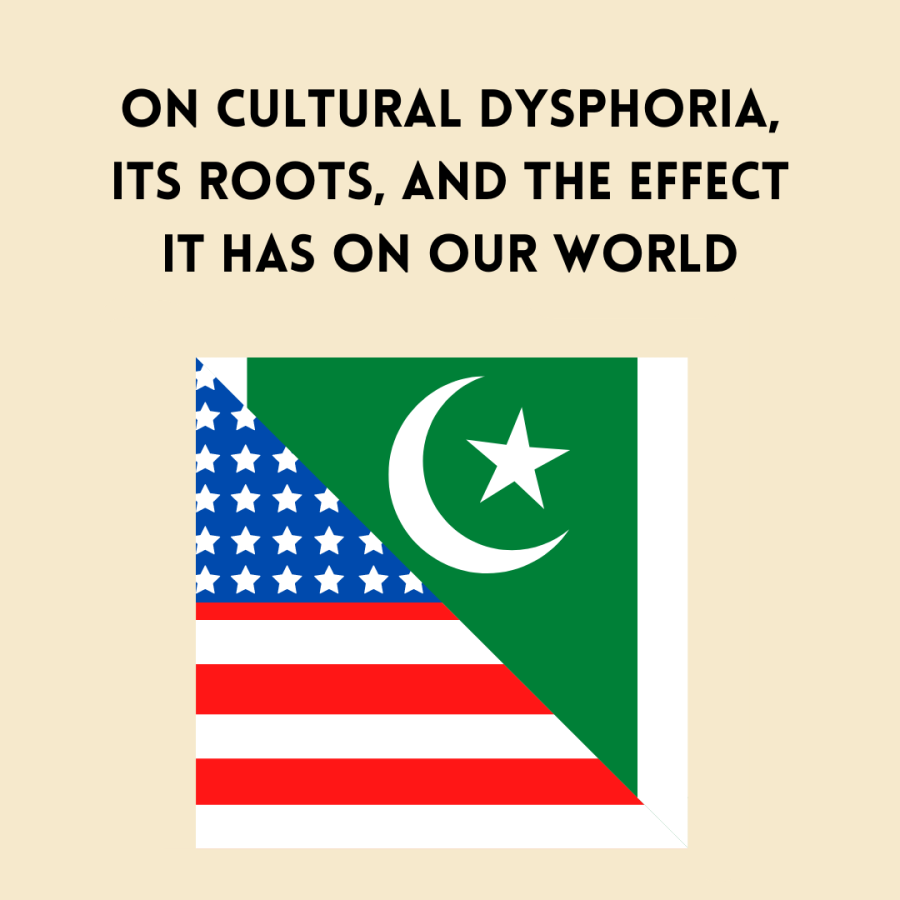 Cultural dysphoria: the term describes an uncertainty that a person feels about where they fit in terms of cultural categories.

I had originally heard of the word while doing research about immigrants like me who have a hard time finding their place in society, and feel out of place as a part of a certain culture.

I’ve heard many stories about this problem, and how it affects a variety of immigrant communities around the world.

Until recently, I had never really considered how this term applied to me.

As I walked out of the airport, I felt like I was stepping into another world.

The air was humid and sticky on my skin. The dark night sky was lit up with the orange glow of streetlights. The parking lot was a bustling mix of honking cars, passing rickshaws, trolleys and people— talking and walking about.

I, along with my mom and sister, were in Pakistan. The country where my parents were born, and where most of my family lives today.

My grandmother, aunt and cousins live in a sprawling flat in a neighborhood in Lahore.

As we walked in, I was hit with distant memories from when we had visited almost nine years before.

I remembered the basement, with its smooth tile floors, rough walls and rickety fan.

I remembered the dark mahogany stairs that seemed so steep as they led up 5 floors.

I remembered the mini garden, with all sorts of stones, succulents and large vines.

But at the same time, it seemed so foreign to me.

Over the next few days, we visited my dad’s family, who lived several minutes away. I awkwardly hugged family members who I hadn’t seen in a long time, and tried to make basic conversation with the limited Urdu that I know.

Even though I had talked to my family countless times over the phone, it seemed like I still didn’t know anyone, or understand the new environment that I was in.

Aside from meeting my family, everything seemed so different.

The styles of clothing were a world apart from California fashion.

The cities were contrasting to the places I had grown up in. Traffic ran in between the lanes of the streets, and I was amazed when I saw people on carts being pulled by donkeys or camels on the highway.

The culture was unlike anything I was ever exposed to. I silently cringed as I watched overly-dramatic romantic and action movies. I listened to traditional Pakistani music, as singers sang in the multitudinous languages spoken in the country— Urdu, Pashto, Punjabi, Sindhi, Balochi and many, many more.

I felt like I was a stranger in a familiar, but foreign, place.

My family and I came to America when I was one year old, so I’ve lived in California for most of my life.

Throughout my childhood, my parents tried to expose my sister and I to our culture, traditions and holidays. I grew up eating foods that were an important part of Pakistani cuisine, I wore the traditional shalwar kameez on fancy occasions, and I celebrated Eid, the day that marks the end of Ramadan.

And growing up as a Muslim in America, I, of course, had learned about 9/11 when I was young.

As I learned more about the aftermath of that day, I realized that I had never learned about one crucial aspect of it— the effect of 9/11 on the Muslim community. I had never truly grasped how much the world has changed in the past two decades. People changed, along with their ideologies and the ways they viewed other communities.

The events that happened on Sept. 11 led to an important cultural shift in America— one that has not been fully understood. In the aftermath of the attacks, the Muslim community around the world has been affected profoundly, which has often been greatly overlooked.

I often talk to my parents about what they experienced on 9/11. They lived in Canada at the time, but that day still impacted their lives significantly. Like the rest of the Muslim community, they watched the events of the day in fear, confusion and horror. My mom was at home, watching the television. She told me that out of the blue, she saw the breaking news. The camera zoomed in on the Twin Towers in New York, and she watched in horror as a plane came crashing into the first tower, bursting into flames.

She immediately called my dad, who was working in his office that morning. There was no TV in his office, so he rushed to an open-area restaurant nearby, where there were several. On the news, he saw the smoke billowing out of the first tower. He told me that he cried as he watched the second plane crash into the other tower several minutes later. He was terrified as another plane hit the Pentagon, and yet another crashed in a field in Pennsylvania. My parents watched the events unfolding around them in horror and fear. They didn’t know what was going on, and they were scared because they didn’t know what was going to happen.

In the aftermath of 9/11, their lives changed.

When my mom came to Canada, she regularly wore the hijab. However, after 9/11, she chose to remove it. People would stare at her when she was in the city, and she was scared whenever she went out. Wearing her scarf seemed to anger others, so she no longer wore it.

My family and I are fortunate. In the 16 years that we have lived in America, we have not received any direct hate or threats as a result of our religion. But a lot of other families haven’t been so lucky.

In the past 20 years, hate crimes against the Muslim community have skyrocketed.

According to the Harvard Human Rights Journal, FBI data displays a consistent increase in anti-Islamic hate crimes since 1995. Google News search trends show a definite correlation in the public between the terms “Muslim” and “terrorist.”

According to a February 2021 United Nations report on countering Islamaphobia, the rise in anti-Islamic hate crimes has led to almost 60% of Muslims reporting religious discrimination over the past 5 years. Innocent Muslims have been attacked and threatened, simply because of their religion and beliefs.

All of this has been the result of hatred that has been building up for many years. The media has perpetuated these negative stereotypes, and recently, anti-Islamic sentiments have been legitimized by public figures who repeat these ideas.

The root of the problem is complicated.

I’m not saying that those who believe in the hysteria are necessarily bad people. I think the events that have been happening are due to fear and misunderstanding.

9/11 created pervading stereotypes surrounding the Muslim community, and even though the demographic is viewed explicitly in a negative way, these misconceptions are most certainly not true. I can say that the vast majority of Muslims would never support the extremists who caused so much pain for thousands and thousands of families on September 11.

Learning about how Muslims have been affected by 9/11 created confusion in me.

As I began to truly grasp what happened on that day, I felt like an outsider in a country that I have known for my whole life. Reading about how Muslims are often viewed in a negative light made me feel uncomfortable about my heritage and culture, both crucial parts of who I am.

It made me scared. I was fearful of the notion that someone might judge me because of how I look or what my culture is. I was scared of the idea that someone could hurt my family and I, just because of our religion and nationality.

It also made me unsure about my place in America. How should I see myself on the cultural spectrum? Should I consider myself a Pakistani, or an American?

Cultural dysphoria. Finally, the perfect word to describe what I’ve been feeling.

In both America and Pakistan, it was hard for me to feel like I belonged.

When visiting Pakistan, I constantly struggled to fit in, because I didn’t understand any of the norms that were seemingly typical to my family who were born and raised there. It was a strange experience, because I never formed a bond with my family or culture. Everything I experienced there was new, and difficult for me to understand.

I was scared of not being able to fit in, and I felt like an outsider looking in.

Here in America, the experience is almost flipped.

I have lived here for almost my entire life, so growing up, I always felt like I fit in.

However, as I grew up, I began to learn more about the ways that my community has been marginalized in America, and around the world, for the past two decades.

This made it difficult for me to decide which side of the cultural spectrum I belong to. I wasn’t sure where I actually fit in, and I didn’t know if I should see myself as a Pakistani or an American.

I want to point out how strange the concept of cultural dysphoria actually is.

I want to point out how bizarre it is that many immigrants in America face this same dilemma, and are unable to recognize where they stand in the cultural spectrum.

Why do so many immigrant communities in America feel this way?

Again, the real cause of this problem is nuanced, and there are many different parts to it.

This cultural shift has been happening in America for many years.

After September 2001, many people began to view the Muslim community in a generalized way. People automatically began to associate those who attacked the Twin Towers as representations of the entire Muslim community. Thus, anyone who was a Muslim was linked to being a terrorist, or having the potential to commit evils similar to those of 9/11.

It’s important to consider that this isn’t a problem that plagues just the Muslim community.

In some way or another, every minority group and community of color in America faces similar negative stereotypes. Historically, this has often led to the marginalization of minority groups, who are viewed as “other” in these situations.

But, let’s consider the actual cause of these negative stereotypes.

The cause behind these stereotypes has mainly been misconception and a lack of understanding. People don’t have a deep enough comprehension of different cultures and people around the world. They don’t acknowledge the vast variety of lifestyles and customs, and have a rather close-minded view of the diversity of the world.

When considering communities of color, people are also often quick to judge. Cultures have been distorted, and entire communities are associated with a small percentage that often harbor extreme views.

This has divided minority communities, and led to hatred that has been bubbling over in recent years.

Solving this problem means that the entire country, and the entire world, will have to come together to bridge this rift that has formed between communities.

In order to do this, we have to go back to the source of the problem. There needs to be more dialogue between people. Different individuals from different places have to encourage cultural exchange, in order to increase understanding. However, the first, most important step is to take a moment to recognize how prevalent this issue is. We have to recognize how many immigrants and people of color are affected by cultural dysphoria in America, and around the world.

I am hopeful that the world can rise to the challenge, so that hopefully, nobody feels like they don’t belong. But, this can only happen if we choose to take a step back and confront the conflicts that have divided our world today.