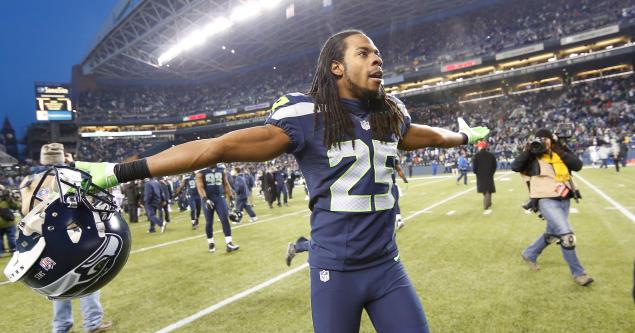 Seattle Seahawks’ standout cornerback Richard Sherman is one of the many who have criticized the potential ban of the n-word in the National Football League.

Whether it is used with a hard “-er” suffix or a supposedly affable “-a,” the n-word has stirred controversy among Americans ever since its birth as a pejorative slur against African-Americans.

This word is ever-prevalent in a National Football League that is 66.3 percent African-American, according to The Institute of Diversity and Ethics in Sport.  The use of this racial slur in the NFL has been thrown into extra scrutiny this past season after two scandals involving Riley Cooper and Richie Incognito — both white NFL players — using the n-word against an African-American person.

In response to these events, John Wooten, a former Black NFL player and the current chairman of the Fritz-Pollard Alliance for Diversity in the NFL, has urged the NFL Committee to implement a rule next season that would allow referees to penalize a team 15 yards for use of the n-word on-field.

Although it seems to have been presented with a moral intent, many players, analysts, and fans alike have expressed their contempt for the proposed ban of the racial epithet.

Others agree with Sherman and deem the attempted rule change as intruding African-Americans’ rights.  The connotation behind the n-word changes depending on how it is used and who uses it, just as any other word in the human language.  African-Americans have used the n-word for centuries, making it historically significant for Black people referring to other Blacks.  Thus, if the NFL puts this new ban in place, it requires Blacks exclusively to conform to a restriction of a part of their identity.  As Ta-Nehisi Coates writes in The Atlantic, the rule change “raise[s] a standard for African-American humans that does not exist for non-African-American humans” and is by definition, a display of discrimination.

“[This rule] focuses on Black folk being the problem because of how they choose to use [the n-word] amongst themselves,” said sports journalist Stephen A. Smith on his daily debate show “ESPN First Take” with Skip Bayless and Cari Champion. “Does anybody see the flagrant hypocrisy in that?”

Still, others believe that the ban would affect the ways that African-Americans engage in football.

This makes the NFL Committee’s job extremely difficult.  But even if the NFL decides to adopt such a rule, many think that the ubiquitous use of the n-word will not be slowed.

“I think that [the ban] would ideally be beneficial for society because it would teach younger fans that the word is not good to use, but I think it’s completely unrealistic,” said West Ranch High School senior wide receiver Max Mazur.  “I hear it at least 20-30 times a game, and this is in high school football, so I can’t imagine how often it’s used in pro football.  All I can say is bad habits die hard.”
As the NFL Committee struggles to reach a decision, it will be interesting to see how criticisms and justifications will continue to unfold regarding this intricate controversy.