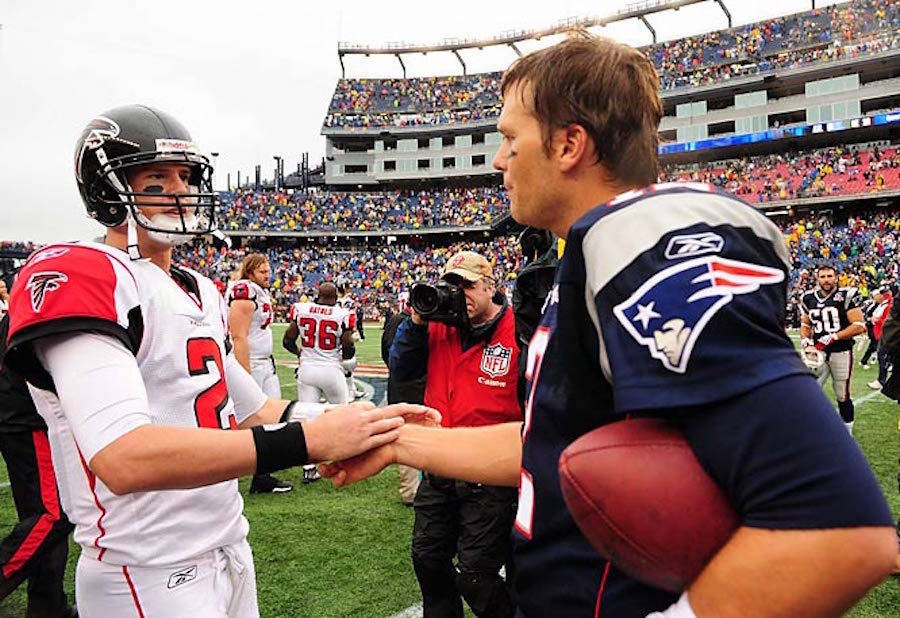 Why the Falcons Will Capture Their First Ever Championship

The Atlanta Falcons have been flying high all season long, and they only have one landing spot in mind: a Super Bowl victory.

Meanwhile, the New England Patriots have made their yearly ascent to the top of the NFL and look to defend their perch as the NFL’s best.

This year’s Super Bowl is shaping up to be one of the more exciting championship games in recent history, and the game will be taken by a Falcons team that is just as exhilarating.

Granted, this game won’t be an easy final showdown for the Dirty Birds. This year’s version of the ever-competent Patriots are coming in with the league’s best scoring defense, electric Super Bowl hero Malcolm Butler, and a 39-year-old Tom Brady who’s playing like he’s in the midst of his prime. The Patriots have dominated all season long, and their championship-churning machine is working just fine.

Still, the evidence all points to the Falcons earning their first ever championship. Matt Ryan has been the best quarterback during a season where Aaron Rodgers was turning in magic performances on the regular, and he has already torn through the postseason. With nearly 5000 yards, a 70 percent completion rate, and 38 touchdowns to only seven interceptions, Matt Ryan has played as cool and smoothly as his nickname, Matty Ice, sounds. Running backs Devonta Freeman and Tevin Coleman, who could each be superstars by themselves, have created a lethal one-two punch that has already demolished opposing defenses. Wide receiver Julio Jones continued to put up video-game like numbers, and doesn’t look to stop anytime soon. Free-agent Alex Mack has led a offensive line that has served as a brick wall for Matt Ryan and allowed the team to own the highest-scoring offense in the NFL.

And that’s just the offense. On defense lies Vic Beasley, a quarterback-terrorizing machine who lead the NFL with 15 ½ sacks, along with Deion Jones and Keanu Neal, two rookies who have played far beyond their years. Yes, it’s not a defense littered with superstars, but it’s a defense that has been successful nonetheless. They were able to stifle a blazing-hot Packers offense, and the unit evolved as the season progressed. While the Patriots do carry the ageless wonder of Tom Brady and a random assortment of talented receivers, this Falcons team is facing one of the weaker offensive units for New England, especially with the absence of freak-of-nature tight end Rob Gronkowski.

Ultimately, it’s the offense that’s going to carry the Falcons to a victory in what will likely be a shootout-style game. One minute the Patriots will score, and the Falcons will respond by blazing right back across the field for a score of their own. Their defense will make enough brilliant plays to stall the Patriots, and the offense will navigate the team to their first ever franchise Super Bowl title.

Yes, the Patriots have boatloads more experience in the big game than Atlanta, and Tom Brady can certainly guide his team to a fifth Super Bowl over a relatively inexperienced squad. But this Falcons team isn’t your typical newbie team, and they are equipped with all the tools and weapons to cultivate a title win. Their last step is simple — do what they have been doing all season long.

Patriots Are Still the Team to Beat

At 39 years old, most men are finally learning the art of making a killer cup of coffee. Tom Brady? At 39 he’s mastered the art of winning world championships. Just in case you haven’t watched the playoffs in the last decade and a half, Terrific Tom doesn’t lose. As long as No. 12 on the field, the Patriots are destined for Lombardi Trophy No. five.

First off, let’s just clear the air here. I absolutely believe Atlanta’s Matt Ryan has had an MVP caliber season. A pinch short of 5,000 passing yards, 38 touchdowns, and only seven interceptions is no joke (even on Brady standards). It’s actually been a few years since I’ve seen a quarterback control the field the way Matty Ice has. What makes me wave the red flag is his experience in big game situations. Ryan is a measly 3-4 in playoff games over the course of his career. Brady is 24-9. Experience is priceless, and Matt Ryan and the Falcons will learn that lesson the hard way Sunday night.

Ever since Brady was drafted 199th overall in the 2000 draft class, he’s played every snap like he has something to prove. That motivation grew even larger when league commissioner Roger Goodell set a four game suspension on Brady in the wake of the deflategate scandal. If you ask me, nothing would be funnier than to see Goodell hand over the Lombardi Trophy to the man he attempted to punish. Additionally, this could be Brady’s last chance to break the tie between Joe Montana for Super Bowl wins in a career. Pair those two motivations together, and somehow Brady becomes an even deadlier threat (if that’s even possible).

If there is one thing the Patriots can do on defense, it’s to take the most explosive player on the other team out of the game. We saw it in full effect in the AFC Championship when the Steelers’ MVP running back Le’Veon Bell was held to only 30 yards from scrimmage. Defensive coordinator Matt Patricia has made massive improvements from last year and has kept guys like A.J. Green, Antonio Brown (twice), DeAndre Hopkins, Doug Baldwin, Demaryius Thomas, and Emmanuel Sanders from singlehandedly beating them. Expect Atlanta wideout Julio Jones to play a very limited role if the defense can keep this trend up. If playing in the Super Bowl wasn’t stressful enough, Ryan will also have to revise his game plan and force himself to throw to less appealing receivers. In a showdown of the the best versus the best, one slip-up can cost the game, and a pick or two is almost inevitable for an already anxious Ryan.

On the flip side, the Falcons defense ranked fifth worst in the league and often struggled to contain pass-happy teams throughout the year. If you at all believe in the phrase, “offense wins games, defense wins championships,” the Falcons are in no way prepared to win this game. After leading corner Desmond Trufant went down with a hamstring injury, no playmakers are left in the secondary who can stop the Pats high-octane offense.

As a Broncos fan, I have firsthand witnessed the Patriots go down. It can happen. However, I just can’t see the Falcons being the team to do it. Patriots roll 42-31 in a shootout Super Bowl contest.