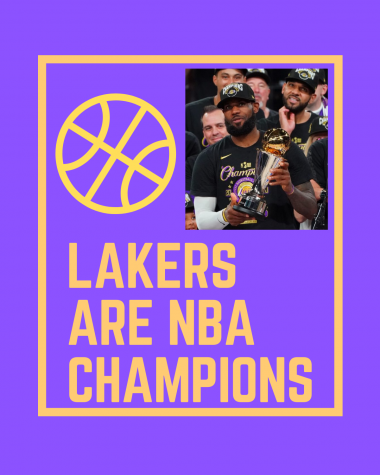 It has been almost six months since the NBA finally decided to continue on with their season. However, this time, instead of playing in their normal arenas, players are competing at Disney World’s Wild World of Sports. That’s right, the NBA decided to resume their games at Disney World to avoid risking players getting COVID-19. The official date of the NBA restart was July 30 where the top 22 out of the 30 teams were invited to participate.

After arriving in Orlando, every player, coach and staff member was required to go into quarantine for 10 days before actually starting the games. Players were assigned their own rooms where they were given essentials such as clothes, food and medication. Players are not allowed to leave the park and have to follow strict rules pertaining to social behavior. Everyone in the bubble has a mandatory coronavirus check multiple times every day in order to keep everyone safe. One unique way that the NBA is keeping players, staff and coaches safe is by having “smart” rings and Disney MagicBands. What is a “smart” ring you may ask? According to CNBC, they revealed that it is essentially a ring that everyone must wear with special technology throughout the interior of the ring that measures body temperature, respiratory functions and heart rate. This ring has the capability of predicting coronavirus symptoms three days in advance with 90% accuracy. Furthermore, Disney MagicBands are used for players to check into hotel rooms-they must scan this bracelet against a scanner to make sure they do not have any symptoms. Fortunately, the NBA has had zero players who have tested positive for COVID-19 so far, showing that their system is effective.

Moving to Orlando is a very difficult task for all the players in the bubble because they have left their families without knowing when they were coming back. When asking NBA superstar LeBron James in an interview with ESPN about the big adjustment he stated, “Sacrificing my family at times, you know was the most challenging and hardest part about it all.” Many players shared the same ideas as James: missing their loved ones and hoping to reunite with them after the season.

The 22 teams invited to the “bubble” played eight regular-season games to try and secure a top sixteen spot in the playoffs. During these eight games, one undefeated team blew away everyone’s expectations: the Phoenix Suns. Shooting guard Devin Booker had amazing games averaging to 31 points, 4.6 rebounds and 6.1 assists. Unfortunately, this would still not be enough to get to the playoffs. In the Western Conference, small forward LeBron James and power forward Anthony Davis have dominated through the competition to make it to the NBA Finals. With the Lakers’ size alone they were able to outperform the rest of their opponents. However, this was no walk in the park for the Lakers. Point guard Jamal Murray and the Denver Nuggets averaged 31 points, defeating the second seed Clippers to make it to the Western Conference Finals. This was surprising to many fans because the Clippers had just acquired NBA superstars Kawhi Leonard and Paul George and were thought to be the only chance to beat the Lakers. Many wanted to see the L.A vs L.A matchup, but were instead surprised with the outstanding performance from Jamal Murray and center Nikola Jokic.

In the Eastern Conference, many were shocked to see the Miami Heat make it to the NBA finals as they were only the fifth seed of the east. Many predicted that the Milwaukee Bucks and Giannis Antetokounmpo would make it to the Finals after Antetokounmpo’s monster performance this last year. However, what made the Heat a top competitor was that it was not a one-man team; everyone on the team exceeded expectations, including Jimmy Butler, Bam Adebayo, Tyler Herro and Goran Dragic. Furthermore, shooting guard Timmy Butler and power forward Udonis Haslem would also benefit the team as they show guide the team towards the right direction defensively and offensively.

When asking West Ranch freshman Carsen Yahata about what made the Heat so successful he stated, “I think what made the Heat so great was that they had a great coach which helped them drastically on defense.” All these players were key to the success of the Miami Heat as they would make outstanding plays during tough times. Furthermore, the Heat would go on to defeat another team, the Boston Celtics, in the Eastern Conference Finals. Despite this, the strong teamwork of the Heat would lead them to the Finals where they will play their toughest opponent yet, the L.A Lakers.