For the first time since 1988, the L.A Dodgers are World Series Champions. The Dodgers won a six game series of the Fall Classic at Globe Life Field against the Tampa Bay Rays on Oct 27. With this win, the Dodgers now have a total of seven World Series Championships including years 1955, 1959, 1963, 1965, 1981, 1988 and 2020. Interestingly enough, the last time both the Lakers and Dodgers won championships in the same year was 1988.

Despite the Tampa Bay Rays losing, they did put up a good fight. A big part of what kept the Rays in the game was Blake Snell, a pitcher for the Rays. The 2018 AL Cy Young winner had an impressive 18 strikeouts out of 38 batters between Game 2 and Game 6. His elevated fastballs and breaking balls proved to the Dodgers that he was a threat on the field. His astonishing performance made him the first pitcher to strike out nine batters through the first four innings of a World Series since Sandy Koufax.

If it wasn’t enough for L.A fans to have the Dodgers win the World Series, one of the Tampa Bay Rays’s pitchers is from our hometown of Santa Clarita. According to MiLB they revealed that Tyler Glasnow was born and raised in Newhall, Santa Clarita, and attended Hart High School. He eventually committed and played college baseball for the University of Portland and was later drafted to the Pittsburgh Pirates in the fifth round of the 2011 MLB draft. On July 31, 2018, Glasnow was traded to the Tampa Bay Rays alongside Austin Meadows and would help his team make it to the World Series. He would become the starting pitcher in both Game 1 and Game 5 of the World Series. During Game 1, he would play for 4.1 innings and have 8 strikeouts. Throughout Game 5, he would play for 5 innings with a similar 7 strikeouts.

When The Paw Prints asked West Ranch freshman baseball player Ethan Yim about the Dodgers’s key to victory, he stated, “I think what made the Dodgers so successful was both Mookie Betts and Clayton Kershaw making big plays.” Even when Betts wasn’t batting he still contributed to the team by stealing many bases. Clayton Kershaw was very important to the Dodgers because his slider pitches is what often got the Rays’ batters struck out.

Furthermore, players like Cody Bellinger, Justin Turner, and Corey Seager were also important to the Dodgers’s success. Bellinger’spowerful swing made him a huge threat to the Tampa Bay Rays. To add on, the Dodgers’s third baseman Justin Turner was essential for the Dodgers as he has hit an average of .357 in three 2019 National League Division Series games. Last but not least, Corey Seager has been important to the Dodgers because he dominates no matter who he is playing against. Seager is one of the best shortstops in the league averaging a 0.307 batting average and winning the World Series MVP.

In an interview with Spectrum Sports Clayton Kershaw spoke about how he felt after their win, stating, “I can’t put it into words yet, I’m just so very thankful to be apart of these group of guys and that we get to be on the same team that is bringing back and World Series to the Dodgers fan after 32 years.” Dodgers fans all around the world are celebrating the victory their team took. The Paw Print wishes them luck next year. 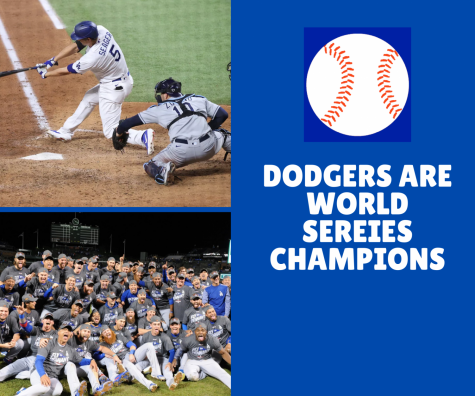