Many were excited for a boxing match happening at the Staples Center on Nov. 28, 2020. The much-anticipated match was a brawl between internet sensation Jake Paul and former NBA veteran and three-time slam dunk champion Nate Robinson. However, this night also brought out two retired boxers: “Iron” Mike Tyson and Roy Jones Jr.

Throughout the fights, everyone besides the boxers were required to wear a mask. This included all filmers, judges, and referees, as well as the boxer’s team. Everyone in the arena was socially distant while the referee tried not to have much physical contact with the two boxers. Furthermore, instead there being only one referee, they actually had one for each match. Due to the recent spike in COVID-19, no spectators were allowed in, making the fight virtual.

During the fight between Paul and Robinson, most spectators thought that Robinson would walk a clear path to victory due to his athletic experience in the NBA. Despite this, Paul’s 6’1, 189-pound physical build would tower over a 5’9, 180 pound Robinson. This would give Paul a four inch height advantage despite the fact that he is 13 years younger than Robinson.

In the end, it was Paul’s significant edge in boxing training that proved to be the difference: earlier this year, Paul fought against AnEsonGib, a fellow YouTuber. On the other hand, Robinson only started boxing in August 2020 after he called Paul out to a boxing match.

During the first round, Paul did very well in holding off Robinson’s athletic leaping attacks, which would lead to grappling and clinching. After a couple of the same moves, Paul began to time Robinsons’s forward attacks and caught him with a right hand to the side of the head that would drop Robinson onto the mat. As he regained his strength, he held the back of his head trying to tell the referee, Thomas Taylor, that the blow was a rabbit punch. In boxing, a rabbit punch is a punch to the back of the head or the base of the skull and is considered very dangerous as it can damage the cervical vertebrae and the spinal cord.

Throughout the second round, Paul kept landing clean shots with the right hand, dropping Robinson for the second time and leaving him pinned under the ropes. Shortly after, Paul would land a three punch combination that would knock Robinson out cold, dropping face first. Referee Thomas Taylor instantly waved off the fight with 1:35 on the clock, after Robinson was not getting up. This meant that the match ended in a knockout, otherwise known as a KO.

In an interview with Triller, an American video-making and social-networking service owned by Proxima Media. Paul stated, “He was athletic and super strong. I just want to say thank you to Nate. He was the one who originally called Paul out and I respect him. His basketball career was great and I don’t want to take anything away from him.” During this interview, Paul also noted that he wanted to fight people such as Connor Mcgregor, Dylan Dannis, and other YouTubers including his own brother.

During the following exhibition fight between legends Mike Tyson and Roy Jones Jr., it was nearly impossible to predict what would happen. Mike Tyson was the early favorite because he was the youngest heavyweight boxing champion at the age of 20 and was known for knocking out his opponents early in the match. However, both lasted eight two-minute rounds that led to a draw by the WBC-assigned judges’ scorecards.

Overall, the fight was a little rough, and neither man really committed to a true volume of strikes. Neither seemed to throw more than two punches before clinching onto each other. In the course of the first round, Tyson seemed to land cleaner punches and throw somebody shots while he and Jones were clinching. Jones was visibly more fatigued, but continued to try and get out of the fight, bringing more energy in the later rounds. This would benefit Jones at the end as it would score enough late round points to cause a draw.

After the fight, Tyson told interviewer Jim Gray, “I’m used to doing it for three minutes. Sometimes that two minutes felt like three minutes. I’m happy I got this under my belt to keep doing this and go further.” Following this, it is safe to say that we could see Tyson in a fight in the future.

Many people thought that Tyson should’ve won the fight and thought that he displayed more experience. “You missed a good one this time: Tyson wanted the KO to the end; Jones had to use every trick in the book to endure those shots,” said George Foreman, a former American boxer in a tweet from Twitter. Overall, this boxing match was very entertaining for spectators as sports were canceled many times this year. 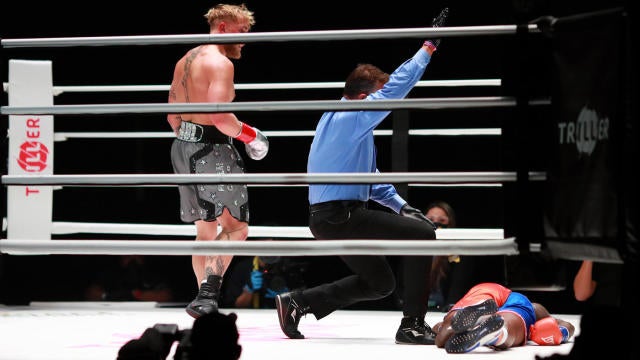