When one thinks of sports, they may think of basketball, football, baseball, or soccer. However in sport, many do not think about is shot put and the hammer throw. Under the category of track and field sports, shot put and hammer throw are one of the most difficult sports to perfect.

Here at West Ranch, we had a chance to interview Matthew Krogh, a senior athlete who competes in the shot put and the hammer throw. Krogh told The Paw Print that at the age of nine, he was “trying out different sports, and ended up being pretty good at shot put,” so he “stuck to it.” By practicing five to six times a week, he still strives to improve every single day.

Krogh’s natural talent and hard work are the reasons why he has become so successful in this sport. In life, he aspires to be like Elon Musk, a business magnate and engineer who is most famous for being the designer and CEO of SpaceX and Tesla. In shot put, however, he aspires to be like Ryan Crouser, an American shot putter and discus thrower who won the gold medal for Team USA at the 2016 Rio de Janeiro Olympics, and Tom Walsh, a New Zealand athlete who is the current national record holder in both outdoor and indoor shot put.

When asked what he thinks is the most important physical and mental trait to have in the shot put and hammer throw, he stated, “Mentally, you need to be focused every practice, and physically you need to be lifting trying to get stronger, while also developing quick twitch muscles.” An average training day for Krogh starts off with working on technique, then doing stairs, plyometrics, sprints or light cardio, then to go lifting. In all, this process takes four hours of his time.

During competitions, Krogh tries to stay focused on the game and his technique. He oftentimes has a list in his head about what he needs to improve while also trying to clear his head and stay relaxed. This seems to be very helpful for Krogh as he is currently throwing a 12 pound shot 56 to 57 feet, and a twelve pound hammer 185 to 190 feet. He can even clear a distance of 160 to 165 feet by throwing a 16 pound ball.

His stats are so good, in fact, that he has been scouted by many prestigious colleges. Krogh explained, “The recruitment process was pretty stressful. I filled out a few athletic questionnaires and emailed a few coaches, and got responses from Dartmouth, Yale, Stanford, UPenn, UCLA, USC, and Duke.” Krogh was so dedicated that he was sending daily videos of him throwing and lifting to these coaches, while also communicating with them via phone and Zoom calls. In the end, Dartmouth, Yale, Stanford and USC were all very interested in Krogh, so he took a visit to all of these schools on his own, since official visits were canceled this year.

“Throughout my recruitment process and during my visit,” Krogh said, “I fell in love with Dartmouth’s campus, the feel of the school, the team and the coach.” Krogh felt that Dartmouth Coach Jeff Forino truly understood technique and specific muscle training for throwers, while also being very lighthearted and fun with his mannerisms and training. The future college athlete also highlighted that he loved the small classes, academic excellence, Greek system, professors and the extremely tight-knit alumni network. With all this in mind, Krogh committed to Dartmouth in October.

The greatest athletes play sports for the enjoyment of the game, and Krogh is no exception; he loves the competitive aspect of shot put, and every day he tries to outwork and compete with other players, teammates and himself. As his time as a college athlete approaches, The Paw Prints wishes him the best of luck on his journey on Dartmouth’s track and field team! 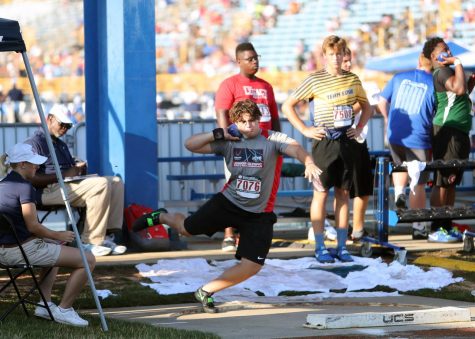