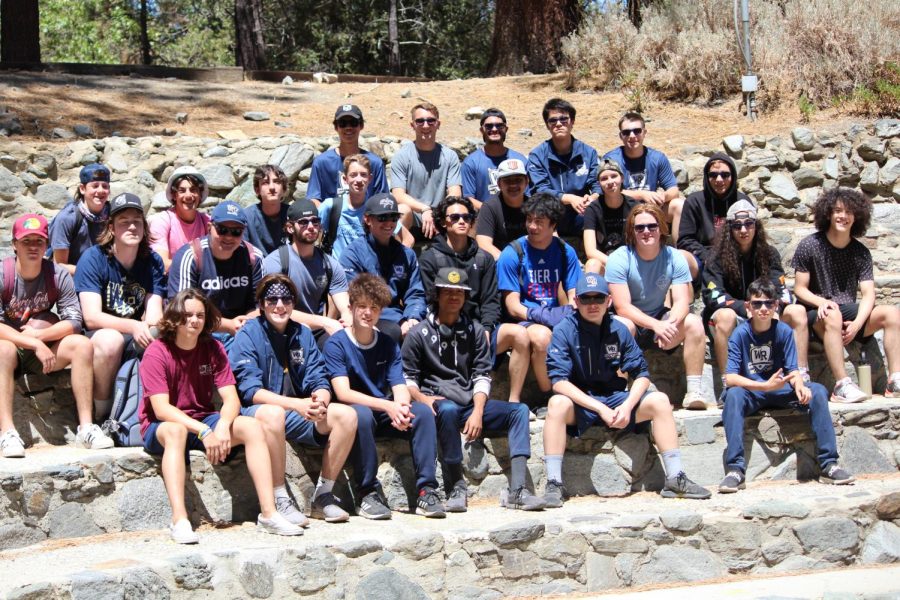 As a means of team-bonding and preparing for the upcoming season, the West Ranch Varsity and Junior Varsity hockey teams participated in a weekend long camping trip near Big Bear from Aug. 20 to Aug. 22.

On Friday, Aug. 20, players arrived at The Cube, Santa Clarita’s local ice rink, and boarded a bus to Camp Wrightwood. Upon arrival, players were given time to acquaint themselves with the campsite and go over the agenda for the weekend. Friday’s itinerary consisted of free time and a wide variety of games so that the players could get to know each other.

Because the main goal of the trip was to create bonds between teammates and promote a sense of team spirit, phones were taken away to reduce distractions and encourage face-to-face interactions.

“These trips bring about a huge point of camaraderie, so that these kids know each other, everybody is comfortable with each other, and then by the time we’re actually playing hockey, it becomes a lot more fun,” explained Junior Varsity Head Coach Matt Keef.

Players participated in various activities, ranging from archery and volleyball to hikes in the mountains. Due to the competitive nature of both teams, many activities became friendly competitions between players, with the winner obtaining the ability to decide what workout the others had to do.

Even though the weekend was labeled a hockey team trip, Varsity head coach Dylan Matanzo explained that, “It goes beyond hockey: this is about creating memories. High school is such an important part of the kids’ lives that you want them to experience these types of things and be able to look back on them later.”

During the first full day of camp, Saturday, Aug. 21, participants engaged in an early morning workout, which ended in a run through the mountains and culminated in the campers getting lost. With no cellular signal and no bearings on their location, players attempted to exercise their teamwork skills to find a way back to camp, but ended up having to get rescued by team coaches.

The rest of the day was spent partaking in a plethora of activities such as knockout basketball, cornhole, 3v3 volleyball and pool time. Players received plenty of free time in order to forge the necessary bonds with each other, in the hopes that “It’ll bring us all together on a more personal standing, so we’ll have more chemistry on the ice and we’ll play better and have better teamwork,” expressed West Ranch junior and JV assistant captain Ethan War.

Perhaps the most anticipated activity of the weekend arrived Saturday night: the infamous West Ranch camping trip karaoke session. Players competed to see who could karaoke the hardest; many different styles of performances were displayed by various groups of participants, while spectators cheered on their teammates.

Sunday, Aug. 21 marked the last day of camp, and coaches and players alike were able to reflect on the importance of the weekend’s events and talk about going forward with the season. While contemplating the weekend’s activities, War expressed that “Last year, our season was really short, so it [was] nice to come out here, to camp, with all the team members, and bond, because we didn’t get much of that last season.”

Coach Keef revealed similar sentiments, saying that the weekend “helps bridge that friendship. And hockey being the sport it is, where everybody’s always criticized about one thing or another, it’s nice knowing that you have your friends that are trying to lift you up and help you out, and not sit there and take you down. Having these trips, it gives us the ability to build bridges between players. There’s really nothing else out there like that.”

Looking into the future of both hockey teams, both coaches talked about their core values going into the season. While Coach Matanzo explained that his main goal for the Varsity team “is getting these kids to a point where they feel comfortable with each other, they feel comfortable on the ice, and working with them to get them to the next level,” Coach Keef told The Paw Print that “the general game plan is usually about teaching toughness. A good chunk of kids come in here, they’re not really knowledgeable on hitting, and hitting being pretty much one of the biggest things in hockey, I start there and try to build from there.”

Heading into a new season means setting up new goals and coming up with a realistic plan of action. When asked about hopes for this year’s team, War concluded that “Last season, we made it to championships, we made it that close, but we just have to regroup and hopefully we can get back there again.”

Wildcats, catch both West Ranch Varsity and Junior Varsity playing their next home game at The Cube, on Oct. 10.