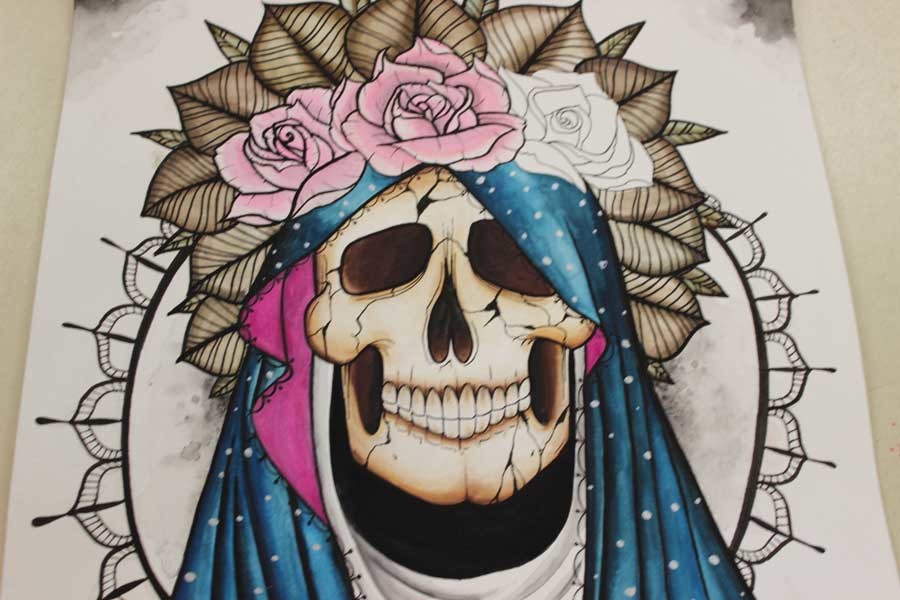 Most kids take an art class because it’s a graduation requirement. But for people like Luis Reynoso, art is a part of their identity. These are the people who sketch in all classes and stay in during lunch to finish an art piece. Reynoso does mostly tattoo style art, although he admits he’s interested in comic book style drawings as well. Tattoo art has dark black outlines and usually uses very bright colors, since those would look better on the skin. “I feel like a lot of people don’t get to see this kind of art. Nowadays we see more realistic and modern pieces. I like it because it usually has a very distinct, dark outline which gives it a really cool effect,” said Reynoso. With his extraordinary talent, one would think that he has been doing this his whole life. But when he signed up for Art 1A, he had no idea what he was doing. However, his art instructor, Sally Rush, had other thoughts. “I saw it when we had our first drawing. He was really interested in it and he was sketching all the time in his notebook. He was always very quiet, but I know he tries his hardest and understands the concepts,” said Rush. Reynoso has a talent that is nearly indescribable. When he envisions something, he sees it in a different way. He can take something very typical, such as a portrait, and turn it into something that reflects his style. The art nearly comes alive on the paper, and you can’t help but stare. “If you lined up all of the pieces my students have created, right away you would know which one is Luis’,” said Rush. His art is very detailed, and usually is a concept that hasn’t been seen before. He adds vivid colors and black outlines, but his art is so spectacular because of the focus of the piece. The objects range from women just in circus-like attire, to dark and mysterious birds, staring at you through the fog. Reynoso is planning on pursuing art in college, and looking back he can’t believe how far he has come. “For anyone who doesn’t know if they would like it, just try it. I didn’t know if I would like it and now I’m in AP Art. I mean there are a lot of things to try, so you have to find what’s right for you” said Reynoso. If you aren’t sure what you want to do as an elective, give art a try. You never know what could happen next.