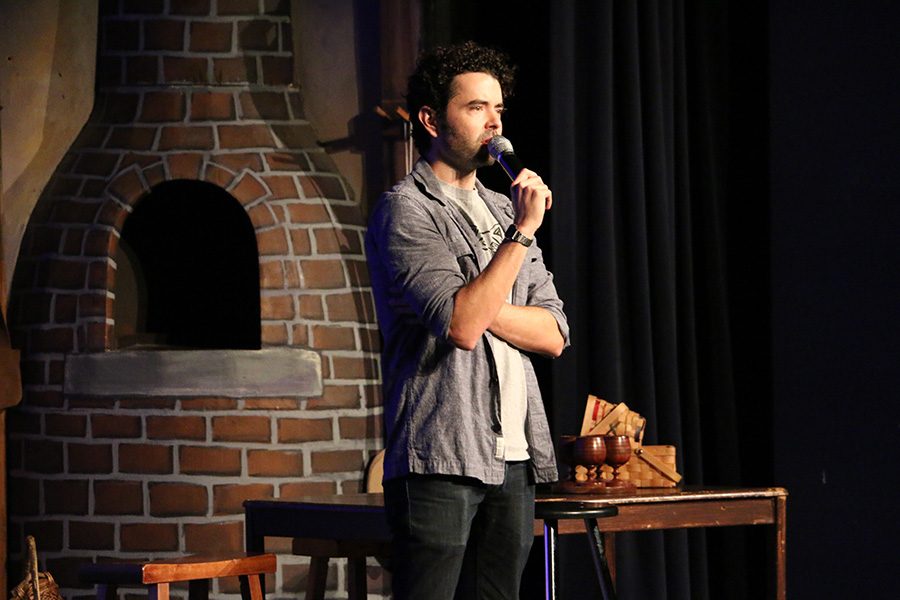 “The world and this path will take you to different places, so I guess enjoy the ride, and really just consume and absorb it all,” says actor and comedian, Nick Rutherford.

On Oct. 27, Rutherford visited our school to share insight on a life of acting and comedy. He discussed his career, what he did when he was in high school, and all the highs and lows to his career so far, including working for Saturday Night Live. After he presented some of his work students were able to ask for advice, tips, what a career like his is like, and how to get to where Rutherford is today.

Rutherford’s advice ranged from writing and getting into the business to getting the “big break.” In actuality, Rutherford thinks he never got his big break at all.

“I don’t know if I had one, [because] it seems like it was more of a series of smaller breaks. This recognition led to us getting a meeting with that manager, and that manager led to us taking a meeting somewhere else where we got to pitch a show. Pitching that show allowed us to produce a pilot a year later. So, it was really more a matter of small steps. I think that people have this notion that somebody’s gonna come down from like some insane higher up and is gonna say ‘you’ve made it now’ and ‘you’re good.’ Maybe it has happened for some people, those really incredibly lucky people, but I think for the vast majority it’ll be better to rely on just having small conquests or small victories, and building up on those and building your network around them.”

Students laughed at brief clips of Rutherford’s work, including an SNL skit involving The Rock and a promo for his new show, “Dream Corp, LLC.”.

“I think he was so funny, especially what he said about writing, because I’m a writer. One hundred percent, I’d want to have a career like his. It’s actually my dream career to be a writer on a show like “The Office,” so that was super cool to see,” says Sanborn.

From aspiring writers to comedians, Rutherford’s information directed students in their future career paths. As for his best advice for students, he says, “the best thing is to start as early as you can, and to do every element of it. If you want to be an actress or actor, a writer, or a director, you’ll probably be doing something dramatically different, so you’re gonna be within the same world, but you have to be flexible.”