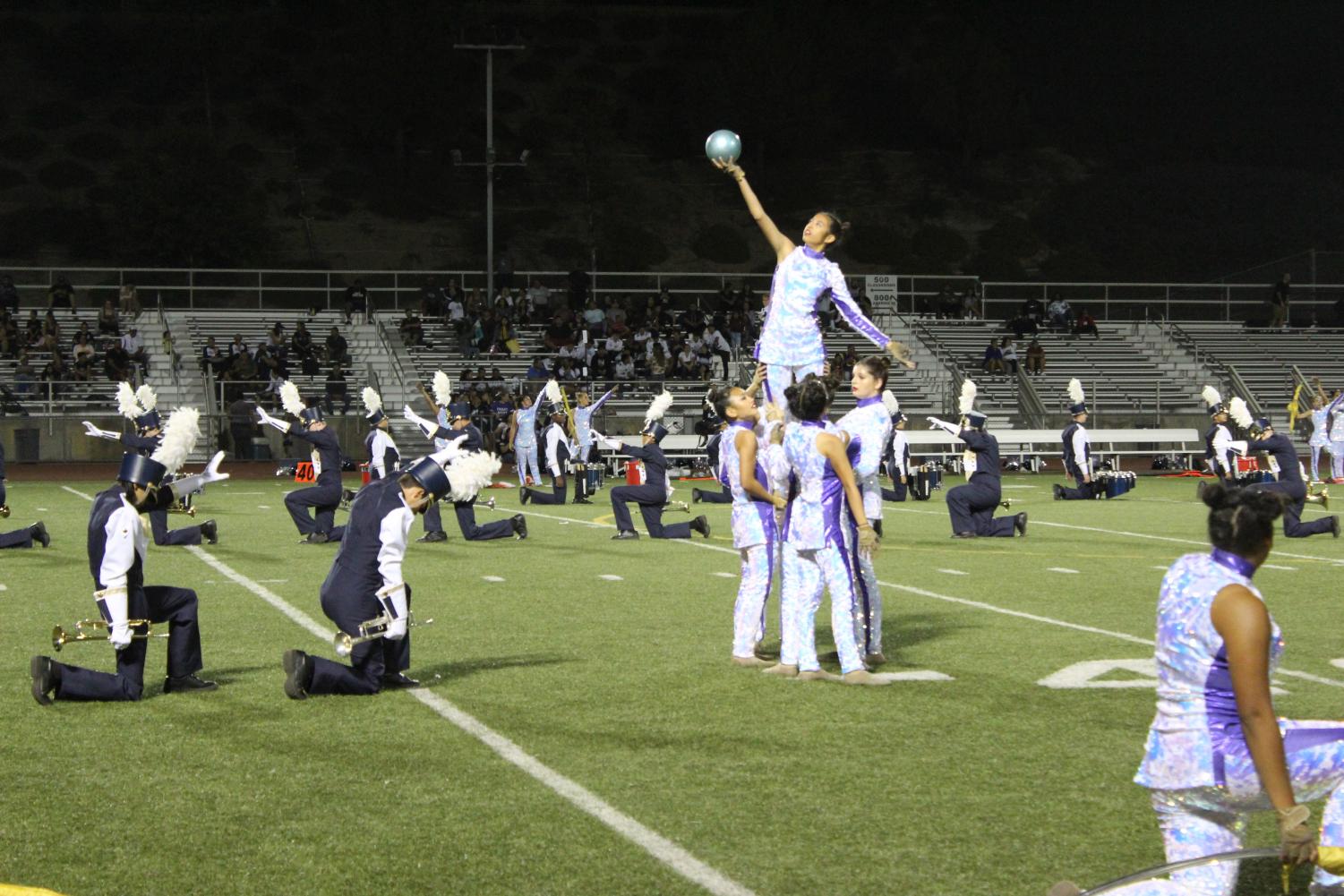 The band stands frozen with their backs to the crowd, and the colorguard lays on the ground with their glittery costumes. The percussion pit members are looking up at the crowd, ready to send them all to space. The drum major starts conducting, and everything is silent until you hear a resonating G made by the low brass.

On Aug. 31, West Ranch Marching Band performed their show “Celestial” at the halftime show during the football game at Valencia. Although the audience had felt stress all throughout the Friday football game, the band’s intergalactic storyline eased the tension and resulted in applauds from the stands.

Despite the band not being able to completely finish their show before their first performance, they made their performance on Friday was top-notch.

Starting off the show with a G note made by the brass, the rest of the band and percussion soon joined in. This gave a nice, slow introduction so the audience could build up anticipation for what was about to come. The color guard suddenly came to life, with their dazzling glittery costumes, dancing around the field representing the stars.

Mimi Asfoury, a freshmen color guard member, performed on the football field for the first time this Friday. She said, “We [the band] don’t really know what to expect because this is the first time we’re performing the show, so it’s kind of a trial run for us. I’m nervous but at the same time, I’m not.”

As the show progressed, the intense visuals and over-the-top musicianship took the audience’s breath away. The movements switched from upbeat, fast tempos to slow chorales, and the visuals they were performing matched the tempo of each piece of the show.

Each member of the band had a different opinion as to which element of “Celestial” was the best, but everyone worked together to create a stunning performance throughout the entire show.

A member of the saxophone section, Amanda Fife, said her personal favorite part of the show  “has to be at the end of the ballad when we spelled out ‘Luna,’ but the whole show was really fun to perform overall.”

The ending was soon approaching, and the band gave us an ending we wouldn’t forget. Lucas Davis started off the beginning of the ballad with a husky Baritone solo, and everything was quiet and peaceful until the entire band came in. All together, the band was able to produce a big sound that made the audience feel as if they were landing on the planets.

As soon as the last note was played, Matty Frierson, head drum major, conducted the whole band in a “Band ten hut!” This is always where all the performers must stand still in playing position, looking at the crowd.

The West Ranch Marching Band had just performed “Celestial” for the first time to the public. For some people, it is going to be hard performing each show knowing their time is running out as a marching band member. I talked to some seniors and each of them said how much they were going to miss this band.

A band senior said, “We get our senior pins this year, and I think that really sets in stone that ‘wow this is my last year.’ It’s gonna be hard thinking about leaving.”

West Ranch Marching Band is a family, and their hard work and dedication as well as their passion for music is what created the beautiful performance we saw on Friday.

Thank you for your music, West Ranch Marching Band. We are so excited to see what you do in the future!