Why I Want to Be a Cat: What We Can Learn from Our Beloved Pets About Social Belonging 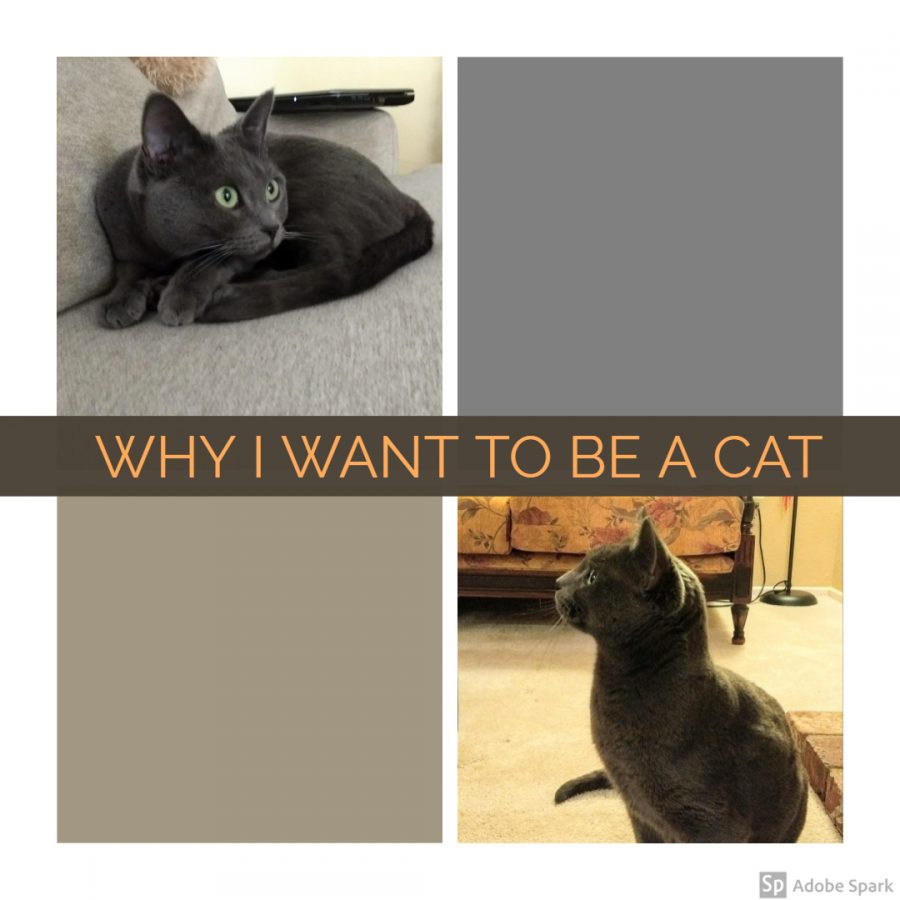 Cats live freely. They may be a human-dominated species, but most of them have the freedom to lay around all day, adventure into the wilderness and eat when they like. They’re majestic creatures, and they’re admired by so many without truly doing much. Unlike dogs, who provide the unconditional love that makes up for it, they boss their owners around and suck the attention out of them. Yet millions, including myself, love them. Humans, however, are very different.
We are living in the midst of a society that declares our spot within it for us, living among someone else’s dreams and living along someone else’s definition of success: When generations continuously follow this route, they are obligated to steer away from their true being, and their happiness is compromised.
Many high school students find themselves stuck in the middle of this dilemma. A huge recurring theme in the life of many teenagers is the feeling of not fitting in. If a person feels as if they don’t “fit in” — whether that be in a high school clique or even in the middle of a long marriage — he or she is prone to loneliness and isolation. Both the former and latter can harm a person’s sense of well-being.
Belonging is the feeling of comfort in one’s position. It’s the wave of relief after one is guaranteed safe. Belonging is the ability to resonate with others, share common interests and ultimately build off of each other. And it’s entirely difficult for some to achieve.
Whilst walking in the halls of a crowded school filled with teen angst and stress over finals, it’s inevitable that I would come across the words “I want to die” in one form or another. Now, this can be a cry for help, but in pop culture, the phrase is commonly used as a dramatized version of what they feel. They may not actually want to die; they just throw the words out for effect.
However, no one should ever feel this way whether it’s said in vain or not. And the fact that it has been engraved in almost every teenager’s — including my own — life is a problem. The root cause of this feeling is usually the fact that people feel as if their abilities don’t amount to the expectations of their society.
They feel as if they don’t belong.
Unlike humans, cats don’t need to go through the uphill battle of higher education or do meaningful work to live “successfully” because their society isn’t as complex as ours. That is entirely fair, in fact. I would be concerned if it weren’t true. However, as time passed, society has packaged higher education and meaningful work into a set of expectations applicable to everyone. Cats simply just live, and they get what they want. No matter what, they will belong.
I had a group of the most loving friends. They were four girls that I thought, at the time, I would spend the rest of my life with. I found myself starting off in a different direction than them, hanging out with an older group of people instead. There was some sort of toxicity in my old friend group that led me to leave. I had different ideals and morals in life that conflicted significantly with theirs. I had my own problems, and I needed a break from the people I loved.
I felt as if I didn’t belong.
With that in mind, it’s important to also consider that everyone’s definition of anything is different. An apple that may be green to Becky is bright red to Jack. And neither of them are incorrect for perceiving it that way. Say, everyone but Becky thinks that the apple is red. Just because she sees it different doesn’t make her wrong. She might be physically impaired, but she isn’t wrong.
The same goes for success (since success seems to be our ultimate goal). Earning a million dollars a year as a highly ranked lawyer may be what Becky perceives as success, but it truly is a personal definition. It is so personal that it boils down to what makes an individual happy. If labeling the apple “green” makes Becky satisfied, then so be it.
So be it. The people who feel as if they belong are the people who become happy with themselves and their abilities. After all, that is one of the major goals in most people’s lives.
So be it. Let people think what they want. They can’t harm you as long as you don’t let them. Let them belong! Accept the fact that they think differently, and move on.
Now, here comes the hard part: accept the fact that you think differently, and move on. Maybe your parents will provide bumps in the road to being yourself, or maybe it will be your school. But in all honesty, the only person stopping you is you.
The human race has made little progress in the department of social belonging. Though it is “little,” it is still progress. Schools open their doors to clubs that support different interests. Parents are starting to accept their children as who they are. Interventions are held to create a safer environment for those who don’t feel as if they’re accepted.
However, none of that will be enough to change the fact that each and every person on this very earth does not belong to somebody else. Despite this fact, the true significance in social belonging comes from the individuals themselves.
Cats have every right to be happy where they are in society, and so do humans. So let yourself belong. No one can really tell anyone how to do that, so I’ll fight shy of attempting to guide you. But everyone needs a start, and hopefully, this is yours.